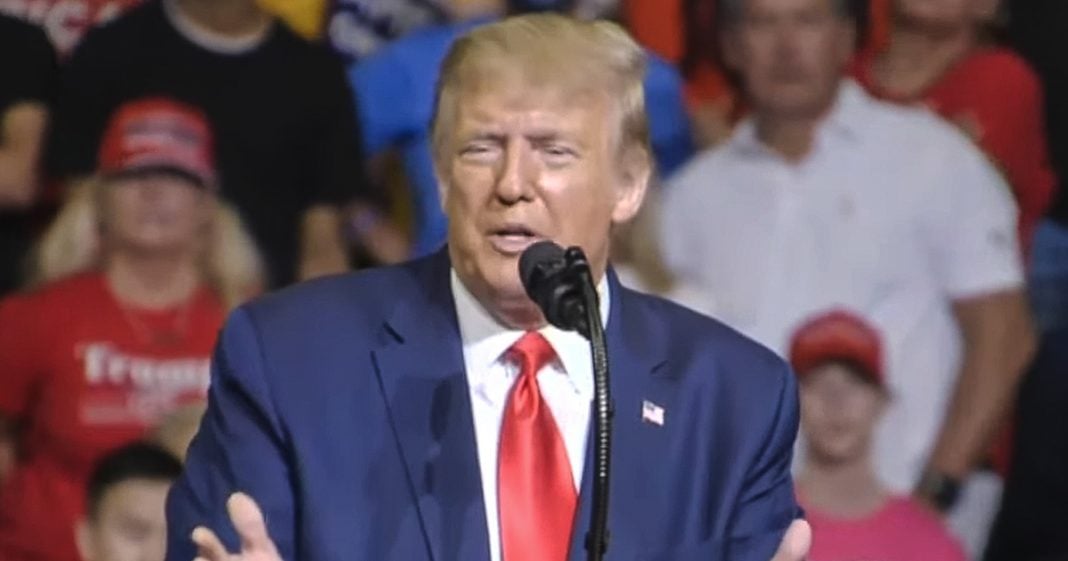 In a bizarre move, Republicans have decided to block the press from being present at Donald Trump’s re-nomination ceremony in August. This is incredibly abnormal, especially considering how much Trump loves being in front of the camera. Are they going to be giving the President a reality check behind closed doors, or will they be pledging their undying loyalty to the madman? Ring of Fire’s Farron Cousins discusses this.

The RNC announced, uh, late last week that they have decided to do things a little bit different, uh, with the way their convention is going to play out. Uh, later this month. Now, originally, as we all know, the whole thing was going to be in North Carolina, but then the North Carolina governor said, I am not going to ease up a mask ordinances or social distancing guidelines in order for you to have a packed house for Donald Trump’s convention, speech, just not going to do it, it’s not safe. So then Trump says, okay, well, I’m going to go down to see my buddies in Florida. Cause these suck ups will do whatever I ask him to. And then he moved part of his convention down to Jacksonville. Then Florida got the massive spike in coronavirus cases. Republicans were unable to raise enough money to pay for the needed security for the Jacksonville, Florida convention, where Trump was going to speak. So they announced like two weeks ago. Okay. We’re canceling that part. We’re just going to go back to North Carolina. We’re not going to have crowds.

It’s just going to be our delegates, uh, and uh, politicians. And we’re going to be okay with that. Here we go. Don’t worry about it folks. And then late last week they were like, Oh, by the way, uh, members of the press, you’re not going to be allowed to come. That is unprecedented. That is the first time in these nominating conventions that they’ve ever said, press media. You’re not welcome here. Cause the whole thing. Um, and I’ve been to one and it’s it’s God awful. It’s a circus. But the whole thing is all about media. Getting all the eyeballs you can on this convention, getting your people in front of a camera, getting your people on radio shows, getting your people on podcasts. That’s essentially what the conventions have become in modern times. Get as many people in front of as many cameras as possible. So you get that convention bounce.

And strangely enough, the Republicans said, Hey, we know we got a guy that we’re re nominating that that loves the cameras loves being on camera, but we’re not going to let that happen. So the question that remains is why is it because they can’t trust Donald Trump to not get in front of a camera and say something stupid, possibly that, that sounds like a very real possibility. And if that is the case, that is a very smart move on behalf of the Republicans, Donald Trump, can’t say something stupid on TV. If you don’t let him get on TV. So there’s that, there’s also the possibility that Trump in his renomination acceptance speech could say something horrible. And I think, think we all know what I’m talking about there. Um, so you probably don’t want the press to see that if it happens, of course, the delegates, every is be filming this stuff on their phones.

Anyway, the food is going to leak if he says something awful, but Hey, at least it won’t be on CNN for like two days, uh, after he says it. So there is that possibility. There’s also another darker possibility. It could be because the entire Republican party is decided to stop trying to fight him. And they’re just going to blindly accept him. They’re just going to blindly follow. And maybe they don’t want the media to see them in North Carolina or wherever it is. They’re going to do it just straight up kissing his ass the entire time. Maybe that’s what they’re embarrassed of. Maybe that’s what they’re ashamed of. Maybe that is what they don’t want the public to see. But either way, no media, no press is going to equal no convention bounce. So that’s going to hurt the president, especially at a time when he could desperately use any kind of uptick in the poll numbers that he can get. But this is a smart move by the Republican party because they know that this man can not be trusted when he gets in front of a camera.