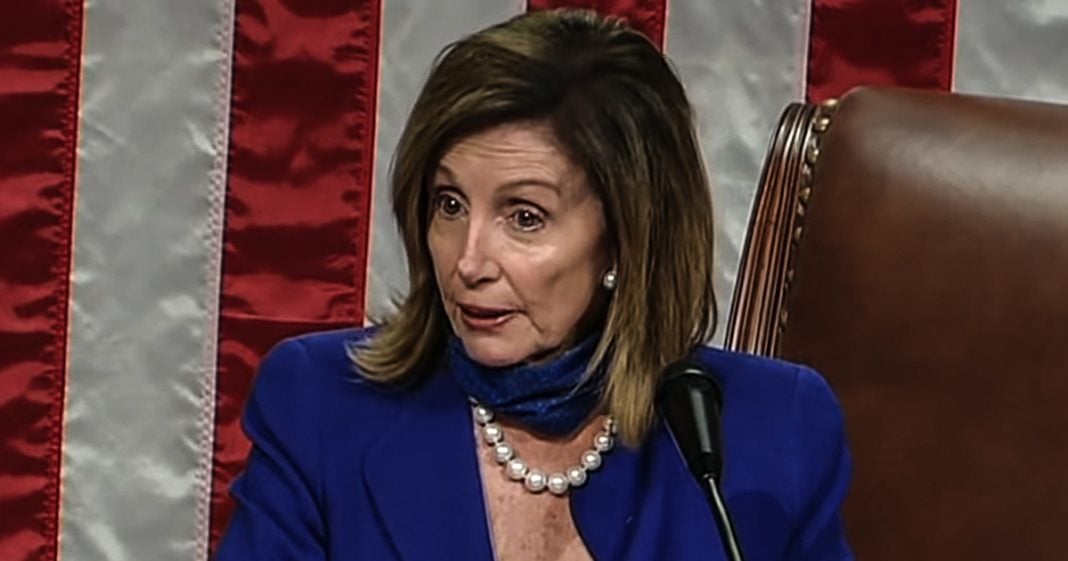 If ever the country needed a leader to emerge from Washington, D.C., it would be right now. But instead of being a leader, House Speaker Nancy Pelosi is locked in a battle of name-calling with President Trump and symbolic gestures for the public. She is letting his disgustingly bloated budgets become reality, and she’s not doing anything to help protect our children. Ring of Fire’s Farron Cousins discusses this.

What this country needs right now, more than anything else is a leader. We need somebody in a position of power in Washington, D C because that’s also important. They have to not just be a leader. They have to be in a position where they can actually do something, but we need that. And unfortunately, as it stands right now, we do not have that. And that’s terrifying. We know that Donald Trump is about the most incompetent president we have seen in our lifetimes, uh, his handling of multiple different national crises at the same time has proven that we know the Republicans are always self-dealing self-serving jackasses. That’s never going to change, but every now and then we have hope that, Hey, Democrats are going to do the right thing. Democrats are going to stand out for us. Democrats are going to protect us and guess what folks, they haven’t done a damn thing.

Not one thing as this nation continues to one live in fear. And to wonder how we’re going to make it out of this pandemic alive, or at least the leadership in the democratic party. Hasn’t done that. And of course we know Chuck, Schumer’s not going to do it, but what about Pelosi? Right? Nancy Pelosi, speaker of the house of representatives. There’s a big fight. Uh, I don’t know if everybody remembers this, but at the beginning of 2019 big fight, uh, between progressives and establishment Democrats over whether or not Nancy Pelosi should be the speaker of the house of representatives, could she handle it? Was she up for it? Was she going to actually be a leader in stand up to Donald Trump and the establishment swore up and down that she was, she eventually gets the nod, gets the job. Then it’s been an absolute disaster folks.

I don’t care where you fall on the spectrum of the left, whether you’re corporate, a centrist or a full blown socialist, there, there is no way for anybody in that spectrum to say that no, Nancy, Pelosi’s done a good job. She really has. Oh, she’s really stood up to Donald Trump. Oh, when she announced last week that she’s going to come up with a new nickname for him. Mr. Make things worse. How did that help you pay rent? By the way, when Nancy Pelosi came up with that new little nickname for them, how did that pay your rent? Cause I’m curious to know what the fuck she is doing because the answer is nothing. We’ve got some great gifts from her, right? Yeah. The, the clap, the ripping of the papers who boy. Yeah, that’s awesome. That’s bad-ass a thousand Americans a day or die. Um, tens of millions.

My, my be vetted, uh, in the coming weeks. What is she doing about that? I know she’s approving Donald Trump’s military budgets, um, and his over bloated, regular budgets too. Um, but the American people haven’t gotten another stimulus check. Yeah. That we, we got the one April and then we haven’t gotten anything since then we need a leader, not somebody who can come up with probably one of the dumbest nicknames I’ve ever heard. That’s not even funny or clever. Hey, at least summit Donald Trump’s nicknames. He kinda make you chuckle a little bit. Pelosi’s just awful at damn near everything. There was a time when she was effective. There was a time when it was clear that she cared. Those days are gone.

That is not who we have as the speaker of the house of representatives. Right now, this is embarrassing. And Nancy Pelosi has had every opportunity to rise up and be a leader and do something to protect the American people. And she has failed. The opportunity was laid right in front of her. And she failed. And anyone who says differently is lying point to one thing. One thing that she led on. One thing that she has personally done to give Americans hope during this time when we desperately needed a leader, because that’s all I’m asking for right now is one thing and it doesn’t exist. And I’ll say it again. Anyone who tells you differently is lying to you.