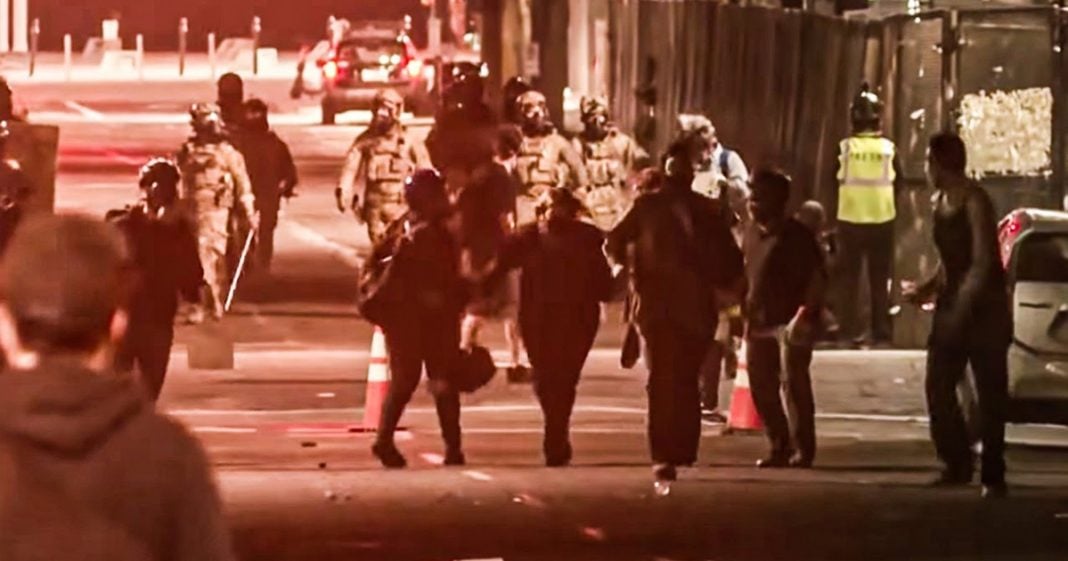 According to protestors in Portland, the reason that tensions in the city continue to grow is because Donald Trump’s Stormtroopers are perpetuating it. This is not the first time that this claim has been made, and this isn’t the first city where this has been implied, either. These troops are clearly trying to carry out an agenda on American streets that will benefit Donald Trump, but so far it doesn’t appear to be working. Ring of Fire’s Farron Cousins discusses this.

Earlier this week, uh, Oregon governor Kate Brown announced that she had reached an agreement with the Trump administration. They were going to be pulling Donald Trump’s stormtroopers out of Oregon, out of Portland. Um, and they were going to be replaced with Oregon state police. Now that announcement was on Wednesday. The two days that followed that the Trump administration actually escalated their efforts with the federal agents in Portland. Trump is now actually threatening to send even more troops to Portland after he already made a deal with his democratic governor. So he’s already reneged on the deal said this isn’t happening. I’m not pulling my troops out of your state. I might even send more. So why is that important? It’s important because Trump’s troops are the aggressors. This is very clear by the way, from all of the available footage. And this is also why Trump’s cries of law and order, you know, trying to relive the Nixon days of the sixties.

Cause that’s what Nixon ran on a, that’s why it’s not resonating with voters because we can see the footage. Now it’s not selectively curated by, you know, three media outlets. Everybody who has a cell phone is now essentially a media outlet. And they’re capturing these videos. We are seeing Donald Trump’s thugs go out there, snatch piece, a peaceful protesters off the streets, stick them in an unmarked vans and drive them off. We have seen them shoot peaceful protesters in the face with rubber pellets. We have seen the photographs of the damage. We have seen people’s mothers who helped form that wall of moms. This was a disturbing footage that came out the other day. Uh, they posted pictures of bruises all over their bodies, including their faces and heads, because that’s where they’re being shot with these rubber bullets for doing nothing more than standing arm and arm blocking these federal troops, Donald Trump’s troops are the aggressors. You know what else? Folks, that is how this story is actually being portrayed accurately in foreign media. It’s only the media here in the United States, where there is this, you know, let’s frame it this way.

Let’s frame it this way. Let’s go the Andy know thing and say, it’s all Antifa, which doesn’t friggin exist. Media overseas gets it. And it’s probably easier for them to, you know, looking from the outside end. You can see the bigger picture a lot more clearly. But what we can see is the footage from the people on the ground. They aren’t the ones out there attacking the soldiers. I don’t care if you agree with the protesters in Portland or not that that’s beside the point right now, it’s clear that they’re not the aggressors. Antifa has never even been accused of killing a human being. Whereas right wing groups have absolutely been responsible for murders, both inspiring them and carrying them out. That’s a fact, A lot of the things during these protests that have been blamed on Antifa we’ve now found out were instead actually committed by right wing agitators disguised as black lives matter, protesters, their narrative, the narrative of Trump, the narrative of Fox news and Breitbart and daily caller and people like Andy know has fallen apart.

They’re still trying to push it, but nobody’s buying it except their own echo chamber, which is getting smaller by the day on this issue. Trump is the aggressor, the U S whatever military branch Homeland security is, is out there. They are the aggressors and the public understands it. And Trump is going to keep his troops there to keep agitating these protesters in the hopes that one of these protesters is going to attack his troops, because the second they do that footage is going to be all over the American media. Don’t feed that beast, go out there, protest. There will be legal defense for you. I promise don’t retaliate because right now the public’s on your side and you can keep them that way. As long as Trump’s people are the ones who are the only aggressors right now, that is the case and the public is getting pissed and that anger is going to carry over into the November election. And hopefully it’ll be enough to get this crazy man out of office.