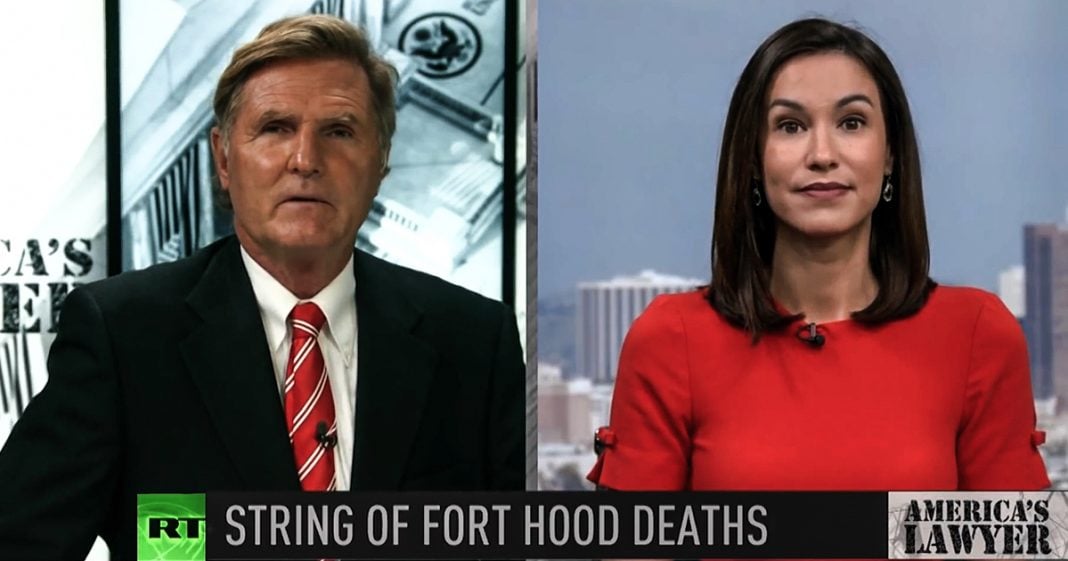 Via America’s Lawyer: Yet another body was recovered near Fort Hood army base in Texas. This is the fourth dead soldier found there in a month, further adding to the compound’s robust history of violence and harassment toward personnel. Mike Papantonio is joined by Brigida Santos to explain more.

Mike Papantonio: A third soldier stationed at Fort Hood has been found dead in the past month. The families of the deceased are looking for answers at the troubled Texas military base. Brigida Santos is here to talk about this. Brigida, we’ve been through this story, seemed like we covered a similar story about a year ago. Which soldiers have been found dead over the past month and what do you, what do you know about these cases and how do they tie together in your estimation?

Brigida Santos: Well, over the past 30 days, the bodies of three soldiers from Fort Hood have been found and another turned a gun on himself in an apparent suicide. The most recent death is that of 26 year old private Mejhor Morta whose body was found 16 miles from the base near still house hollow lake. A preliminary autopsy lists drowning as the cause of death. But a full autopsy is pending and an investigation into his death is ongoing. Now this comes several weeks after the body of 20 year old army specialist, Vanessa Guillen, was found in a shallow grave.

She was reportedly bludgeoned to death on the base by another enlisted soldier named Aaron David Robinson. Now his girlfriend has confessed to helping him dismember and dispose of Guillen’s body. Robinson then fatally shot himself when the authorities tried to arrest him. And at the end of June, the remains of private second class Gregory Scott Morales were discovered in a field, foul play is suspected there, and that investigation is also ongoing, Mike.

Mike Papantonio: You know, Fort Hood, and as we, you and I have talked about in the past, has a history of violence and misconduct that goes, goes way back. And I, it seems to me, it kind of lands on the whole dysfunction of management of that organization, not just Fort Hood, but some of these other military bases too. What’s your take?

Brigida Santos: Absolutely. Now Fort Hood has been the scene of violence and misconduct for decades. Over the years, reporters have documented violent crimes at the base, including aggravated assault, robbery, kidnapping, homicide, rape, attempted rapes, and even child pornography. There have also been at least two mass shootings. And in 2015, a Sergeant in the US army who served as his battalions main point person for helping to prevent sexual assaults, pleaded guilty to running a prostitution ring out of Fort Hood and pimping out female subordinates to higher ranking officers at sex parties. You know, this story we, is something similar, as you mentioned, to one we covered in the Navy a couple of years ago.

Mike Papantonio: Well, I mean, aren’t there organizations that come into dysfunctional organizations? I mean, they’re, this is what they do. They’re companies that come in, they look at leadership, they look at policy, they actually even go, go about doing testing on the people that are supposed to be in charge to find out whether there’s some flaws. There, there are companies that do that. And it seems like, it seems like Fort Hood is long overdue for somebody like that coming and saying, you know, this is a disaster. It’s, it’s, it’s, it’s not something you’re going to correct with the leadership you have. What’s your take?

Brigida Santos: Yeah, and even.

Mike Papantonio: Sexual assault, for example, I mean, it’s a major problem in the military.

Brigida Santos: It’s a huge problem. And in fact, a grassroots group of female troops and veterans have petitioned Congress to shut down Fort Hood and fire it’s chain of command because they’re not doing what they’re supposed to be doing. They’re not asking for this only because of how they handled the case of Vanessa Guillen, but also due to the militaries culture of sexual assault and sexual harassment. The petition has already received nearly 1 million signatures and the current and former female service members are seeking justice for Guillen and up for all the military women before her who have been murdered and raped with impunity. They’ve actually scheduled a March for this Thursday, July 30th in Washington, DC to honor Vanessa Guillen, and raise awareness about what they refer to as the military’s me-too moment.

Mike Papantonio: Well, the good news is, as I say, there are people that go into corporations and fix these problems. They could do that here too. I don’t know why somebody won’t just go ahead and pull the trigger and get that done, but thanks for joining Brigida. Okay.