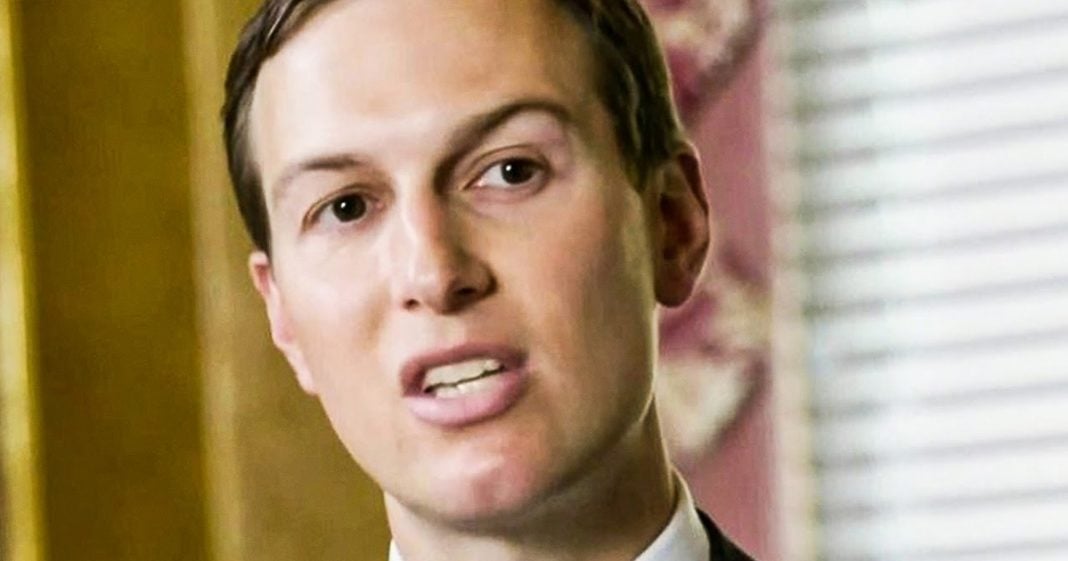 According to a new report, Jared Kushner intentionally made the Coronavirus Task Force NOT lay out a national strategy for defeating the pandemic because, at the time, the virus was only really hitting blue states and he thought that it would hurt Democrats, politically. People died because of Jared’s decision, and he needs to be held accountable for his disgusting and deadly actions. Ring of Fire’s Farron Cousins discusses this.

According to a new report by vanity fair this week, uh, back in the day, a couple months ago, when Jared Kushner was running his little shadow coronavirus task force, uh, to deal with the pandemic, there was a plan to unroll and basically formulate, and then on role, a national response to the virus, a national set of standards that everyone in every state was going to follow to help us get ahead of the pandemic and to help us slow the spread. But Jared Kushner decided he didn’t want to do that. According to this report from vanity fair. Instead, Jared Kushner said, well, this thing’s really only affecting blue States. So how about we don’t roll out national standards? Let every state kind of go it alone because it’s only the blue States. Then the voters are going to blame the governor, the democratic governor of that state.

And then it’s going to cost them electorally who’s with me. And apparently the answer to who’s with me, which I don’t know if he actually said that was everybody because that was ultimately what they ended up doing. And it wasn’t until a week or two ago where it was pointed out to Trump using maps that now the virus is infecting red States, even harder than the blue States that he changed his tone for a day, uh, and actually started acting like this thing is serious. He started being seen wearing a mask, but only because it was now affecting Republicans in the early days of this Jared Kushner and everybody working with his little shadow taskforce was more than happy to let people die. As long as they died in a state being run by a Democrat and folks, Jared Kushner should be in prison. This is negligent homicide.

That is what Jared Kushner. If this report is accurate, should be arrested for and convicted of negligent homicide, he knowingly made that decision because he thought it would personally benefit Republicans, including himself that’s criminal. This man needs to be in prison, but here’s, what’s really interesting, right? At the time the blue States being affected actually happened to be the ones where Jared Kushner owns a lot of buildings, uh, actually happened to be the, uh, democratic cities and States where, where his business runs out of where all of his friends are, where he will eventually return back to after leaving Washington, DC. Unless of course he goes to prison. So this kid is jackass, okay, is going to have to go back to New York and see firsthand the destruction that he helped. He’s going to want to go to those little high brow parties and mingle with the stars and you know, new York’s elite.

And they’re going to cast them out as they should. Not that I care for New York elite or any elite for that matter, but I want to see Jared Kushner fail. I feel like this is almost personal now. Like my, my, my, my hatred of this man, I cannot stress enough how much I think he needs to be in jail. I would love nothing more than to see Jared Kushner charged with negligent homicide, essentially murder, because that is what he did. He made this decision. He knew what the outcome would be, but he did it because he felt it was politically expedient for him.

There have to be investigations. There has to be some kind of come up and there has to be some kind of justice in this scenario. This man cannot cannot get away with this. He absolutely cannot. And him being, you know, shunned by the wealthy elite of New York is not good enough. He needs to lose everything. He needs to lose his money. He needs to lose his status. He needs to lose his freedom and spend a couple of decades in prison so that he understands the severity of what he did. If he gets off, he’s going to do bad things. The rest of his life, he’s already been accused of doing some pretty, pretty shoddy things as a real estate investor and developer, some pretty horrible things as a landlord, but nothing rises to this level. And that’s what we see. That’s what we see in criminal behavior.

It never starts out with the big grand crime typically starts off small, but you get away with it, just get away with that. So, so you go a little higher, a little higher, a little higher, a little higher until you get to this point. At the very least, this is manslaughter at the very least. And Jared Kushner. If this report is accurate is 100% guilty of it. An investigation has to be launched to determine whether or not this actually happened. This report needs to be vetted by Congress, by federal investigators, by any investigative body out there. Because we need to know if this is what happened. If not, then I apologize for all the horrible things I just said about you, Jared, it doesn’t change what you’ve done in the past, but if this is true, we need to move forward with charging this man with manslaughter, negligent, homicide, whatever it is, but this kind of thing can not just be swept under the rug. This is criminal behavior and Kushner needs to be held accountable in the U S justice system for what he’s done.