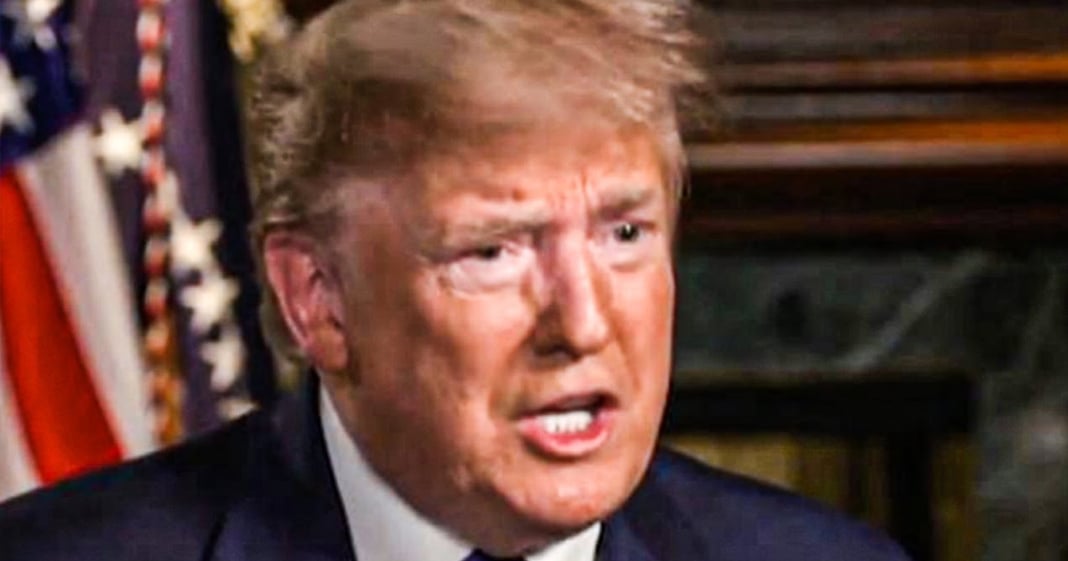 According to a new report this week, Donald Trump only began taking the pandemic seriously when aides pointed out – using actual maps – that Republican voters in Red States were starting to get the virus and die, which would hurt his reelection chances. Once they convinced him that “our people” were getting hit, he decided to start taking things a little bit more seriously. Ring of Fire’s Farron Cousins explains what’s happening.

Since the early days of the pandemic, it’s been very clear that Donald Trump is not taking this thing. Seriously. Certainly not publicly. Uh, but over the past few weeks here, we have seen a bit of a shift. Now it does still appear that the man is not taking this thing as seriously as it should be taken. He has changed his tune a little bit and he’s changed his actions. Uh, we have been able to see him now actually wearing a face mask in public. That was something he swore he would never do. Didn’t want to give the press the satisfaction they had said, but he’s doing it now. And he’s encouraging others to wear masks. The question is what changed aside from his poll numbers going even lower? Well, what changed was that his aides spent weeks not just whispering in his ear, essentially screaming at him that you have to take this thing seriously. And when those pleas didn’t work, they added a little clause to that. You have to take this thing seriously because it’s now affecting

Our people, our people, Our people, of course, being Republicans. That’s what his aides suddenly started to scream about. And that apparently is the thing. According to a new report from the Washington post this week that got Donald Trump to finally start taking this pandemic a little bit. Seriously. Let me read this passage from this article in the past couple of weeks, senior advisors began presenting Trump with maps and data showing spikes in coronavirus cases, among our people in Republican States, a senior administration official said they also shared projections. Predicting the virus surges could soon hit politically important States in the Midwest, including Michigan, Minnesota, and Wisconsin, according to this white house official. So the death and destruction that we had seen and New York and California and other Northwest States, Southern Northeast States, you know, the Eastern seaboard that it was okay for Trump. He didn’t care about that. But as soon as that virus started hitting us down here in the South and Georgia, Alabama, Mississippi, Louisiana, Texas, and Florida, of course, as soon as those numbers started spiking, they pulled out the map.

Showed him areas of see this right here. This is a Republican spa. This is the villages down in Florida, right? They’re dying from the virus. They’re dying and you can’t win without them. Oh, over here in Texas, this group, you can’t win without them. And they’re dying. I don’t know. I don’t know if the aides did this because they had to try anything to get them to take it serious, or if did it because they want him to win reelection. And that is the only reason. And yeah, believe it or not folks, it does make a big difference between a a which reasoning they had. Because if they’re doing it to save their own political lives, then they can go straight to hell. But if they did it because they had to throw everything at the wall to see if they could get him to be serious about it, then good job. But there is a world of difference between those two things. But this shows you what the president is all about. It doesn’t matter. He didn’t care that people were dying. He still doesn’t care that people are dying. You’re saying I’m not going to give New York any money because new York’s mean to me.

So to hell with you, that’s what we’re dealing with with president man-child here. This man is petty. This man is disgusting. And this man is perfectly fine with letting American citizens die until of course it starts to affect his reelection chances, this kind of report. This is the kind of thing that the DNC needs to be highlighting all over the place. This is the kind of thing that Joe Biden needs to put together. A little video about in his basement, send that out to the world. This is the kind of thing that the people need to know about. They need to understand why Trump is the way he is and the reason he does things, because it is never, it is never because of his altruism that doesn’t exist within him. Every single thing this man does is to save himself, to protect himself or to enrich himself. And that is exactly why over the past few weeks, just as the virus started hitting Republicans, that’s why this man finally started to take it at least a little bit more seriously than he had been.