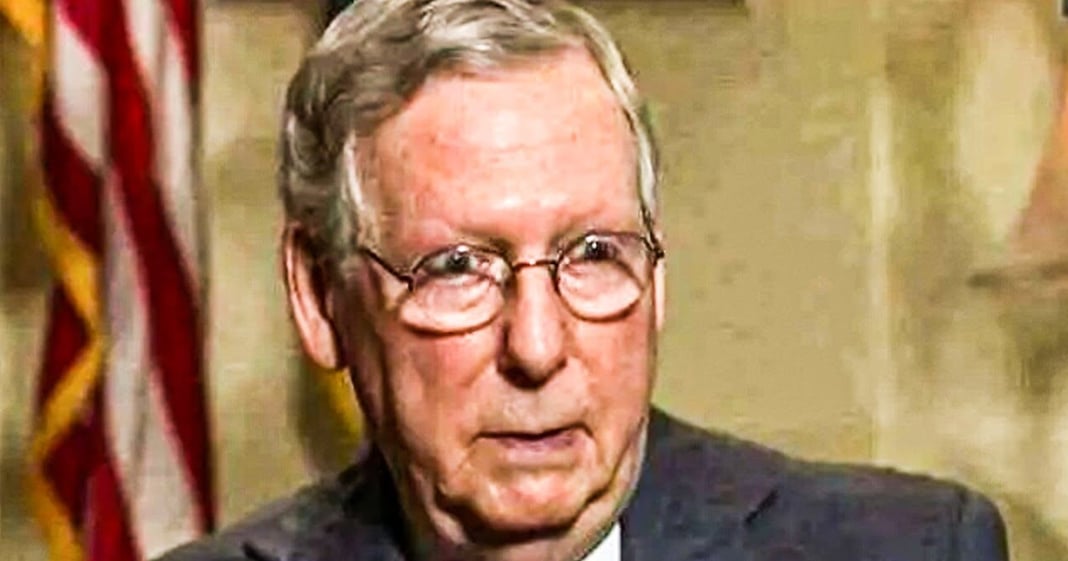 Over the past few weeks, Mitch McConnell has repeatedly reminded America that he is the worst Republican in Washington, D.C. and possibly in this entire country. And the reason he is the worst is because he is so effective at hurting American citizens. The Senator from Kentucky has blocked any additional election security funding for the year, and he’s also the gatekeeper who has allowed the extra unemployment payments to cease. Ring of Fire’s Farron Cousins explains why McConnell poses the greatest threat to the country above all other Republicans.

I know it’s easy to think that Donald Trump is by far just the worst possible person in the United States. Uh, and certainly the worst possible politician in the United States in terms of all the horrible things that he has done, but it is important to remember that most of what Donald Trump has done, the, the really bad, awful stuff that’s going to affect us for generations. He couldn’t have done any of that without the help of Mitch McConnell. I think the most glaring example is obviously the judiciary, uh, which Mitch McConnell, uh, with the help of the Federalist society, even though the Federalist society denies it, there is plenty of evidence that their fingerprints are all over it, uh, keeps feeding Donald Trump, all of these right wing judges, very young. A lot of them, uh, actually rated unqualified by the American bar association. Some of them have never even tried an actual case in court and they’re federal judges now for the rest of their lives and they’re younger than me.

And I’d like to think I’m still relatively young, but that’s just one of the many ways in which Mitch McConnell is just the absolute worst. Last week, Mitch McConnell put forth a deal, I guess you would call it for a new round of a stimulus to help the U S economy, uh, through the pandemic. And as part of it, he is included for the Democrats, a whopping $0 million in election security funding because, Hey, that’s just the kind of guy Mitch McConnell is. He wanted to make sure that he included in this package $0 million. And of course, Republican say, maybe that’ll change. We’ll see what happens with negotiations with Democrats. But Democrats have also made it clear that they’re not taking anything off the table, good or bad, including immunity for corporations. So we already know are Democrats are coming at this from a position of, we’ll give you whatever we want or you want, excuse me.

So who knows if we’ll get election security funding and this entails so many things, it’s not just because of the pandemic. It’s not making sure that people can vote by mail McConnell doesn’t want that. Cause that could mean the end of his career. A lot of Republicans think the same, Donald Trump admitted it. Not that long ago. It also includes we’re not going to provide polling places with any means to make sure they’re not spreading the virus to everybody that comes in there to vote. And it also means we’re not going to do anything about our election cybersecurity to make sure that nobody from a foreign adversary to the hacker down the street can access our results and change them by getting into our systems. That’s Mitch McConnell. That is the most recent example of why he is one of the most horrible, if not the most horrible person serving in Washington DC today.

Oh, and by the way, just a couple of days before he did that, you know what else he did? Uh, he refused to extend the increased unemployment for people who’d lost their jobs during the pandemic that was 600 bucks a week. It was helping people stay afloat. At uncertain times, these people desperately needed that. And Mitch McConnell said, Nope, we can’t make it. Uh, and this is actually, there were a whole, a whole Republican talking point. They’re saying we can’t make it more lucrative for people to stay home than it is for them to go back to work. Now that forgetting for a second, that that’s actually on the corporations, right? It’s not the fault of the people that being on unemployment right now pays them more than their crappy job. That’s on their employer. You want people to come back, give them a reason to come back.

Not just because, Hey, you have to, we have to feed this capitalistic beast that we’ve created because we refuse to tame the beast. Now God forbid we do that. And that’s just another reason why I mentioned McDonald’s the worst, but folks there’s hope Mitch McConnell could lose. Unfortunately, the democratic party decided to back a pro Trump Democrat against Mitch McConnell, Amy McGrath. This is Alison Lonergan Grimes all over again. You put up the weakest possible people, and then you put your hands on your head like, Oh my God, how did they lose? Everybody hates Mitch McConnell. We thought we’d put up a milk toast person. Who’d be no different than him. Just a different party. Well, there’s your answer. There’s your answer. But the democratic party doesn’t ever learn from their mistakes. Republicans don’t either. But so far, some of these Republicans like Mitch McConnell, I’ve never had to answer for their mistakes.

Let’s not forget for a second that Mitch McConnell’s wife is under investigation for steering transportation contracts, to Mitch McConnell’s donors back in his home state of Kentucky too. So there’s that as well, the list could go on and on and on. But I think a lot of the anger people are feeling in the public right now. That’s being directed at Trump. Some of it needs to be redirected towards Mitch McConnell because when you look at what who’s done, what, and who’s done, what for longer Mitch McConnell is far worse than Donald Trump could ever hope to be.