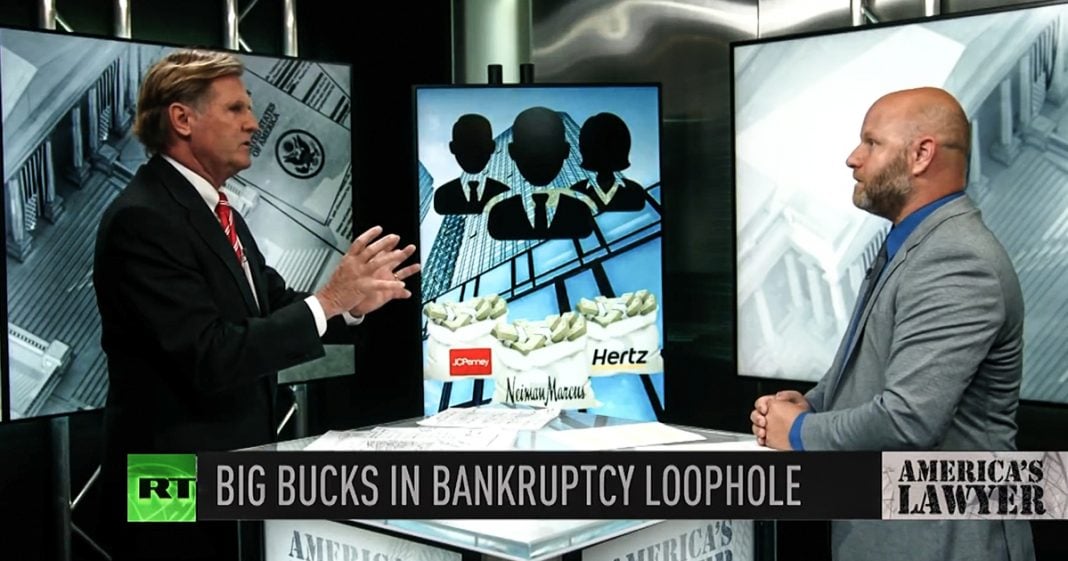 Mike Papantonio: Major corporations are filing bankruptcy to avoid COVID losses, but not before handing their CEOs massive bonuses. Wow. What an ugly, disgusting story. Now this, this takes me back to 2008, right? Where we didn’t prosecute anybody. We let these banksters these thugs, these, these absolute sociopaths, steal gazillions of dollars. Eric Holder, who was the attorney general refused to prosecute them. The, the, that administration Obama comes in and saying, we have to do something about these corrupt bankers. Remember that?

Mike Papantonio: He ran on that and nobody’s prosecuted. As a matter of fact, nobody was even thoroughly investigated. Jamie Dimon comes out looking like a hero. Isn’t this a repeat of that where the COVID case is concerned?

Farron Cousins: Well, absolutely, because at that same time back in 07 and 08, you had these executives with their tails between their legs, walking into Congress, begging for money. We, we’ve screwed up. Everything is horrible, but we’re too big to fail. Give us money. They essentially made the same argument when they were lobbying for these COVID bailouts, which they got far more than anybody else. And so now we’re finding out that even though they got the money, they still decided let’s file for bankruptcy protection. But according to bankruptcy law, if you file for bankruptcy protection, you can’t issue bonuses. So they said, well, we’re going to file for bankruptcy. But first CEO, here’s $5 million. Here’s your bonus. Now we file for bankruptcy and lay off everybody.

Mike Papantonio: Okay. The bankruptcy judge can do something about this if, if they want to.

Mike Papantonio: They can say it was fraudulent. You’ve got situations where you got companies this was called high crush, inc. It was a supplier of sand for oil and gas fracking. They, they give this bonus to these folks like two days, big bonuses, big bonuses. The CEO’s not the people actually work out there, but they give these big bonuses two days before they declared bankruptcy. JC Penney did the same thing, $10 million worth of bonuses.

Farron Cousins: And 80,000 people lost their jobs with JC Penney.

Mike Papantonio: Yes, yes. Whiting petroleum, $14 million. Chesapeake energy, $25 million. So they’re spreading all of these bonuses around. Now in bankruptcy, there is something called preference and that is, if you move money away from what should be a bankrupt fund, then you can pull that bank back in. But the laws, the laws give these CEOs a lot of wiggle room.

Farron Cousins: Well, they do and one of the things that Obama did do, and actually, no, this was back in 05 they did it, this was under the Bush administration, is they put in a loophole that said, you can only give a retention bonus because that’s what they like to call these at the end of the year. You did such a good job, we’re giving you $25 million, so you don’t leave us. So they changed the law and said, well, you can’t do a retention bonus unless of course you have an offer from another company. And then it’s okay. That is how for a long time, they were getting around a lot of these loophole or a lot of these, these bonus laws. And that’s an important part of it too, because they realized by doing these little tricks, by working with other companies and saying, we need you to act interested in our CEO. We need you to reach out and make a pathetic offer to one of our people that you have no intention of doing so we can legally. We’ll do it for you. You do it for us. It’s the same kind of criminal activity.

Mike Papantonio: The feds are not giving this money in comparative. They’re not giving this money to people who can’t pay their rent. They can’t buy food for their family. They’re losing their homes. And we forget don’t we, that in the bailout that took place in 2008, the bankrupt, the, the bankrupt folks were saying, well, you know what we’re going to do. We’re going to, we’re if you’ll give us this money, we’re not going to foreclose on people.

Mike Papantonio: You know, so this whole story, this is a continue, these two stories fit together.

Mike Papantonio: So let’s, let’s deal with them together. And the point is we can’t really draw any distinctions between what happened in 2008 and what’s happening right now. It’s all going to the top, isn’t it?

Farron Cousins: Right, it is. And we’re seeing another bailout in the works right now, another stimulus package. It may once again have some checks for average people, but most of the relief, most of this bailout, billions of dollars straight to these companies, these same 40 companies that have already filed for bankruptcy. And it’s not because they’re actually going out of business. It’s not because they’re disappearing. It’s because they don’t want to be on the hook for those losses for their debts and to the workers.

Mike Papantonio: What is, what is the fear of perp walking some of these folks, when we know they’re not just on the edge of the law, some of them have broken the law. I think I can’t get away from the HSBC case where we knew that they were actually involved in, in washing money for terrorists. Okay. They admitted it. They signed a document. Yes, we washed money for terrorists. Yes, we know it killed, killed soldiers. We know that. Yes, here are the names. Here’s where we got the money. It was very specific. And Eric Holder, honest to God said, oh, it’s okay. We’re going to fine you $1.6 billion and they went on their way. Nobody was perp walked. Nobody went to prison. How do you stop this kind of conduct until you say, yeah, they don’t look like a criminal, but we need to perp walk them. What, what do you do?

Farron Cousins: Right. The reason they like to go for the fine route instead of the jail route is because the DOJ, if they fine somebody and they get $10 billion off it, they get to keep a large part of it. That becomes their fund money. They get to play with that. They get to use it for their personal budget and go do whatever they want with it.

Mike Papantonio: You want to hear the real zinger, that $10 billion is actually taxpayers end up paying it.

Mike Papantonio: Because they use that as a write off that taxpayers have to pay. So I don’t, you know, it’s not Republican, it’s not Democrat. It’s, it’s, there is no courage at the DOJ, there never has been. And as long as we allow these, these corporate thugs to continue what they’re doing, this story that we just, that we lead with about these bonuses, about how they’re packing bonuses and then getting out of town. This is just, this is just the beginning, but you watch, we will see little or no involvement by the department of justice when it comes to actually prosecuting in this country.

Farron Cousins: Right. Even if we get a new DOJ six months from now, none of this will be prosecuted ever.

Mike Papantonio: Yeah. So as I’m looking at this, I guess as I round up on it, you, you have to kind of, you know, you have to kind of say, look at history, which is the 2008 burndown, and you’re going to get a picture of exactly what’s happening in 2020. All the powers at the top, all the money goes to these CEOs, all of the workers who, by the way, production and output has been at an all time high. While it’s been an all, all time high, wages have continued to drop. You’ve got people in this pandemic, they’re losing their homes. They can’t feed their family. And we have this kind of thing going on and the DOJ sits back and says, eh, it’s just the way we do business.

Farron Cousins: Well, you know, the reason the economy’s even failing right now is not because these big corporations can’t have people coming into the office. It’s because the people at the bottom who actually drive the economy don’t have money because they can’t go into work. If these people had money, if the government had taken care of them the way the other countries did.

Mike Papantonio: The way they were supposed to.

Mike Papantonio: Empower the bottom economy wise, not the top. We’ve proven that doesn’t work. Farron Cousins, thank you for joining me. Okay.