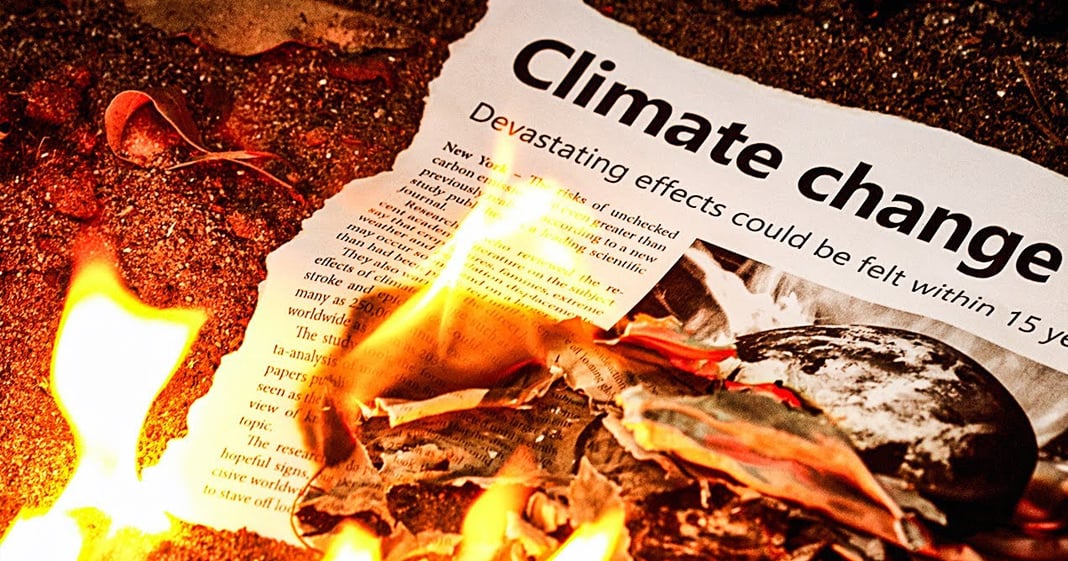 A new study has found that climate change deniers are getting far more coverage on the news than supporters of climate change and scientists. This helps explain why the United States seems to have such a hard time accepting science. We are allowing the corporate overlords in the media to skew the coverage in a way that casts doubt on a scientific issue where there is NO doubt. Ring of Fire’s Farron Cousins explains what’s happening.

The other 10% of press releases about the issue are coming from industry funded front groups, and sometimes from the industries themselves. And yet, somehow, even though it’s a 90 to 10 ratio, these industry funded ones are getting more views in these major newspapers, which are the ones Brown university looked at wall street journal, New York times and USA today. Obviously the wall street journal has a very, a right word tilt New York times and USA today. A little more, even keel, little more down the middle, but even they are falling into this trap. And the reason is very simple folks. We don’t have to pull out our magic eight balls. We don’t have to, you know, get a psychic in here to tell us what’s happening. We know why this is happening. The answer is money. That is the same reason that these major networks do not cover the issue of climate change in any kind of meaningful way.

How do we know that? Well, we know at one, because Chris Hayes accidentally admitted that on Twitter a year or two ago, whatever it was, where he said, yeah, they don’t, you know, we don’t really get to cover climate change because you know, it’s a snooze Fest for the viewers and a snooze Fest for the viewers that wasn’t the exact phrase he used, by the way, a snooze Fest for the viewers means people tune out people tuning out mean you can’t sell as many ads for as high a price. So they have to go to the sensationalistic news. That’s not as you know, interesting or important as climate change itself. And I’m going to be honest. So I’m going to call out unfortunately, uh, progressive media too, with the exception of probably Tom Hartman, who, who covers the issue of climate change more than anybody else in progressive media look through other people’s YouTube channels.

How many times are they talking about climate change? If you’re a progressive and you’re not talking about this very important issue, then you’re failing your audience. I know David Pakman does. He is also big into science. I haven’t seen, uh, how much he’s doing it recently, but we need to get better on this. Even we here at ring of fire the last year or so, I’m covering climate change, you know, 10%, as much as I used to be used to do it constantly, hell, I used to be an environmental writer. That’s why this is, you know, one of my issues. But when we look at these studies, when we see how skewed the corporate media is on this issue, that means it falls on us. And we’re all failing again, except for Tom. Tom is doing great. We need to emulate what he is doing, but the rest of us have to get better at it.

Not just in covering it. And yeah, it doesn’t get as many views. That’s what happens, but, Oh, well this is too important to just ignore because we’re not going to get a hundred thousand views on it. We have to cover it and we have to cover it in the way that climate scientists are telling us to cover it. You know, go look at dr. Katharine. Hayhoe, uh, dr. Michael Mann telling people take it seriously, do not be alarmist though. Don’t use that alarm as language, give people hope, tell them that there is time. And that’s what I’ve been trying to do because I actually got scolded by them. And so I’m trying to do the right thing. And that was a couple years ago. I got scolded, but, uh, ever since then, I’ve listened to them. I’ve I’ve done what they’ve they’ve said we should do, because I’m trying to do my part here. Cause we know in another study this week proved it. The corporate media is never going to do their part. So it does fall on us. We are the, the, the, the messengers at this point, and that’s a big burden to bear, but I think all of progressive media should be flattered that we get to bear it on such an important issue.