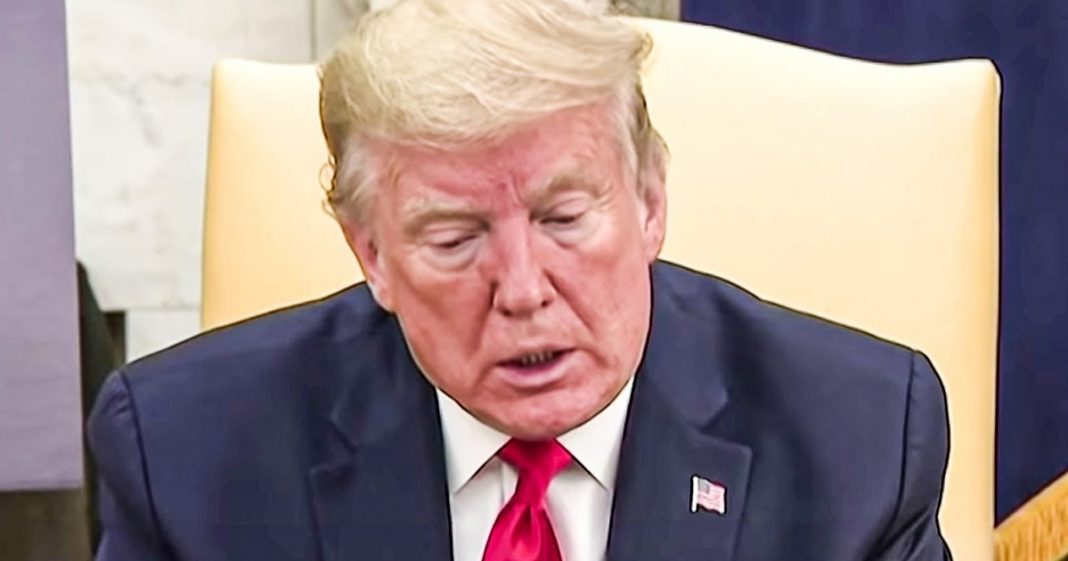 The US economy shrank faster than it has ever shrunk in the 2nd quarter of this year, nearly all of that due to the coronavirus outbreak. But our economy was already weak to begin with, as Ring of Fire’s Farron Cousins has explained repeatedly. If we do not build an economy with the working class as its foundation and most nourished part, then the economy can never be stable and will be subject to whatever bad news the day has to offer.

Yesterday, the news came out that the us economy shrank at nearly 33% for the second quarter of this year, making this the worst, second quarter in the history of the United States economy, to put that another way, Donald Trump just gave the U S economy, the worst three months span that it has ever had ever, ever. We have never had a three month span where the U S economy shrank 33%. And of course, most of this has to do with the pandemic. Uh, that is what put us on this downward spiral. That is what is causing the economy to shrink. That is why 40 plus million people have lost their jobs. And that is why everything is essentially going to hell right now. But seeing those numbers in real time, it sent the market spiraling down. Economists are now predict, predicting a very slow recovery period, which means we’re kind of stuck like this for quite some time.

Now, um, slow recovery. They don’t really give you a timetable on what that means. You know, slow for them could be six months could be two years, but here’s the problem folks. And this is one that we have been shouting from the rooftops for two straight years, you know, back in the early days of this administration, the first year or two, when we kept getting all those wonderful economic numbers, got all those wonderful economic numbers for the last, you know, seven years of the Obama administration as well. And we were talking about this then too, you have to look at what those numbers really are, because if you had been paying attention, if you had actually been reading the jobs reports, you would have known that this economy was never strong. It was never strong. We never actually had a real recovery, not even just since the crash of the Bush years. We haven’t had a strong economy truly since the 1970s folks. And I know that sounds weird to say, because you say, well, we’ve had plenty of ties of, of phenomenal growth, uh, millions of jobs created. So how can you sit there and tell me the economy hasn’t been strong? Because it depends on what you described as a strong economy. Do you think a strong middle class with people able to go out there and afford rent and food and

Pharmaceuticals? Uh, Shouldn’t that be the indicator? I don’t care how many more billions of billionaire makes during a pandemic. That’s not an indicator of a strong economy. I don’t give a damn what the stock market does. I don’t care if it just had its best day on record. That’s not an indicator of the economy at all. We have to stop treating it as such, but that is what we have been told for decades now that Oh, if the stock market does well, the economy’s doing great. Really? When we have more empty houses in this country, then we have people living on the streets. I don’t think that’s us. I don’t think that’s a strong economy. I think we could solve that problem real quick. If we just put our heads together, what could we do with these empty houses and a person on the street? Huh?

Oh, Most people can’t afford their prescription drugs. Oh, well the stock market’s doing great. So the economy must be good. Oh, wages have been stagnant since 1973, but productivity has gone up. Yeah. But look at the, how much money their CEO made. So I guess the economy strong. Do you see what I’m saying? Everything I’ve said now is true. And everything I’ve been telling you for two years has come to fruition. I have been saying repeatedly, sometimes very loudly that the United States economy was one pin prick away from collapsing. One small breeze away, I think is actually how I described it because I use my three little pigs analogy rather than being the little pig of a country that made its economy out of bricks. And those bricks were, would be these strong, middle-class holding this economy together. We didn’t do that. We made our economy out of straw and you know what?

The straw is millionaires and billionaires. That’s who we base our economy on, you know, a tiny sliver of people in this country. They’re not the people who drive the economy. They’re not the people who are going out there and spending all the money. Most middle-class people are unable to save any money because because of their situation, they have to spend 100% of their paycheck. Every time they get a paycheck, that’s why we call it living paycheck to paycheck because there’s nothing left over, but they’re spending a hundred percent. And that spending is what drives this economy. Not some billionaire like Jeff Bezos, hoarding, hundreds of billions off shore that doesn’t drive the economy.

You know, we have to, we have to, if we want to avoid such a fragile little economy that goes to hell every time there’s a crisis, we have to put money in the hands of people. Yeah. Folks, it really is that simple. It, honest to God is that fricking simple put money in the hands of people, make sure the middle class is strong. Make sure the working class is strong. Make sure you’re protecting the lower classes. If you do that, you will have a strong, robust economy. And guess what? You can get rich in an economy like that. You can still be rich. Even if you pay your employees higher than median wages, you can take care of them and still have plenty of money left over for a new private jet. But somewhere the way we let the corporate ruling elite think that they didn’t have to do the first part of it.

You don’t have to take care of the workers. How about you just go instead and buy yourself a second jet. We know you can only be on one at a time, but wouldn’t it be nice to have a backup? Don’t you think you need that second yacht. Betsy Davos, our secretary of education has multiple yachts, multiple yachts. The woman in charge of education here in the United States. She’s a piece of straw trying to hold this economy together, doing absolutely nothing functional to hold this economy together. But we have been conditioned to think that a straw economy is much better than one made out of bricks based on the middle-class. It never, ever will be economic numbers. Like this would not have happened. Certainly not to this degree. If working class people had been protected. If they had money, if they had the means to take care of themselves, if they had had enough money to put money in savings, these kinds of things make all the difference in the world.

When we’re dealing with a crisis like we have right now, shutting down the economy for a month or two completely shutting down. Wouldn’t have been as big of a deal if people had enough cash to keep pushing forward through that time. And if we had gone to a complete shutdown, instead of trying to rush things, cause we got to get people back to work because they don’t have any money. And then boom, the thing blows up again. If we had taken care of them in the first place, we wouldn’t have rushed back. We wouldn’t have dragged our feet with shutting it down. We would have had a handle on this thing and we’d be talking about other issues today, but instead, because of how we’ve built our economy, because of what our capitalistic system truly is, we’re going to be talking about this pandemic. We’re going to be talking about the economic damage from it for an exceptionally long time. We could have had a great robust economy. We truly could have been a superpower in this world, but doing so means we would have had to take care of the middle class. And that’s just not something that our corporate leaders are willing to do anymore.