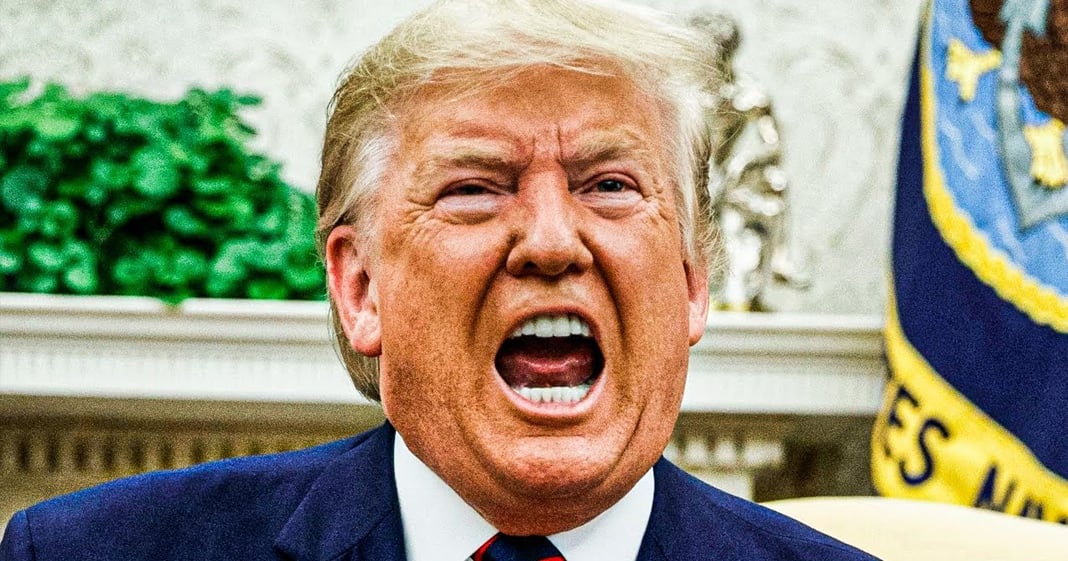 Donald Trump is losing his grip on his administration, his campaign for reelection, and reality at this point, and his staffers in Washington have just about had enough. They realize now that they can’t keep him on message and that he’s going to do whatever kind of weird stuff he wants to do, and they’ve just decided to accept it. But the problem is that if there is no one to tell him to knock it off, he’s likely to dig his hole even deeper, as Ring of Fire’s Farron Cousins explains.

You know, for a few months there, believe it or not, Donald Trump’s staff inside the white house actually thought that they had reigned him in and they thought this because in the early days of the pandemic, as we all know, Donald Trump was doing those daily press briefings, going out there saying ridiculous things, making absurd and outlandish claims that, uh, eventually ended up cratering his approval rating, uh, both overall and with regard to his handling of the virus. Cause let’s not forget. In the early days of this before he started doing those press briefings. Majority of people in this country actually approved of how he was handling the pandemic. They approved of how he was handling the economy. Those numbers quickly went South. Once everybody saw the president speaking every single day, realizing that this man has no idea what he’s doing. So his staffers were able to convince him to stop doing it.

Now that didn’t save his poll numbers, they continued to go down because the man continued to be incompetent. That’s not something you can turn around, but staffers thought for a moment, they at least had a handle on the thing. And then last week, seemingly out of nowhere, Donald Trump comes back, starts doing his daily press briefings again. And as the staffers put it all hell broke loose because now instead of getting to talk about the issues, they have to talk about things like why did the president wish Maxwell? Well, why did he say that he hopes she’s doing okay? Why is he out there promoting this doctor? Who’s talking about alien DNA and demon seed. And now we have to talk about that. We have to somehow justify or rationalize this because the president has officially gone off the deep end. Now, according to the staffers, the reason Trump came back and started doing these daily press briefings again was because he wanted to quote control the agenda.

Okay. That makes sense. It actually does because the agenda, the talking points, the overall handling of everything had in fact gotten away from him. Media was crafting the narratives. Joe Biden’s campaign was crafting the narrative, uh, groups like the Lincoln project were crafting the narrative. Trump was playing from behind and he doesn’t ever like to be in that position. Uh, politically speaking, nobody would want to be in that position. So he thought he could come back out. He could, you know, set the agenda. People would follow him, go where he wanted them to go. And nothing even close to that ever happened again because he goes out there and he says these crazy and ridiculous things. He didn’t need to wish just laying Maxwell. Well, he didn’t have to say anything positive about her at all. Uh, what she is accused of doing is absolutely horrendous.

What Jeffrey Epstein did, what we know that he did. You know, that’s not speculation that is horrendous as well. You don’t need to acknowledge that because as soon as he did all these photographs of Trump and Maxwell, everybody started tweeting them out. Everybody started posting them on social media. You know, that’s, that’s, that’s something that your staffers have to deal with because they also have to control an agenda. And that agenda is not just saving your job, but saving their own. Cause that’s the thing that these people working inside the white house realize if Trump loses his job in November. So do they, they have nothing because as we have seen too many times throughout this administration, it’s actually fairly difficult, uh, for these former Trump staffers at any level to find another job, you know, the chaos that has been the hallmark of this administration is not exactly something that a future employer looks highly upon. You know, they’re not going to see that and say, Oh wow, you worked for a presidential administration. That’s great. Which one? Oh, that one. Okay. You know what? We’ll call you if something opens up. Thanks. Thank you. Thank you for coming in. That’s how that job interview is going to go. This is not something to brag about. This is not something that’s going to make your resume pop.

Instead, It’s going to turn people off. And so that’s why these staffers are so frustrated right now. This is it. This is the gig. If they want to continue working in politics, not only do they have to make sure that Donald Trump keeps his job after this election, but they have to try to turn it around. They have to make this look good for them so that they are actually employable in the future every now and then, you know, you do feel a twinge of sympathy for these people. They’re doing what they can, right? And these are human beings, okay? They are human beings. They have families to support. You know, they have to support themselves. And right now they’re in self preservation mode and they’re getting more and more pissed off by the day at Donald Trump, who they are realizing. Now they cannot control no matter what they do, no matter how many times they try, no matter how hard they work, they can’t get this man to stay on message. They cannot for the life of them, figure out how to make him be competent because they can’t.

If you’re an incompetent person, you’re not going to suddenly understand what you’re doing or know what to do just from somebody saying, Hey, be better. This all has, you know, its roots in Donald Trump’s narcissism. That narcissism is his biggest downfall. That is what is costing him. All of this support right now. That is what is causing these massive headaches with his staffers right now, because he refuses to listen to anybody else. He refuses to acknowledge that he may not be the smartest man in the room. And that has always plagued this man. Since the moment he took office, he thought he could walk in there, thought he could do this thing. Thought everybody would bow down to him. But it turns out that being president isn’t just about leading. It’s also about listening.

You have to listen to the people smarter than you. You have to listen to the people who understand what they’re doing. Now. We’ve seen that go the other way. By the way, George W. Bush was also grossly incompetent, not a very smart man whatsoever. So he listened to all of those people around him. Unfortunately, George W. Bush surrounded himself with evil little ghouls who kept telling him, go bomb. This country, go kill these people. Let’s go start this war. And that got the United States into a quagmire that we’re still in today. So You have to kind of measure it out. And to be honest, do we actually want Trump listening to the people that he’s put in place? I mean, hell at least George W. Bush picked people who had been in government before Donald Trump picked people like Ben Carson and Betsy DeVos and Andrew Wheeler. And before that Scott Pruitt, these are not people that anyone should be listening to. These are people with either no ideas or horrible Ideas, but the staffers, Those are people who’ve been in DC.

They’ve worked at think tanks. They have worked for nonprofits. They have worked as congressional staffers. You know, they, they may be the low people on the totem pole, but they actually know what they’re doing. And they’ve seen plenty of other people pull these things off and they’ve used that knowledge and that experience. They brought it to this white house and said, here is our wealth of knowledge, Donald use it and repeatedly up until this week and probably further beyond probably till the end of his administration. Donald Trump has repeatedly Said, thanks, but no, thanks. In fact, I’m willing to bet he wasn’t even that polite about it. But as long as he continues to ignore the advice of people who know better than him, he is going to continue to always be his own worst enemy.