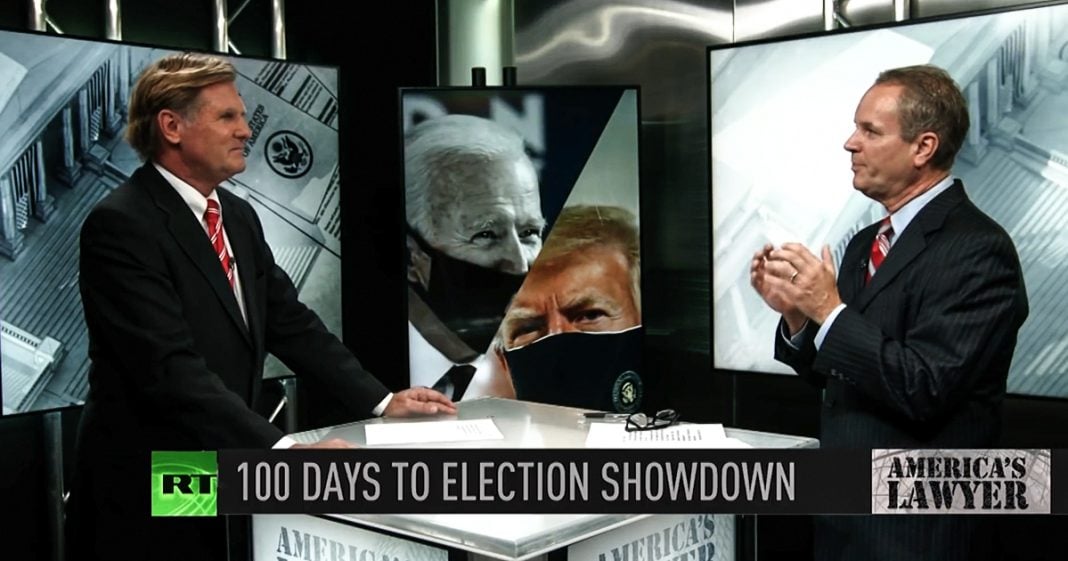 Mike Papantonio: Both the coronavirus pandemic as well as wild protests raging throughout the country, while a clock is ticking down in this presidential race, make things very interesting. I’ve got David Lamb with me specialist in this area, has been following elections for a long time. Look, first of all, I don’t know. I don’t know how Trump pulls out of this.

Mike Papantonio: I mean, the numbers, the numbers are startling. You know, I guess, I think you told me earlier that there was one such, such, one situation where it was what was HW Bush running against, Dukakis.

Mike Papantonio: And the numbers looked just like this.

Mike Papantonio: But then Dukakis put that ridiculous helmet on, right? Remember him putting the tank helmet on his head.

Mike Papantonio: And of course, HW Bush won. I’m not seeing that here. I got to ask you something, you know, I’ve always had a theory that they would play the fear card.

Mike Papantonio: And they are playing the fear card in a big way. You know, you’ve got the ad where Biden wants to do away with police departments where, you know, there’s mass pandemonium in the streets. And that obviously worked for Nixon.

Mike Papantonio: Because Nixon was running against the guy where that was going on.

David Lamb: He was the outsider.

Mike Papantonio: He was the outsider.

David Lamb: Well, you’ll, you’ll notice, so Trump has tried several things to try to pin things on Biden, or try to find where there’s a foothold. He has now settled on, he is the law and order candidate. Okay. So that is who he is sending in these, these federal troops to Portland. That kind of goes along with that. It, it’s a hope, but the challenge there, Pap, is like you said, so he is the law and order candidate against the America that he has been in charge of for three and a half years. Right?

David Lamb: It’s, how do you pivot that?

Mike Papantonio: Right. Nixon ran on law and order, but he was the outsider coming in. Here it’s kind of tough for saying, hey, look, what’s happening in the streets. And oh, by the way, I am the president of the United States.

David Lamb: And, you know, and the Trump campaign, they actually do, do tweet and say this is what Biden’s America will look like. But the reality is this is what Trump’s America does look like. And with the groups that he’s really struggling with those suburban moms, they, they just do not like seeing all of the violence and all of the scary, that footage is everywhere.

Mike Papantonio: Well, and you gotta wonder, are they blaming, who they’re going to blame? And he’s the guy in charge, right. You know, in 19, in 2016, you know, Trump is like the master or his people are the masters of tagging people. Right?

Mike Papantonio: They, you know, what was it? Ted Cruz was lying Ted.

Mike Papantonio: Hillary was lock her up chants, you know, he’s pretty good at that. It’s dem, he’s a demagogue. Right? So I don’t know that he’s been able, he tried to give sleepy Joe, the sleepy Joe tag, you know, he won’t come out of his basement and you know, that’s true. He’s running from his basement and it seems to be working. He’s having a hard time tagging Joe Biden, isn’t he?

David Lamb: He is. And that’s a Testament to Biden partially because he, he is, he has proven difficult for Trump to pin with the radical left or to make Biden into a scary individual. And even, I don’t know if you saw this, this last week, the president trying to bring into question the vice president, the former vice president’s mental acuity and mental fitness.

David Lamb: And whenever, and this even blew up in Trump’s face, because he was pointing out how, questioning whether Biden’s got what it takes to be the leader of the free world.

Mike Papantonio: He looked like a crazy man when he was questioning. Run through, run through what happened, it was the weirdest thing I had ever seen.

David Lamb: So someone, what, what does that put that? So that’s one red flag, but then he goes into this thing. I don’t know if you’ve seen this to where he starts in the test he said, they, they ask you a person, woman, man, TV, camera. And then he goes on.

Mike Papantonio: He said, he said, I passed them all.

David Lamb: And then he said they were stunned at how good I was at that.

David Lamb: And so even when he brings up trying to find something on Biden that will stick his mental fitness, he comes across looking kind of foolish himself.

Mike Papantonio: Because he was trying to say, man, woman, television. You go, what?

David Lamb: What is happening? Yeah.

David Lamb: I don’t know that he has the, he has the campaigning prowess that it will take in the last 100 days to be president.

Mike Papantonio: You gotta have, Karl Rove. If, if Karl Rove, the turd blossom, as we talked about is in charge now and I’m not seeing anything that, that Rove, that Rove’s doing. It’s almost like Rove’s, Rove’s kind of open, yeah, I can, I hope we can squeak by. Look, less than a hundred days from the election, talk about where we are with, you know, where it comes to electoral college, which is where the, where it’s won or lost and popular vote. Popular vote right now to me doesn’t mean as much. What is, what do the electoral vote issues look like?

David Lamb: But Florida especially is crucial to president Trump, if he has any chance. And right now, you know, he, it’s nearly a double digit for him. No Republican presidential winner has won without the state of Florida. Calvin Coolidge was the last to do that in 1926.

Mike Papantonio: Yeah. I’m not seeing anything that takes hold. I, I would’ve thought the law and order would have taken hold, but your point is very well taken. This is the guy.

Mike Papantonio: You know, so that’s really not taking hold. The sleepy Joe in this cellar who is by the way, been in office for 40 plus years.

David Lamb: He has.

Mike Papantonio: And now he’s saying I’m going to do something. That’s kind of out there. It hasn’t been developed really well. But the war chest.

David Lamb: Yeah. The, their, the funding, Trump has still a great deal of money in the bank. But how are they going to utilize that? Because if you look, you were talking about electoral college votes, at this point, Biden is likely or leading. He has 222 electoral college votes kind of in the bank, if you will, in his hip pocket, 222, 270 is where he’s got to get to. Trump is at 115. How do you get to 270 from that?

David Lamb: And Texas and Florida, those are really expensive.

Mike Papantonio: Thank you for joining me. Okay.

David Lamb: You bet. Thank you.

Mike Papantonio: That’s all for tonight. Find us on Twitter and Facebook @facebook.com/rtamericaslawyer. You can watch all RT America programs on Direct TV channel 321 and also stream them live on YouTube and be sure to check out RT’s new portable app, where you can watch all of our favorite shows. And Mike Papantonio, this is America’s Lawyer, where every week we tell you the stories that corporate media is ordered not to tell because their advertisers won’t let them and because of their political contacts put so much pressure on them not to tell these stories. Have a great night.