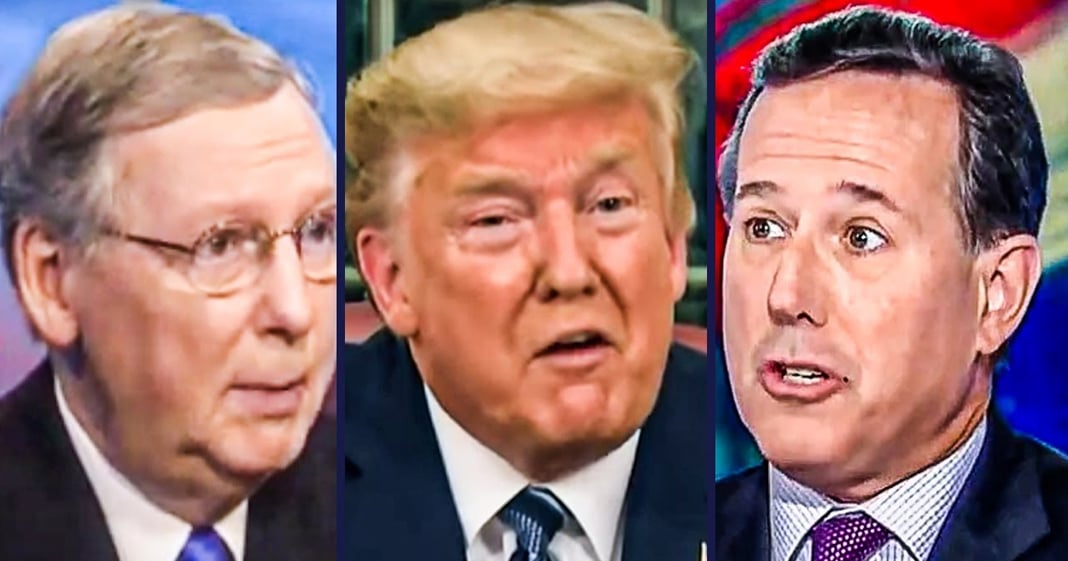 Following Trump’s statement about the possibility of postponing the election, the media was scrambling to find a Republican willing to talk about what the President said. And most of them had better things to do. Regular Republican commentators suddenly had other projects that they were working on and couldn’t be bothered, while some simply ran and hid until stronger Republicans came forward. Ring of Fire’s Farron Cousins explains what happened.

Yesterday, following Donald Trump’s tweets, suggesting that he, uh, may have to postpone the 2020 election because vote by mail, just isn’t safe. According to him, it’s clearly not safe for people to go and vote in person. So you don’t know what to do. So we may have to postpone it immediately after that, as you could imagine, the media is out there scrambling, Holy crap. We need to get some sound from Republicans, responding to what Donald Trump said. That is standard operating procedure for the media. And surprisingly, most Republicans wanted absolutely nothing to do with the president’s statement. According to reports, uh, several Republicans straight up just said, Nope, I’m not going to say anything. Uh, Rick Santorum, who is a regular contributor to CNN, a failed presidential candidate, uh, they called him asking for a statement and he said, gotta go. I’m on the golf course.

That is the exact quote that they printed from him. Got to go I’m on the golf course. So they said, okay, well, you know, Rick Santorum’s are exempt or he’s not even in office right now. What if we, what if we start asking lawmakers, let’s call Senator Joni Ernst. What does Joni Ernst have to say? Oh, well she said, uh, she’s not answering any questions. So the president essentially says, Hey, what if we dabble in a little bit of fascism here? And Senator Joni Ernst, her only response is, yeah, I’m not going to answer any questions. Okay. Well, Lindsay Graham, right? Lindsay Graham.

Heated race that he’s in, he’s losing the money battle. You know, he’s been a loyal, loyal lapdog for Donald Trump. Surely this man would have something profound to say maybe a way to kind of spin this to make Trump look good. And instead Lindsey Graham said, I don’t think it’s a particularly good idea. And then he declined to comment any further. Okay, well, you know what? Those are high profile people, maybe some of the lower people down there, people, most folks have never even heard of, unless this happens to be a representative. Maybe they would be willing to either speak out or speak up in favor of support of this. So papers reached out to people like a representative Kelly Ward from Arizona who said that she wasn’t informed because she was, uh, on Fox and friends at the moment. She didn’t know what was happening. I was on Fox and friends.

I don’t know. I don’t have to deal with this. I was on TV then. Of course, Andrew hit a representative from Wisconsin. Uh, said he refused to speak on the record. He said, I haven’t seen it. I would be happy to talk off the record. Yeah. Real brave there. Then you had representative Terry Lathan from Alabama, uh, who gave Trump a pass on the statement saying it was just a suggestion, not a demand. Uh, so there you have it. That is your brave Republican leadership in Washington. D C folks either. Oh, he misspoke or, yeah, I don’t know. That’s such a good idea, but don’t ask me anything else. Or just straight up being like, yeah. You know what? I’m playing golf. I don’t, I don’t care that the country’s burning down. I’m up, I’m on deck, whatever they say in golf. Right?

I don’t play golf. Uh, so, so that’s what happened. That’s what happened With all these, you know, brave movie, macho Republicans out there who always tell us that, dang it. We’re going to protect ourselves. We’re going to be the big, tough burly men of DC. And when it came time to actually stand up to real fascism, uh, they ran and hide. None of them Could give a clear answer. None of them were willing to open up their mouths and say, this is wrong. This is bad. This is stupid. And I do not support what the president said. The harshest words we got were from Lindsey Graham, who said, I don’t think this is particularly a good idea. You know what else? Isn’t particularly a good idea. Keeping any of these Republicans in DC any longer.