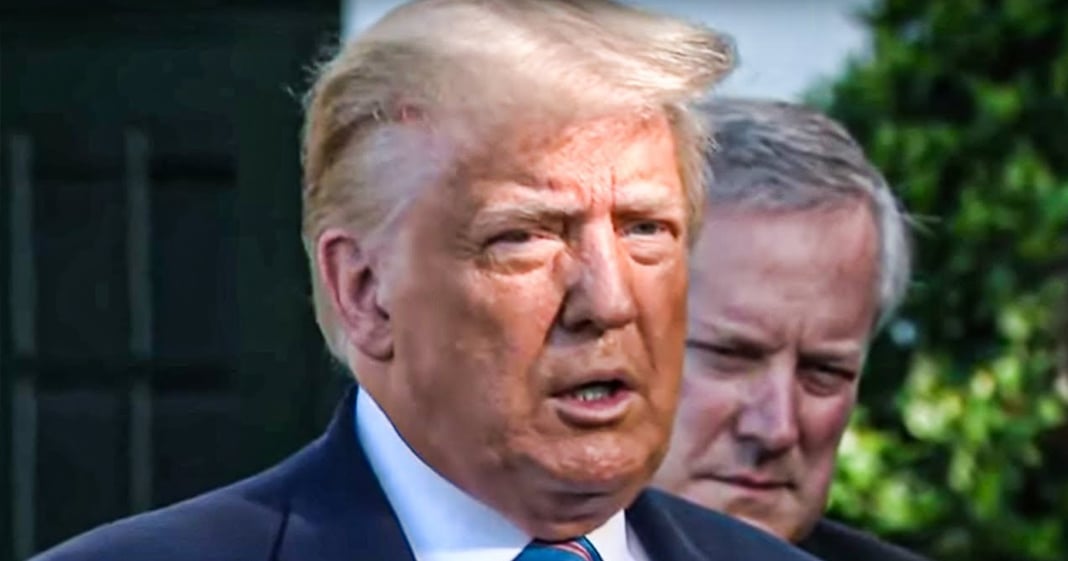 A complaint from a watchdog organization claims that the Trump reelection campaign has illegally “laundered” close to $170 million from the campaign to their personal businesses. Federal election laws require any payment totaling more than $200 to be documented, but there are $170 million worth of “undocumented” payments that have gone through a secondary firm and ended up in the Trump family bank accounts. Ring of Fire’s Farron Cousins discusses this.

According to a new complaint filed by the campaign legal center, uh, with the federal elections commission, the Trump campaign might have illegally, uh, essentially laundered as much as $170 million through secondary companies, uh, with the money eventually ending up in the hands of, uh, Trump businesses and Trump family members, this complaint, which is 81 pages long. It’s a big complaint, uh, for such a small campaign alleges that the Trump reelection campaign is not reporting all of their expenditures. See, here’s what happens with any campaign, according to the federal election commission laws, any action I spent over $200 has to be documented. It has to be verifiable. You know, there has to essentially be a paper trail. If you’re paying somebody something, whatever it is more than $200. And that’s to make sure that everything in the campaign is up and up essentially to prevent campaigns from self-dealing Trump campaign is not doing that.

Whether it’s intentional or whether it’s accidental this camp, a complaint alleges that there is no evidence that this campaign has done this at all. There is no paper trail, but we do know that they are making huge payments to the tune of $170 million to former campaign manager, Brad Parscale’s companies. And then we know that those companies are paying huge sums of money to Trump family members. Specifically, the ones we definitely know about are Laura Trump, Eric Trump’s wife and Kimberly Guilfoyle, Donald Trump Junior’s girlfriend, who are both being paid almost $200,000 per year to be seen with the campaign. Um, and weirdly enough from the Parscale company documents, uh, the payment’s going to those two women is not actually listed as salaries. So what the hell is the money going to them for? That’s what the campaign legal center wants to get to the bottom of. And they want the FEC to look into this because if the Trump administration, the Trump reelection campaign, excuse me, is in fact just using their campaign apparatus as a means to launder money into their own bank accounts, then yeah, that’s incredibly illegal and definitely prosecutable.

That is a violation of federal law, uh, which by the way, Trump would most likely not be able to be pardoned for, uh, let me read this from the report here. As detailed in the 81 page complaint filed with the federal election commission, the money went to business associates and Trump family members through two entities set up in control by former Trump campaign manager, Brad Parscale a clearing house firm called American made media holding corporation and Parscale strategy. FEC rules require all campaign transaction over $200 to be memorialized in spending reports containing the date amount and reason for the expenditure by failing to report payments to the campaign’s true vendors and employees, the Trump campaign, and Trump make America great. Again, committee have violated and continue to violate federal laws, transparency requirements, and undermine the vital public information role that reporting is intended to serve. So here’s the thing we do not know at this moment, if these, uh, non reporting incidents were intentional, you know, actively trying to hide something, we do not know if they were accidental.

You know, everything absolutely could be on the up and up. Uh, usually though, as we’ve seen with Donald Trump, typically not the case. So, you know, If past is precedent, uh, this could create some very serious legal headaches for Donald Trump. Uh, if it’s an honest mistake, then they can fix it, rectify it, and the complaint goes away. Most likely, uh, and the public gets a little more transparency until then. We’re left with a lot of questions and unfortunately not very many answers and just, you know, vague speculation as to whether Trump is using his campaign to launder money back into his family’s pockets.