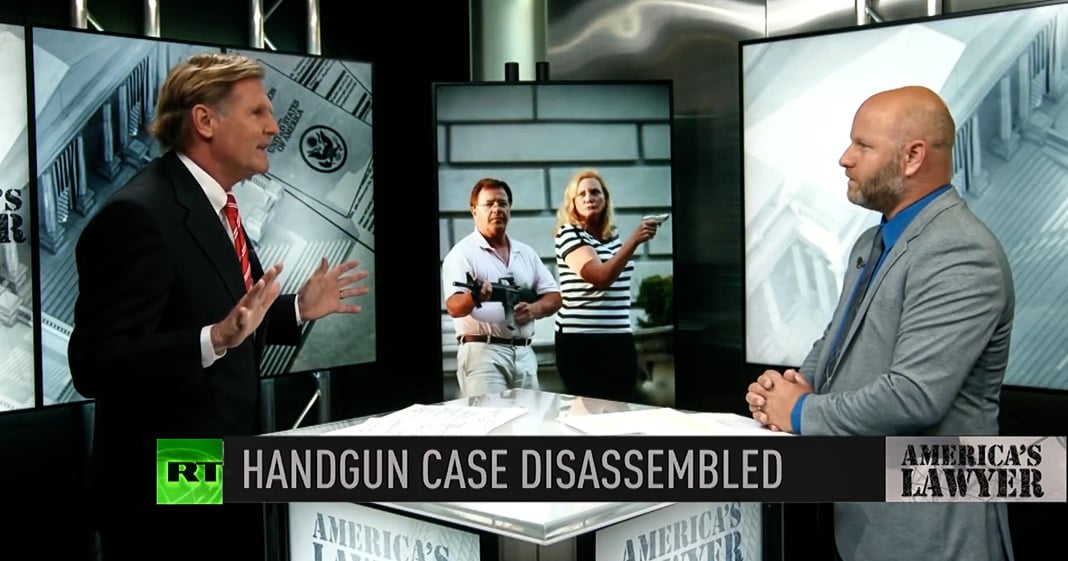 Mike Papantonio: Mark and Patricia McCloskey, the lawyer couple that’s been infamous for standing on their front lawn with guns pointed at a mob of protesters have been charged with one felony count each for their actions, but that’s just the tip of this iceberg and this story might not be what it seems. Farron, what a peculiar story. Okay. First of all, this, this looks like a really bad movie, doesn’t it? You look at this figure, you go, this is a really bad movie. Then the second thing you, you understand, if you talk to lawyers in that area, they’re going to tell you this prosecutor has really kind of light. She’s had her experience is kind of light. She’s coming in to make a name for herself. But why would you pick this case? I mean, this issue with the firing pin, that’s a big deal.

Farron Cousins: Right. What we know right now is that when the officers went in and issued, served the search warrant, they found the gun that she used. The firing pin was in the wrong position, which means the gun was incapable of firing. However, this is also worth pointing out, it was 12 days. There were 12 days in between this incident right here and when the police officers came and found the gun. So the crime lab, the assistant prosecutor goes into the crime lab and says, can you reconstruct this gun and make it to where it can fire? And they were able to do that. At which point, he’s able to say, okay, this was readily capable of firing. But the reason I point out the 12 days is because we don’t, you can’t tell from, from the, any of the pictures or the footage, was the firing pin misplaced then? Was it changed later? So that, that is an X factor that we don’t know about.

Mike Papantonio: Either way you cut it Farron, okay. A department tampering with evidence. This is evidence tampering. There’s no question about it. This is no different from a bag of sugar and somebody saying, hey, this is sugar. Let’s put some cocaine in it. You can’t do that. This prosecutor knows that. The crime lab knows that. This, you know, this is, this is such a fundamental flaw. And so all of a sudden, now they’re able to argue that the tampering is, is a deal killer. Here’s what this prosecutor’s counting on. She’s going to try this case in a heavily African American community. And she’s thinking, well, they’re just going to find against these folks. And then the governor said, he’s gonna.

Mike Papantonio: He’s gonna, you know, forgive the president said, he’s gonna forgive basically. I don’t know where she goes with this. Tell me about, the, the truth is there, there’s a defense that exists in most States and I took a look, it does exist there.

Mike Papantonio: It is, it’s called the castle doctrine. And that is, you have a right to defend your property if it’s, if you could reasonably argue that you were fearful for your, for your life or your property. So they had a right to do that. This prosecutor knows that. This what’s, what is her name, Garner? Kim Gardner.

Mike Papantonio: I mean, nobody knows who this woman is right now.

Farron Cousins: Well, the, the only.

Mike Papantonio: She’s, she’s counting on maybe, maybe they will.

Farron Cousins: Right. The only, the only argument in terms of castle doctrine, that she would be able to present and this is obviously the argument she would make is, was their home was their property were their particular lives actually in danger. As it stands right now, there was no necessarily evidence that these people were coming for them. We know they were headed into that community. And yeah they, they broke the gate. We know they broke the gate.

Farron Cousins: They were, they were going to the mayor’s house.

Farron Cousins: To protest outside of the mayor’s house. So that’s, that’s the argument basically from the prosecutor is that they weren’t coming for these people. And look, I’ll a hundred percent say, I, I, I, I hate the actions that the McCloskey’s took.

Mike Papantonio: Yeah. Why, why not put out water.

Farron Cousins: This was unnecessary and disgusting.

Mike Papantonio: Yeah. Why not put out water for the protesters? Why not have a lemonade stand, something. Where you’re saying.

Farron Cousins: For the, for the most part, you could have sat in there, closed your doors and just said there’s people walking by.

Mike Papantonio: Or, or could, or you could have said, look, here’s some, here’s some ice water for you.

Mike Papantonio: You could have done something that was decent. This doesn’t help. But this prosecutor, this is, this is all about her. Nobody knows who she is. I don’t, I don’t really know whether, but there’s some part of this story says George Soros helped her get elected. I think your theory is George, George Soros has made.

Mike Papantonio: Didn’t, wasn’t there some point where at one point they said George Soros was trying to fund Ring of Fire.

Farron Cousins: Oh yeah. We get those claims every couple of months here.