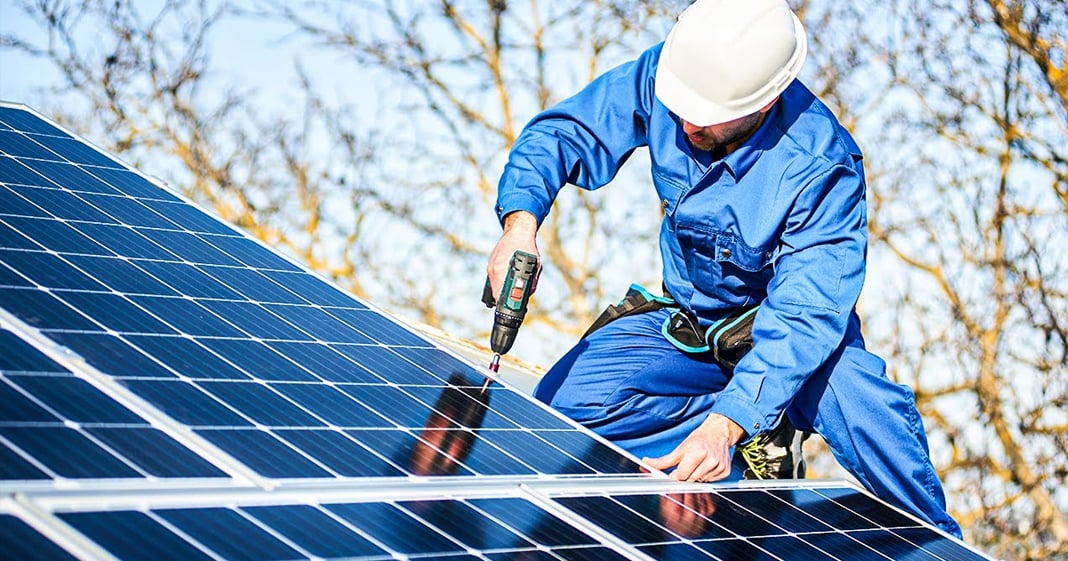 According to a new report released this week, the United States could easily put our economy on the road to permanent recovery by decarbonizing and switching to a green energy infrastructure. This move could create 25 million good-paying jobs in the next 15 years, and would also lead to a decrease in sick days and other pollution-related problems. It is a win-win for the US economy, but backwards-thinking politicians are holding us back, as Ring of Fire’s Farron Cousins explains.

According to a new report out this week by rewiring America, we could, as a country solve multiple problems at once with one very simple solution. And that simple solution is essentially decarbonizing our economy and moving forward with green energy. This report says that in 15 years, if we were to decarbonize and start moving towards a green economy and clean, renewable energy, we could create 25 million, 25 million permanent good paying American jobs in those 15 years. Now this comes at a time when the United States just false 40 million jobs in a matter of months because of the pandemic we saw, we continue to see to this day, by the way, how fragile the U S economy is how fragile our service sector is. And while those jobs will always be necessary, we are also watching other jobs, good manufacturing jobs here in the United States get shipped overseas. And politicians love to talk about how they’re going to bring those jobs back. But so far, none of them have none of them. They continue to let those jobs go. So what do we do? How do we fix this? How do we solve this problem?

Green economy, that’s the way to do it. That is the best way. That is the smartest way, because not only does it solve that problem of, you know, the job shortage, it also helps to shore up the middle class because these would be good paying jobs. So we can build a strong and healthy middle-class, which is the consumer class. These people go out there and they spend money on goods and services, and that is going to bolster the rest of the economy. You have to build from the ground up. And that is what this plan would do. And of course the biggest side effect of decarbonizing the economy as this report points out is you tackle climate change. You reduce emissions, you get rid of a lot of pollution, which by the way, also has the side effect of reducing the number of sick days that workers take less pollution is less. Illnesses reduces the number of heart attacks reduces the number of asthma attacks can actually lower blood pressure in communities like this. This is a wonderful, great plan that actually serves to solve multiple different problems very good.

Why aren’t we doing this folks? Well, we all know why don’t, don’t think that I’m actually legitimately confused about this. I understand why we don’t do this because the powers that be the elected officials from, unfortunately, both parties are too beholden to corporate interests. They’re too afraid to stand up to the fossil fuel industry. They are ready to ride that dying industry all the way into the ground because as they ride it, they’re getting cash in their own pockets too. That’s what this is about. They’re also afraid that, Oh, it may sting a bit the switch. Oh, they say the technology isn’t there. Well maybe, and by the way it is, but maybe if you had invested in it along the way, maybe if you had put in phasis on this industry, the renewable energy sector, you know, for the last decade, maybe our technology would be leading the rest of the world in it.

Instead we’re not, we’re playing catch up. We could have been the leaders, but we seeded that to other nations. We could still emerge as the leader. That is kind of what this report is telling us. It would take, uh, 15 years as it says, but the first three to five years would just be a heavy, heavy, heavy focus on manufacturing. That’s what we would do. And that’s where a lot of these immediate jobs have come from. Cause this would be immediate. We would have to start building these things. We would have to invest in the infrastructure. We would need the solar panels. We would need the wind turbines. We would need the battery capacity. Those are things that human beings would have to make and install. And that’s how we get this thing started. We get the infrastructure in place. We get the apparatus and placed it to capture the energy. And we go from there.

All it takes is politicians with a little bit of vision, a little bit of courage and a heck of a lot of integrity to stand up to the fossil fuel industry and say, this is the plan. This is what we’re going forward with. I don’t care what anybody says. This is the only path forward for us. And we can take it now and prevent the worst effects of climate change. Or we can wait another 10 years when large portions of our coastal communities are already under water Or two options. Folks. I know that kind of sounds dire, but climate change is that kind of issue. We can tackle it, head on and beat it, or we can react to it as it takes us down.