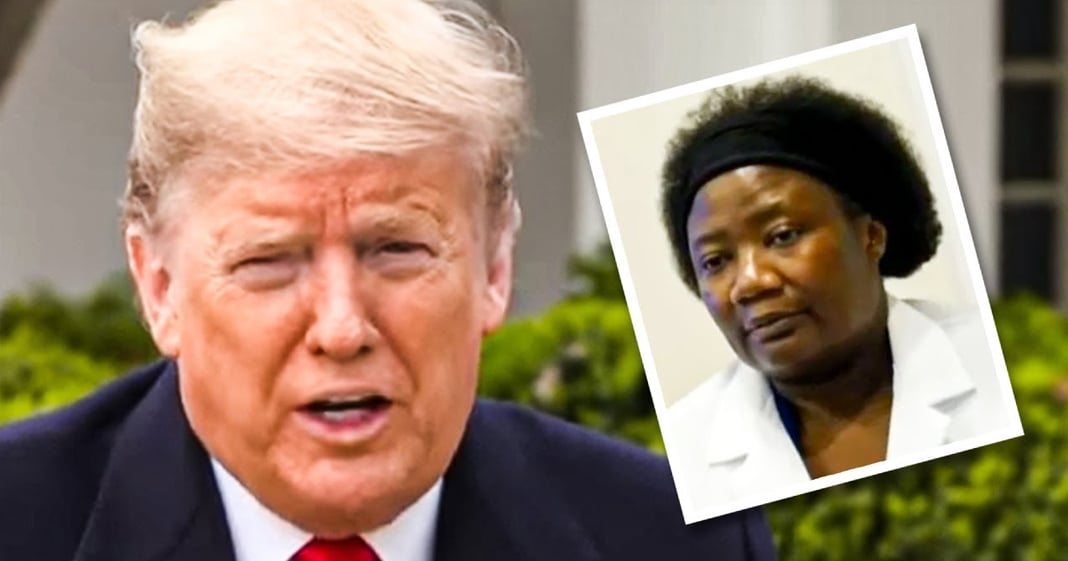 Donald Trump has found a new kindred spirit in the form of a pastor/doctor who says the kinds of things that Trump and other Republicans love to hear. The doctor, Stella Immanuel, said in a viral video that has now been removed that masks are not necessary because hydroxychloroquine can cure Covid-19. Studies say the exact opposite, but that’s actually one of the least troubling things that Dr. Immanuel has said in recent years. Ring of Fire’s Farron Cousins discusses this.

Donald Trump has a new favorite doctor to turn to when it comes to getting information about coronavirus and COVID-19. And that doctor unfortunately is dr. Stella Immanuel. Now recently, dr. Immanuel, and a group of several other doctors, uh, put together by the tea party Patriots, which is a corporate funded organization, uh, tea party Patriots got these doctors together, took them to Washington, DC, to the steps of the U S Supreme court, where these doctors gave little speeches about why everything that we think we’re doing for our safety is totally wrong. For example, dr. Immanuel got up there and she told us that one, you don’t have to wear masks. Nope, don’t do anything. Don’t worry about wearing the mask because we have a cure for COVID-19 and that cure just happened to be Donald Trump’s favorite drug hydroxychloroquine. That is the drug that Donald Trump has been promoting for months with absolutely no science to back up his claims because here’s the thing ever since Trump started promoting it, ever since the pandemic began, uh, people have been looking into it because we’ve been throwing everything at this virus to see what we could find to beat it.

Trump’s has hydroxychloroquine is the way to go. Well, there have been plenty of studies on it. A lot of the studies say that it’s actually not effective whatsoever. The FDA themselves say it’s not effective. Do not take it for this. And many of the studies have actually had to be halted halfway through because most of the people, uh, that they were studying, not most, but too many of the people that were in the clinical trial of hydroxychloroquine, uh, drop dead. Okay. So they stopped. They were running out of people to test it on. Cause everybody was dying. That’s what hydroxychloroquine can do if you take it when you don’t actually need it. And so dr. Stella Immanuel gets up there on the steps of the Supreme court. Nobody paid attention to it while it was happening. But then the video was posted online, got tens of millions of views on Monday alone, retweeted by Donald Trump, jr. Who then got suspended for 12 hours from Twitter for retweeting that retweeted by the president himself,

Doctor, Your Stella Immanuel has made her way into Donald Trump’s heart by doing a little more than promoting the, a dubious treatment that Trump himself has been promoting for months. But Trump needs to, uh, maybe, maybe sit back a little and think about the person he’s, retweaking the person that he’s holding up and saying, see, she says it, and she’s a medical professional. Now let’s back up on that claim just a minute here. Dr. Stella Immanuel is licensed to go practice medicine here in the United States. She did not. However, get her medical degree from the United States. She got it from Nigeria, moved over here to the United States, began practicing medicine while being a, a pastor of sorts. Uh, and the good folks over at the daily beast, I believe it was will summer went through some of her speeches, uh, or, or, you know, sermons. I, I guess they’re called, sorry, uh, sermons that have been posted to YouTube, uh, from, you know, 2015 and, and thereabouts and, uh, folks they’re out there.

They’re absolutely out there. And this is the woman that Donald Trump thinks is some kind of medical genius. And again, it is worth noting. This was put together by the tea party Patriots, which is funded by corporations. They put this group of quacks together and sent them to DC. So let’s look at a let’s look at some of the things that dr. Stella has said in the past, uh, doctor said, Della says that, um, demon sex, demon sex is what, uh, causes all sorts of gynecological problems and women. Uh, here’s a quote. She says, they’re responsible for serious gynecological problems. We call them all kinds of names. Endometriosis. We call them molar pregnancies. We call them fibroids. We call them cysts, but most of them are evil deposits from the spirit husband. Uh, they are responsible for miscarriages impotence men that can’t get it up. Um, so here is, she goes on to explain what, what the spirit husband is basically, uh, for both men and women actually, cause it’s not just spirit husbands, their spirit wives.

You go to sleep, you have a sex dream, but it’s not actually a dream. You know, the person you’re having sex within the dream is in fact, either a demon or a witch and that evil spirit that you are for real, uh, having intercourse with puts, puts their evil in you. And in that evil, uh, manifests its way, uh, manifests in some kind of illness in you. If you’re a man, you probably going to be impotent from now on, if you’re a woman, you’re going to have all sorts of gynecological problems. Cause cause you had sex with a demon. And if you’re not sure whether or not you have, um, been violated by somebody from the spirit world, she explains how you can tell if you have been, um, Okay.

You can tell if they’ve taken a demonic, uh, husband or spirit wife, if they have a sex dream about someone they know or a celebrity wake up aroused, stop getting along with the real world, real world spouse, lose money or generally experience any hardship. So basically if, if literally anything happens in your life, you, you fucked a demon. I don’t know. I don’t know how else to say that. That’s what happened according to the doctor that the president of the United States retweeted yesterday. Hmm. She also says that we are using alien DNA to create vaccines here in the United States. Uh, she says that, uh, they’re trying to develop a vaccine or a medication that will make people stop being religious here in the United States. She blames witchcraft and wizardry. For example, specifically, she calls out Harry Potter and the wizards of Waverly place from the Disney channel.

Us as that’s making kids gay, it’s making them evil. It’s making all kinds of things. This woman is going to lose her medical license. I have to imagine. I have to imagine somebody is already on that right now, looking sure, first of all, to make sure it’s even legit because these statements, these statements are dangerous. These statements are crazy. A sane person would not say these things. And so dr. Immanuel does need to be checked out. And I’m not saying that to be funny or mean, I’m saying that because this is dangerous because tens of millions of people saw her and believed her in that video where she said, you don’t have to wear a mask. We have a cure for this millions of people believed that. So not only does she need to be investigated to make sure that she is mentally competent enough to continue practicing medicine and that her credentials actually check out because now I have serious doubts based on what she said in the past, but also she needs to go ahead and lawyer up because she did give bad medical advice as a doctor. And that opens her up Lawsuits, lots of them From lots of people for lots of money.

So she needs to go ahead and make sure that she has a legal representative on her side because I can promise those lawsuits are going to come. Those lawsuits might even come before the investigation itself comes, but either way, Donald Trump promoting this woman who, you know, prior to this was just some, you know, doctor in a strip mall in Houston, Texas, that’s actually where her practices it’s inside a strip mall, nothing wrong with that. But Had the president not tweeted this out, we would have been able to ignore her. She likely would have been able to go along, uh, go about her life, you know, giving her crazy sermons, but not really causing any real damage to anybody maybe, or maybe the president by retweeting, her caused people to look into her to finally expose what kind of horrible thing she’s been saying and doing in the past. We don’t know. We don’t know if she’s done horrible things to her patients where if she saves the horrible, crazy stuff for her sermons, but that’s definitely worth looking into, and I can promise you anybody who is a patient of this woman who in pediatrics, which is even more terrifying. Yeah. They’re probably going to take a second look, see if maybe there’s another doctor available in Houston that they could take their kids to. I know I would, if I found out my kids’ doctors were saying crazy stuff like this.