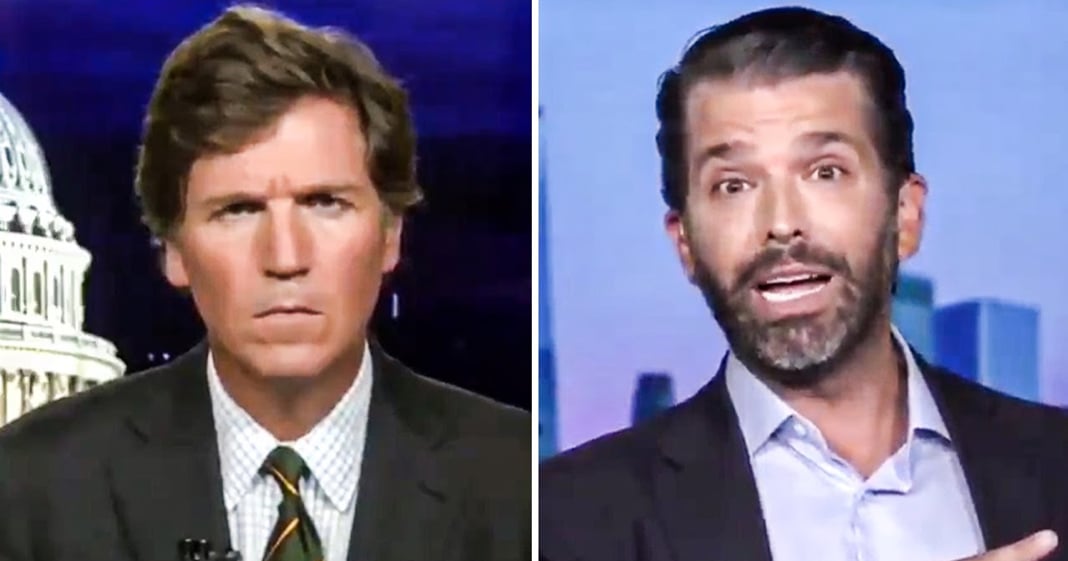 Donald Trump Jr. shared a dubious video on Twitter yesterday. The video featured doctors claiming that masks were not necessary, and the social media networks collectively pulled the video from their sites and started temporarily banning people who had shared the video, which included a 12-hour suspension for Junior. He immediately went on Tucker Carlson’s show to discuss what he feels is the crime of the century. Ring of Fire’s Farron Cousins discusses this.

So yesterday, Donald Trump Jr. Was the victim of what is essentially the crime of the century. Uh, he shared a video on Twitter of dr. Stella Immanuel and her group of doctors who went to the steps of the U S Supreme court yesterday to, uh, tell us all that we don’t need to wear masks. And they were basically spreading a bunch of medical misinformation, and Trump jr. Decided to share that video because it also, the doctors talked about how great hydroxychloroquine is. And anytime the doctors say that you can guarantee that some member of the Trump family is going to promote it because it’s going to back up the pseudo science that they have been pushing, uh, with regards to that malaria drug for months now, uh, the FDA says it doesn’t work. Many independent studies have proven it doesn’t work, but Trump still promotes it and they’ll promote anybody who also promotes it.

But it was the fact that this doctor, that this group of doctors said, you don’t have to wear a mask that’s wrong. That is a essentially malpractice and Trump retweeted it. Trump jr. Retweeted it as well. And jr paid the price. Jr got a 12 hour timeout from Twitter for 12 hours. He couldn’t tweet. He was suspended briefly. And as I mentioned to him, that was in fact, the crime of the century. There, there could be no greater injustice on this planet than Donald Trump jr. Not being allowed to tweet for half a day. And of course, right wing media loves to hype it up. Whenever a prominent Republican gets banned from a social media outlet, regardless of the fact that you literally broke the rules. Like you were wrong, you got punished for it, you deserved it, but still they got to hype it up. So Tucker Carlson allows jr to come on his program last night, where jr starts ranting incoherently about the ban. And for some reason, Jake Tapper take a look.

See because Jake Tapper himself a few weeks ago, posted study finds hydrochloroquine helped coronavirus patients survive better. Now why is Jake Tapper not spreading misinformation, but I somehow am. And again, I’m not a doctor. I didn’t claim to be. I just put something out there that challenged the narrative. And because I have a large platform I’m canceled, you know, who else got thrown off Twitter for the same offense, Sidney Powell, who happens to be Michael Flynn’s attorney and has been someone who’s been sticking it to the left. So if fake Jake at CNN, who’d no one is going to confuse as a conservative can put it, but not be censored, not be questioned and certainly not be grilled by a panel of his peers on CNN. Why is it that it’s happening to me and other Trump, conservatives and other conservatives in general? Uh,

Exactly sure. What Jake Tapper had to, uh, had to do with any of the ban. Really, really trying to wrap my head around what he’s saying there, but here’s the point. Um, what we just saw is what happens when, when a human being goes their entire life, you know, 30, some odd years in Junior’s case without ever having to face consequences for their actions. Finally, you found yourself in a position that you couldn’t talk your way out of you couldn’t bribe your way out of you. Couldn’t buy your way out of, there was nothing you could do. You had to sit there and face the music and it drove you insane because you feel like you’re above that. You feel like the rules shouldn’t apply to you. They shouldn’t apply to your family. They shouldn’t apply to anybody who has that kind of money and or power. But guess what they do, the rules apply to everybody and calm the hell down a little bit about it to junior.

It’s just Twitter. It’s just a website that said, Hey, you can’t post anything on here for 12 hours. This is not some big grand conspiracy against conservatives. This isn’t sticking it to the Trump people because they hate him so much. All it was was you violated their terms of service, which you agreed to. When you sign up for the website, you probably didn’t read them. Nobody reads them. I didn’t read them, but we all agree to them and we’re all subject to them. So if you violate those terms knowingly or not, you’re going to get punished for it. It’s not because you’re a conservative it’s because you’re a jackass spreading misinformation that could easily get people killed during this pandemic.