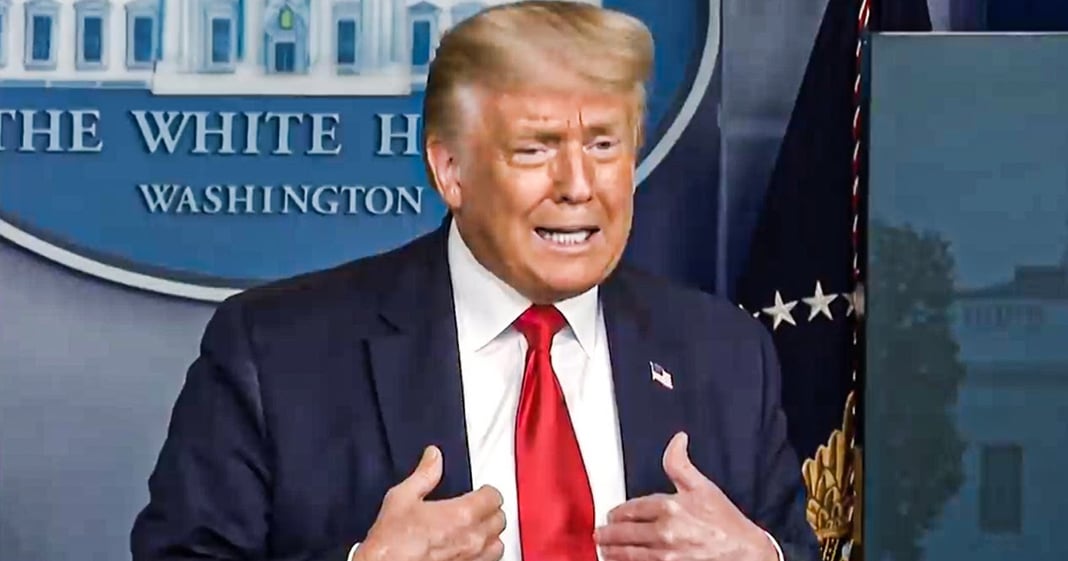 Donald Trump admitted during Tuesday’s press briefing that nobody likes him. This was a bit of an odd admission, considering the fact that it wasn’t provoked or on topic at all. But this bizarre admission does help us understand a little bit more about the delicate psyche of the President, and let’s us see what is really on his mind at all times. Ring of Fire’s Farron Cousins discusses this.

So it sort of is curious, a man works for us with us very closely, dr. Fauci and dr. Birx also highly thought of, and yet they’re highly thought of, but nobody likes me. It can only be my personality. That’s all, Nobody likes me, says the president of the United States. Now what’s really weird about what we just saw and that a Tuesday white house, Corona virus press briefing, was it? Nobody asked, nobody asked that question. Nobody said, Hey man, how you doing today? You okay. I mean, it’s something bugging, you know, he just goes off on a tangent talking about dr. Anthony Fowchee having a high approval rating, but him not having a high approval rating and say, nobody likes me. I don’t know why. Maybe, maybe it’s my personality. And then, you know, it’s, that was, that was depressing. That was actually okay.

Almost sad. I could almost, I feel sorry for you, if you hadn’t made the entire thing about yourself, right. Cause, cause we were there to get any kind of indication about how you were feeling personally. Um, we weren’t there to check up on you. We were there to find out the state of the country, you know, the state of the pandemic. What are you doing to help protect American citizens? If anything? Um, yeah, it’s sucks that you’re sad, but that’s kinda also on you, right? I mean, you’re not suffering from legitimate depression where you don’t have any control over, over how you feel or the fact that you, you don’t feel anything. What you’re suffering from is a bruised ego. You’re sad because your narcissism isn’t working out for you right now. That’s that’s not something we can feel sorry for. That’s not something we’re going to give you our pity for, if you want people to like you, all you gotta do is give them reason to like, you know, if you want a higher approval rating, you can actually control that.

Cause we already know you’re not one to worry about going through the right checks and balances to do stuff, right? You could straight up right now through the department of education, say, you know what? College is free here in the United States. I’m issuing an executive order. I challenge anyone to take that away from the public. You could probably do the same for universal healthcare. Would it be completely legal? Probably not, but you don’t care. You’ve broken the law plenty of times, but I guarantee you that would be a good way to get people to like you, you want people to like you, how about you go to the treasury and say, Hey, send every person in this country, a $2,000 check every week for the remainder of this pandemic, how y’all make the money anyway, stop acting like it’s a real thing. You know, it’s, it’s all, it’s all for show. You can do any of this by the way, some of illegal Soviet, not, but you don’t care if your real goal was to make people like you do something that actually benefits them. But see, you can’t do that. And that’s the problem. That’s part of your narcissism. You legitimately do not understand why people don’t like you and you’re legitimately incapable

Of seeing them Things from their perspective, because that’s part of this, a disease you got kicking around in there that we think is there, um, your incapable. Or of seeing them Pain of these people, feeling the pain for these people. And that is why you’re unable to enact any one of these policies I’ve mentioned that would actually benefit them because you do not believe that they are actually suffering no in your head. Only one person is suffering And that’s you, but you’re suffering because you’re incapable of it. Understanding the suffering of everybody else.