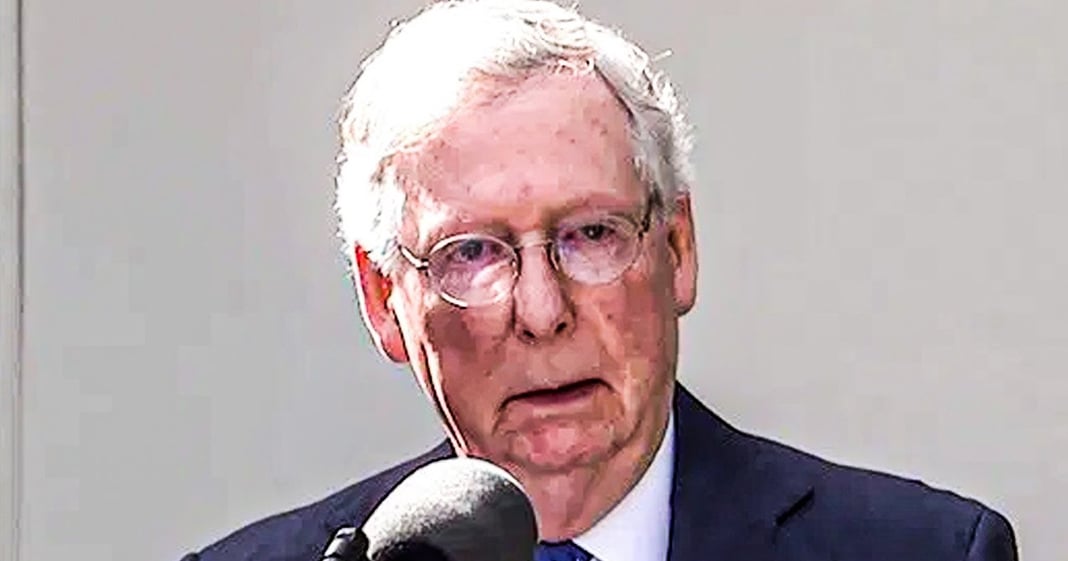 On Friday, the eviction moratorium that had been in place for months expired, and Senate Republicans refused to take action to save it. As a result, the millions of renter households that were unable to pay rent for the past few months now find themselves in dire straits as landlords are now free to start evicting people. Ring of Fire’s Farron Cousins explains the risk and why it got so bad.

This past Friday, Republicans in the Senate allowed the eviction moratorium to expire. Now, this was in a moratorium on evictions, obviously that have been put in place, uh, towards the early days of the pandemic. It was not one of the immediate, uh, pieces of relief that came out, but it came out shortly after and it has helped millions of people who have lost their jobs, lost their incomes. It has helped them to stay in their homes. As recent reports have shown us through, uh, from may, June and July, nearly a third of Americans could not make their rent or mortgage payments. But now that this eviction moratorium has officially expired. And because Republicans in the Senate are showing absolutely no signs of putting it back into the current relief package that they’re working on, millions of people are suddenly at risk of losing their homes. And FYI saying millions of people are at risk is not an overstatement. According to see NBC, not exactly a, a left wing website, uh, they’ve put together a health, a little more Map… Here in this map,

Shows every individual state and the percentage of renting households in that state that essentially could be evicted today for missing, right? And if not today, than in the very near future, because they’re not going to be able to pay their rent, the lowest percentage out of any of the 50 States that make up this country, the lowest percentage is 22% of renter households being evicted. That’s the lowest, that’s literally the best. Take a look at some of the big ones here. Uh, Louisiana, Mississippi, 50 and 55% respectively solid red States, Florida swing state 51% at risk of eviction, Texas 48% at risk of eviction, Georgia 46% at risk, um, New York, 46% at risk California, 37, Wisconsin, 34, uh, Minnesota, 40% Iowa, 48% Ohio, 41%. The, the, the list goes on. There is a link to this, by the way, uh, in the description of this video, this chart is incredibly important. Right now, this chart is something that everybody in this country needs to see to understand how bad this problem really is and how much good that eviction moratorium did.

And now it’s gone. Maybe it’ll come back, but here’s the other kicker too, right? We have not had a stimulus checks from the federal government since April, April was when people all over the country got April. Now, corporations still been lining up for handouts, lining up for bailouts and lining up for those small business loans. Even though they’re not a small business. In fact that one still has money in it, because all the pigs at that trough have taken all they want and they can’t fit anymore. In now, I’m not talking about legit, small businesses. Y’all do whatever you need to do. I’m talking about the big major corporations that created these little shell companies real quick saying, Oh, I only have three employees. I need $8 million from your fund. Yeah, those folks can go straight to hell. That’s what they can do,

But We haven’t had any help. We haven’t had any aid we did for those who were unemployed, have the extra $600 per week and unemployment benefits. But along with the moratorium on evictions that also expired on Friday and Republicans are saying, now, we’re not going to give you your 600 back. We might give you 200 a week extra, but guess what folks that is still not enough to solve the renting crisis in this country, because that’s what this is. We would be looking at a financial collapse, the likes of which we haven’t seen in over a decade in this country. If we had stakes where a States where 50% or more of renters suddenly found themselves homeless, where do they go? Do they go to shelters where suddenly these places become inundated with a couple extra thousand people, depending on the city where they’re no longer able to do social distancing, where they don’t have enough supplies for people.

So then you’re going to see the virus explode in these hotbeds already. This is not workable. This is not workable. The only possible thing that we could do is to get that moratorium back in place. That is the only solution to this. And while it is in place, how about lawmakers do something to fix this problem overall? Because it’s not just because of the pandemic. It’s because of the fact that there are too few places here in the United States. In fact, I actually don’t think there’s any where a minimum wage job can’t afford a one bedroom apartment. That’s a renting crisis. That is a housing crisis. That is something that has to be addressed and fixed. So that way, when the next crisis hits, when the next pandemic comes, when we get these horrible weather events, that force people, whatever it is, we’re not in this same situation.

Let’s think ahead for once as a country. How about that? You know, the only time this country wants to actually think ahead and look ahead and do something proactive is when they want to go over to the middle East and start a war. That’s the only time we do something where it’s like, well, bad things could happen in the future. So let’s deal with it now. But when it to things like addressing climate change, addressing the housing crisis, the economic crisis, you know, regulating the big banks, pollution infrastructure, nah, those things, we just wait until the bottom falls out. And then we do the bare metal,

No mom to fix it. That is where we are at as a country. This crisis can’t wait. This is a crisis that is about to hit now, right now folks, one third, almost one third of people in this country could not make their rent or mortgage payments for may, for June and for July. Now, in most areas, if you miss a single month’s payment, you’re outta here. Some depending on the landlord, depending on if it’s a corporation that owns it, depending on the bank that owns your house, some might give you a little leeway and say, okay, you got to pay that, but we we’re going to work with you on here. But three payments. That’s that’s that’s eviction territory. And for these people who did have to miss all three of those payments because of the pandemic, because they lost their job. And because their government did not do a thing to take care of them, they’re in very real trouble right now.

And if we’re sitting back expecting these landlords, are these banks that own these rental properties to do the right thing. Yeah. Don’t hold your breath on that. Because we have seen time after time, decade after decade, that if you rely on corporations or bankers to do the right thing, you’re going to be re waiting for all of eternity because it’s never going to happen. That’s what we’re looking at right now. The only people in this country who can do something about this are the ones sitting up in Washington, D C in the house in the Senate. Democrats might be willing to go back on and put another moratorium in place Republicans. On the other hand, they seem perfectly fine with letting this next economic collapse and this next housing disaster hit right before an election. I don’t think that’s going to play out for them the way that they think it will.