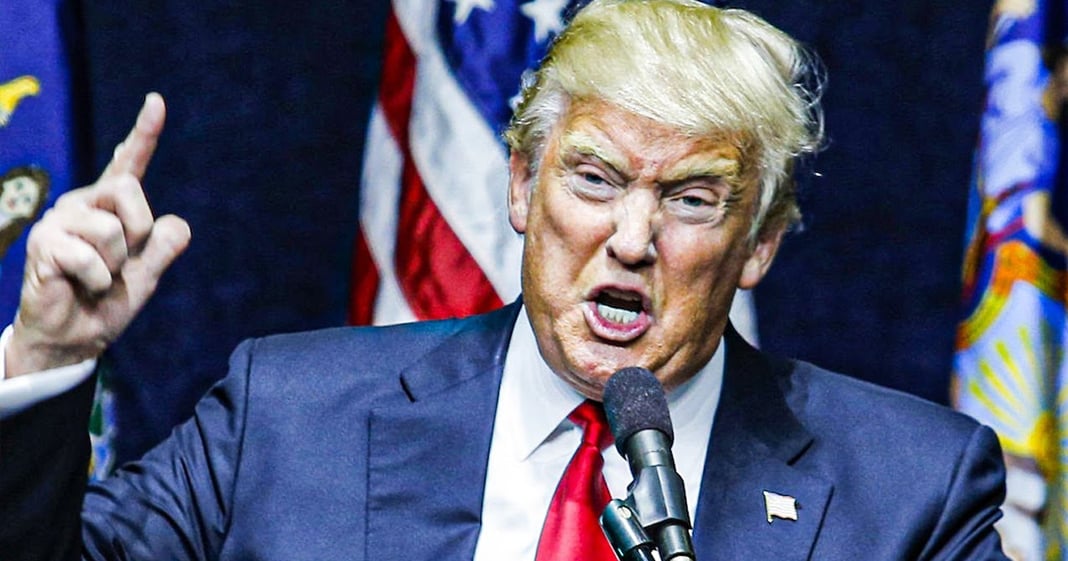 In a bizarre and unprovoked tweet on Monday, the President claimed that it was illegal for negative stories about him to trend on Twitter, and that the social media company was doing this intentionally to hurt him. Even under the most dubious of laws, this doesn’t come close to being illegal at all. But in Donald Trump’s world he would love to see any criticism of himself outlawed. Ring of Fire’s Farron Cousins discusses this.

So yesterday, Donald Trump apparently invented a new law and that new law is that Twitter is not allowed to let any negative stories about Donald Trump trend on their little trending section. Um, I don’t know if this new law actually extends to all negative news or if it’s just about Trump or if it’s just about Republican, he wasn’t real clear, but he was clear about the fact that what’s happening right now is definitely illegal. Here’s what Donald Trump tweeted out on Monday afternoon. So disgusting to watch Twitter’s so-called trending where so many trends are about me and never a good one. They look for anything. They can find, make it as bad as possible and blow it up, trying to make it trend really ridiculous, illegal. And of course, very unfair. Now, ladies and gentlemen, this is not a, uh, pubescent teenager in their emo phase, writing this tweet.

This is the frickin president of the United States in the middle of a pandemic civil unrest coast to coast. His biggest concern, the thing he chooses to focus on right now is the fact that negative stories about him trend on Twitter. And he doesn’t understand why, but he does believe wholeheartedly that somehow it’s illegal now on that front, obviously, no it’s not illegal and no Twitter is not cultivating these stories and forcing them out there. This is based on algorithms. This is people sharing somebody with 2 million followers, shares a story. It’s going to get a bunch of likes and retweets. That’s how it goes. But Trump is trying to, I think, based on what Mark dice, uh, said in response to Donald Trump’s tweet, uh he’s you know, uh, with the Trump campaign and a big Trump supporter, he said that, you know, Twitter should lose their, uh, section two 30 protection, which means that a social media network is not considered a publisher of content.

And therefore they cannot be held responsible for content posted on their sites. Uh, but that still wouldn’t even apply to this. So Mark dice, definitely not illegal genius that anybody should be listening to on this issue, no matter which way you slice it, this is not illegal. Uh, even if Twitter, I, if Jack Dorsey himself, we’re going out there finding negative stories about Trump and just saying, put this in the trending feed. That’s also not illegal. He could do that. This is his website. That’s his platform. So no way to cut it, there’s no way you can stretch it to make it illegal. But again, this is from the president of the United States folks who one has no other concerns than what people are saying about him. And two doesn’t seem to think that there’s other news out there worth, uh, worth talking about, but here’s what gets me, right?

This is affluenza. This is what happens. When everything in your life is handed to you. When you surround yourself with yes, people, you believe everything is about you and that everything you do is fricking perfect. So when you have to step out of that bubble, which Trump has since he became president, he’s no longer in that bubble. He cannot control everything around him. His people can’t control everything around him to make it better for him. He is forced to see what the world actually thinks of him. And they, I hate him. Sorry, manga hat wears. That’s the truth. Look at the polls. Look at international polls. Most people on planet earth do not like Donald Trump and for good reason, he’s horrible at what he does. Both his personal life and his professional life and professional life. That includes both his political life and his business. He’s not very good at it. And his history shows that if he wants positive media stories about him, do something good, do something. That’s not just going to benefit. You do something for the betterment of human kind, but you can’t cause you, you only care about yourself. You’re incapable of caring about another human being. So you’re going to get negative stories. And if you go on Twitter, Twitter’s trending section. You’re going to run into them. But no matter how many negative stories you run into on Twitter about yourself, Donald, none of it is illegal.