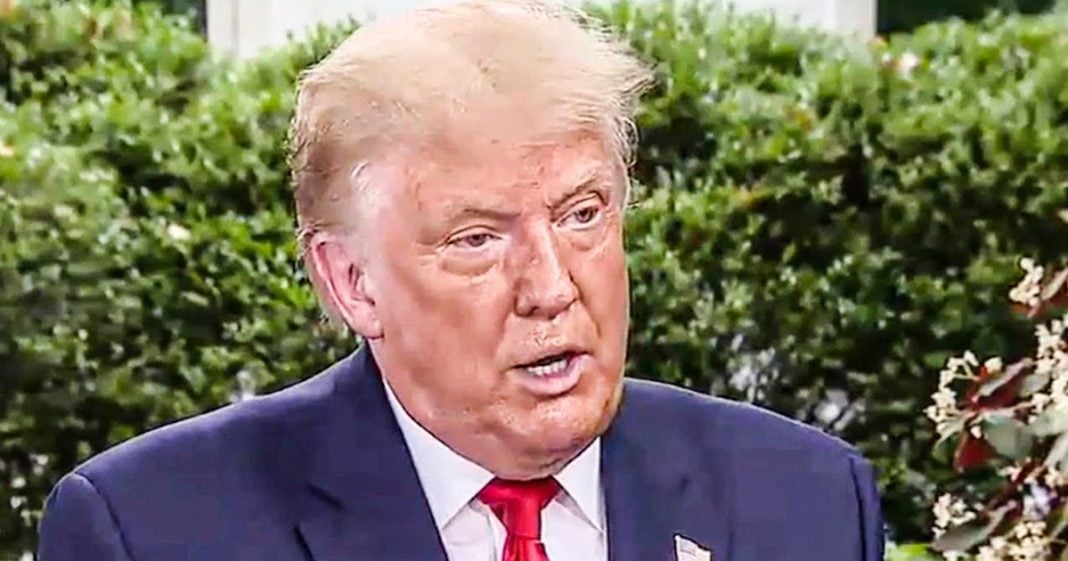 According to the latest round of polling, voters in swing states (most of which are currently Red States) are not happy at all with Donald Trump sending in his DHS troops to US cities, and a majority of these voters want Congress to step in to stop it. Trump blew the opportunity to use Nixon’s election strategy from the 1960’s to his advantage, and instead responded with creeping fascism, and voters are prepared to make him pay for this decision in November. Ring of Fire’s Farron Cousins explains what’s happening.

According to the latest round of polling, Donald Trump is torpedoing his own campaign with his law and order strategy. Let me give you some backstory. Before we get into the current poll numbers, we all know that Donald Trump is sending out his Homeland security goon squads to go out there, suppress these protests arrest people before they even commit crimes by the administration’s own admission. And the reason Donald Trump is doing this is because back in the sixties, Richard Nixon ran on a similar, uh, pledge to Americans to return law and order to return normalcy. Here’s what was happening back then, civil rights movement. There were wide scale protests. There were police officers out there, man, handling these protesters, you know, turning the dogs on I’m turning the hoses on them. And the public just wanted all of this to stop. They wanted somebody, anybody that was going to come along and return things to normal, protect them, keep them safe.

Trump thought he could use that same strategy in 2020. Well guess what America in 2020 is not America in 1964. We’re simply not. We’re different. Not only are our personalities and attitudes, but our demographics, right? White people don’t have this crazy, super majority where you can come along, throw out some racist dog whistles and get most of the voters to be on your side. It doesn’t work like that anymore. You can be effective with that. Trump wasn’t 2016, but the public also understood something in the 1960s, Richard Nixon was the challenger and he was able to pin all of these things happening on his opponent, the incumbent, right? Cause if you’re the incumbent and these bad things are happening, they’re happening on your watch. See that’s the part Trump then factor in. He is the incumbent. I mean, we have seen his campaign try to show us videos in Portland and say, under Joe Biden’s America, this will be happening everywhere.

It’s like, okay, but this is actually happening in, in your America right now. You’re the president. You did this. And so pub, uh, the public’s not buying it. Voters are not buying it. And the latest round of polling is so encouraging because it shows that in red States, three red States to be exact, a majority of voters do not approve of Trump sending in these DSS, DHS agents. They want the agents gone and they want Congress to step up and rein it in. They want the Democrats to do something and to fix it. I wouldn’t hold your breath on that either. But here’s the numbers in Arizona, nearly two thirds of voters say they’re following the situation in Portland closely. 52% of all respondents in the state oppose the use of unidentified federal agents to suppress local protests and 51% support Congress acting to stop it. Nearly two thirds of people in Maine are also paying close attention. 56% say they oppose Trump’s use of federal agents and want lawmakers to stop it. Uh, more than two thirds of North Carolina voters are monitoring the crackdown in the Pacific Northwest majority of respondents, 54% say they oppose the agent’s suppressing protests and 52% want Congress to end it.

Those are three States that, uh, not only just Trump really need to win in order to be successful, but it’s also three States with Republican incumbents that are not doing well. In fact, all of the Republican incumbents in those States right now are trailing their democratic challengers. So if Republicans lose those three seats and Democrats gain those three seats, that’s a big loss for the GOP. That’s a big gain for Democrats. That might be enough to turn the tables and the voters aren’t buying it. Folks. Trump thought he could come in with this 1960s mentality, pen it all on his, uh, opponent forgetting the fact that he is the incumbent and when shit hits the fan, the incumbent is the one that has to pay the price.