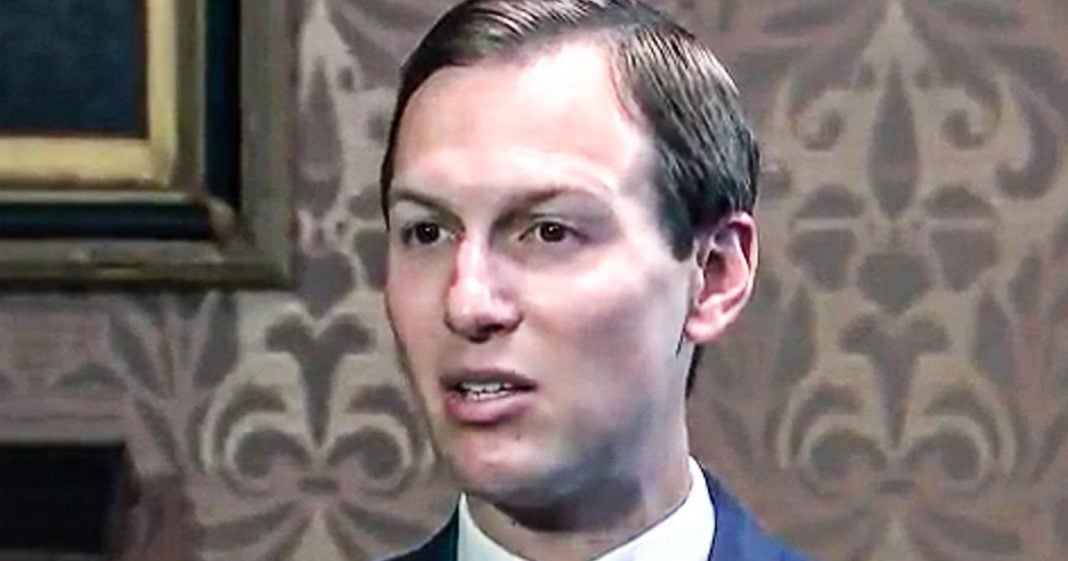 House Republicans fear that they are in for another Blue Wave that could wipe out even more Republican seats in November, and they are begging the RNC to give them some cash to run better campaigns. But, according to House Minority Leader Kevin McCarthy, Jared Kushner is refusing to allow that to happen. Kushner allegedly has more power over the RNC than chairwoman Ronna McDaniel, and he wants to save all the cash he can to help Trump win reelection. Ring of Fire’s Farron Cousins explains what’s happening.

According to a new report from the Washington post over this weekend. Uh, Jared Kushner might actually cost Republicans even more seats in the house of representatives after this November’s election. And here’s why, according to this report, a house minority leader, Republican Kevin McCarthy has been begging the Republican national committee, the RNC to give him more money for his embattled Republicans seeking reelection. Not every Republican is embattled. Some of them have an easy path to victory. We’re not worried about them, but McCarthy says, I got a lot of Republicans out here who could lose. They could lose the Democrats. Democrats could get an even bigger blue wave than what we saw in 2018. So I need that money RNC right now, folks has a ton of money, a couple hundred million ready to go for elections. And Kevin McCarthy is just saying, Hey, throw, throw some of this way folks.

We need it. But according also to Kevin McCarthy, there is one person standing in his way. And that one person is Jared Kushner. Son-in-law of president Donald Trump. And here’s what McCarthy says. Apparently Jared Kushner has been given a lot of control over the official Republican party apparatus even more so than RNC chair, woman, Ronna McDaniel. And again, this is all according to the Washington post reporting and as such Jared Kushner is the one who is pretty much controlling the purse strings right now for all of that money they’ve raised. And because he understands that his father-in-law is facing a very tough reelection, he wants to keep all that cash that he can for Ivanka his father so that, you know, he doesn’t lose his job. She doesn’t lose her job and Jared doesn’t lose his job. Then they got to go back to New York where reports say that they’re kind of being shunned by the New York Highlife right now.

And they don’t care whose career or which party they destroy to retain their positions of power. Now, Democrats can look at this story and you know, we can just sit there and say like, ha ha, you guys deserve this, but let’s look at it from another angle. Let’s pretend for a second where Republicans just for a second. Cause I don’t think I can pretend to be that any longer than that, I would be furious right now. And I would be calling for Jared Kushner’s immediate removal from American politics for the rest of his life. Because if Trump does win reelection at this point, it would essentially be a Pyrrhic victory. He will have burned down the Republican party’s apparatus in order to maintain his power. And he’s not going to have As much power because Republicans are likely to lose even more seats in the house, which means the Democrats can get far more aggressive with their agenda. And if down-ballot Republicans are in fact effected, it’s not only going to affect the house.

It is also going to affect the Senate where control is up for grabs and Republicans have more seats to defend. Then Democrats, this doesn’t end well for the Republican party at all. You know, you can win the battle and still lose the war. And that’s what you’re facing right now. When according to Kevin McCarthy, it is 100% because of Jared Kushner, because Kushner only cares about his own power. I guarantee you, this isn’t even about Trump’s power. It’s about Jarrett’s. Cause if Trump loses his job, Jared loses his Jerrod’s. Name’s already tainted. As far as we know, he’s still facing several investigations up in New York. This guy doesn’t want to go back home. There’s nothing for him there, but if he can keep his power for another four years, he can keep talking to foreign leaders, maybe set up some deals for real estate ventures. Once he leaves office on his own terms, because his boss has been term limited and he doesn’t care if he burns down and causes Republicans to lose every single seat that they currently have in the process. And all I can say is, Hey Republicans, you deserve every single thing that’s happening to you.