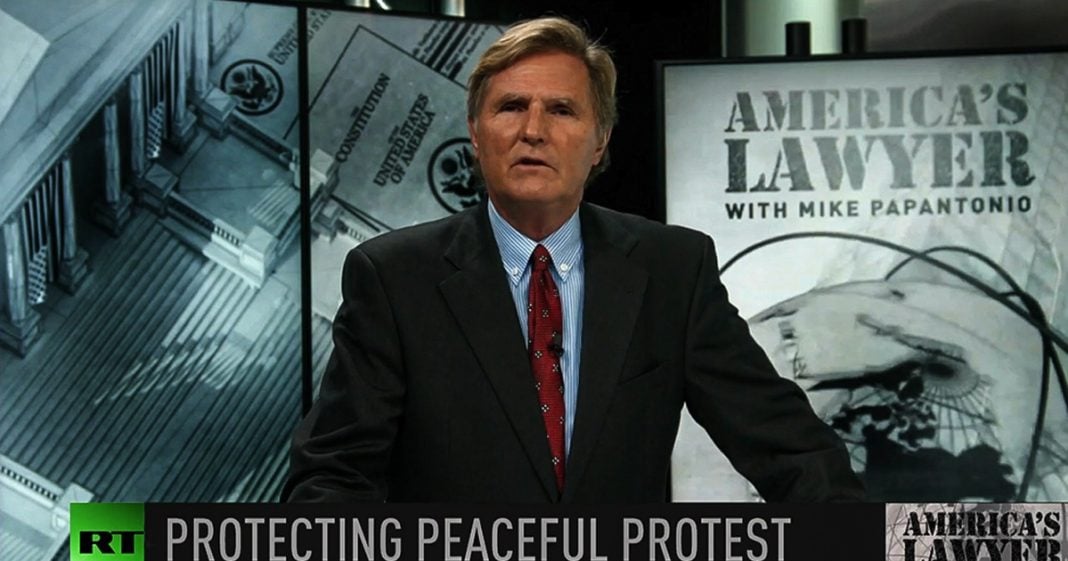 Via America’s Lawyer: The state of New Mexico has filed a lawsuit against a militia group that has posed serious threats to the public in the past. Mike Papantonio explains more.

And finally tonight, some good news. The state of New Mexico has filed a lawsuit against a militia group that incited violence at a recent peaceful protest. The group being sued is called the New Mexico Civil Guard and the state maintains that this independent group has posed serious threats to the public in the past. It’s not their first time. So why is this good news? Because it helps send a message to anybody who attempts to hijack the kind of protest that we’re sometimes seeing across the country, that, that are not above prosecution. That group that interferes can be prosecuted. This is a situation that says that. The right to protest is guaranteed to all Americans, but a line is drawn at violence. A line is drawn where property damage and the disturbing visions that we’re seeing in some of these protests that aren’t really protest. It’s almost criminal conduct. But this group has no right to interfere. They’re, nobody’s told them this is your right to get involved.

So right now, the left and the right, the, the behaviors that we’re seeing on both sides have displayed something that should not be tolerable in our society. It’s not protected constitutional conduct, but at the same time, it doesn’t permit this independent group to get involved in something they shouldn’t be involved with. This should also be good news for the organizers of these peaceful protests, because when one of these groups infiltrates a protest and starts destroying police cars or throwing bricks through windows, their message is lost. It’s a sea of violence is all that the public sees. Hopefully more of these lawsuits are going to be filed to weed out the bad actors and allow real, genuine peaceful protests to continue.

That’s all for tonight. Find us on Twitter and Facebook @facebook.com/rtamericaslawyer. You can watch all RT America programs on Direct TV Channel 321 and also stream them live on YouTube and be sure to check out RT’s new portable app, where you can watch all your favorite shows. I’m Mike Papantonio and this is America’s Lawyer where every week we tell you the stories that corporate media is ordered not to tell because of their political contacts, they won’t allow for it because their advertisers won’t let them tell these stories. Have a great night.