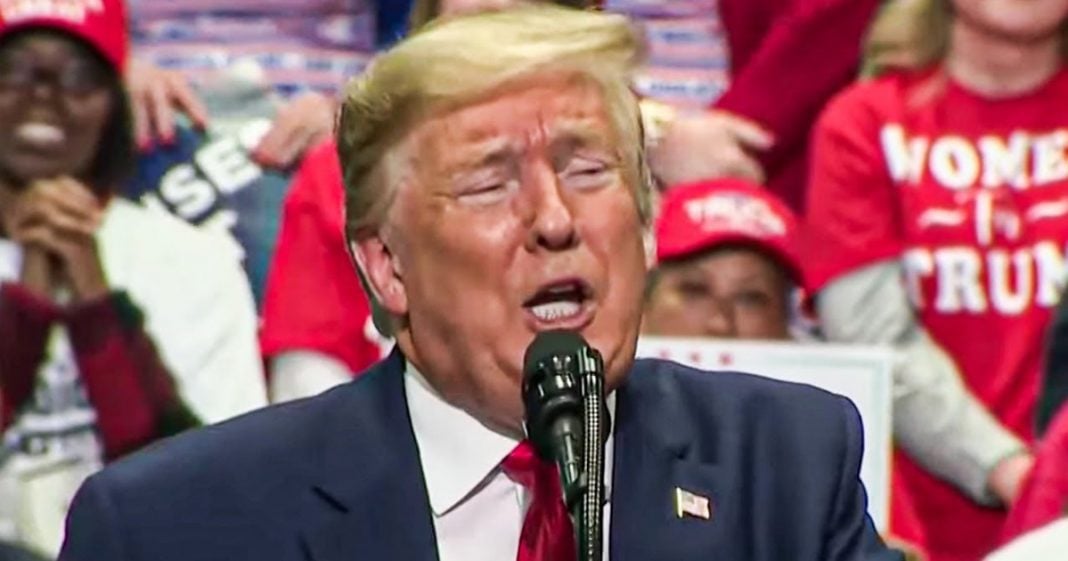 A shocking thing happened this week when Republicans finally found a tax cut that they weren’t in favor of passing. This would be the payroll tax cut that benefits businesses and could lead to cuts in Social Security that Trump has been pushing since before the pandemic began. Trump meekly blamed the Democrats for the failure of his plan, but the truth is that Senate Republicans were the ones who chose to not go that route. Ring of Fire’s Farron Cousins explains what happened.

And incredibly remarkable thing happened this week. And it’s remarkable for several reasons. What happened was that Republicans told Donald Trump, no, we’re not going to include this payroll tax cut that you’ve been pushing since the beginning of the year in the next round of coronavirus relief. This is remarkable. For two reasons, one Republicans finally stood up to Trump. He said, do the thing. And they said, no, we’re not going to do the thing. And the second reason this is remarkable is because the Republicans actually found a tax cut that they were willing to say, no, thank you. We’ve we’ve had enough. We, we don’t need another one right now. That’s crazy. Here’s what happened. Obviously, as I mentioned, Donald Trump has been pushing this payroll tax cut. Since even before the pandemic, he has been really hammering it during the pandemic as a way to boost the economy. When in fact it does nothing, uh, it puts a lot of money in the pockets of corporations and businesses puts a little bit of money in the pockets of the working class. It puts no money in the pockets of people who are unemployed or without work otherwise. And uh, Oh also it opens the door for Republicans to be able to cut social security.

That’s one of the reasons why Republicans have been okay with it in the past, but for some reason, right now they’ve looked at this and they have said he had it. We’ll put money in our donors pockets. It lets us fulfill our wish of cutting social security. But I’m sorry, Donald. We’re just not gonna do it right now. Why? Because unlike Donald Trump, every other Republican sitting in that Senate right there knows how to be a politician. They know how to play the game. They know how to put things off. And you know, for six months, because you got an election around the corner and you can’t do something to cut social security, a hugely popular program in the United States, three and a half months before a very contentious election where you’re already likely to lose. You can’t do anything to ensure that you do lose.

You. Can’t cut taxes for corporations at a time of growing income inequality. When elections are right around the corner. Now come end of November, December hell. Yeah. Expect to see them push this payroll tax cut faster than anything we’ve ever seen. They’re going to do it. They just know that politically they can’t do it right now. Right now, they got to put money in working people’s pockets. And that’s why we’re likely to get another round of $1,200 checks. Trump doesn’t care. Trump wants this thing done, but what’s interesting is the framing of the media. Now this was 100% Republicans standing up Trump and saying, no, we can’t do it. Now. Chuck Grassley was one of the people who said, no, this makes no sense right now. It’s not going to do us any good. It’s going to actually probably hurt us. And here’s the headline Fox news ran about this story. Trump says, he told Republicans dims. Wouldn’t allow payroll tax cut. We have to go onto the next thing. So Fox news on their website actually framed it as Donald Trump telling Republicans like, Hey Dems, aren’t gonna let us do this guys. So we got to move on.

It’s not even close to being what the reality actually is. Republicans told Trump it ain’t going to happen because it’s a bad political move. Trump did not tell them the Democrats aren’t going to go with it. So let’s just move on. That’s not how Trump works. Anyway. Trump has never a, okay, let’s move on. Kind of guy, not to mention the fact that we’re talking about the Senate, where Democrats are a minority. So who gives a shit if they were going to vote for it or not. Right? You have the majority, you would have gotten it passed in there and ask for the house yet. The Democrats control that, but they’ve also said nothing’s off the table. House Democrats are actually ready and willing to go along with Mitch McConnell’s plan to provide immunity to corporations. If they come down with a big outbreak of COVID-19 among their employees, Democrats have actually said with regards to that, we’re not taking it off the table.

So if you think you couldn’t have gotten them to vote for this payroll tax, cut your crazy. Just like the Fox news writers who wrote that headline. But the truth is a payroll tax cut is yet another giveaway to the wealthy and a Trojan horse to be able to cut social security because that’s what the payroll tax funds. I’m glad Republicans took it out, but do not think for a second that this is a permanent victory. It is a temporary victory and we will see that payroll tax cut come rearing its ugly head again at the end of November, regardless of who won the election.