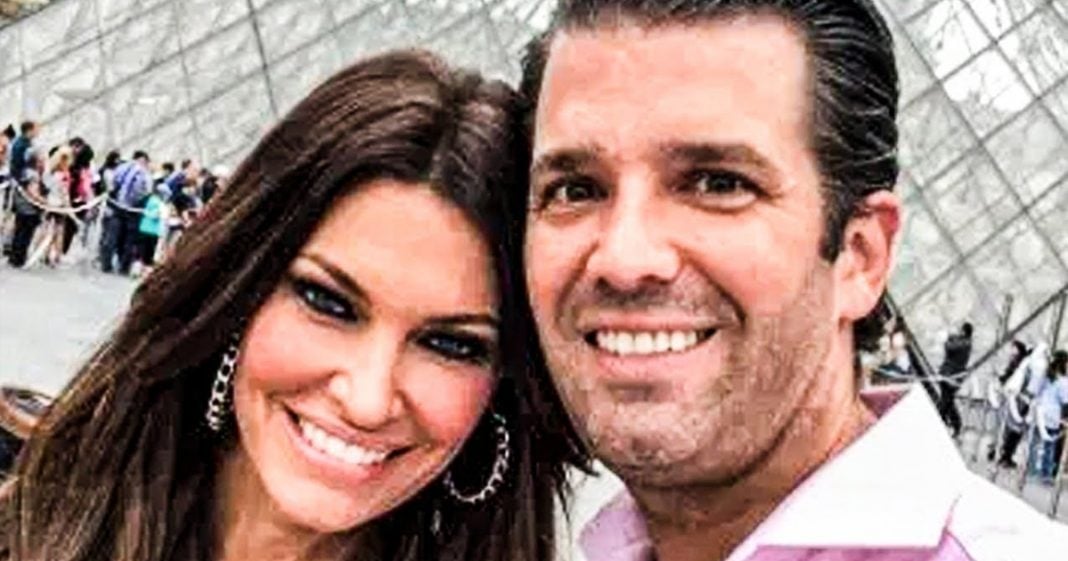 Kimberly Guilfoyle, the former Fox News host who is dating Donald Trump, Jr., has been put in charge of fundraising for Donald Trump’s reelection campaign. And according to a new report, it is going as horribly as you would expect for someone who has absolutely no experience in this area. Staffers are leaving and being replaced by friends of Guilfoyle who have no experience in either politics or in fundraising. Ring of Fire’s Farron Cousins discusses this.

Kimberly Guilfoyle the former Fox news host turned Donald Trump. Jr’s girlfriend was put in charge of a fundraising arm of the Trump reelection campaign several months ago. Now she’s not in charge of the big part, right? She’s not out there trying to get the big money donors. She is just trying to get those checks of up to $2,800, bundle those all up, get them back to the campaign. And according to a bombshell new report from Politico this week, she is doing a really, really horrible job of it. And not just in the last two weeks, since she was diagnosed with COVID-19, uh, thoughts and prayers, hope you get better on that. Now here’s the thing. The reason, the reason she’s doing such a horrible job with fundraising for the Trump reelection campaign is because she has no idea what she’s doing by the way. That’s not just me giving an analysis of that.

That is actually what her staffers have said in the last few weeks alone. She has lost several high ranking members of her team, including some of the only people that actually had any fundraising experience who were working for her, who requested to move elsewhere in the campaign because they just can’t do it under her because she is so incompetent. And because she doesn’t have a clue how to do what it is she’s supposed to be doing. Now, here’s the kicker. There was a meeting scheduled for last week where her staffers were going to meet with Donald Trump campaign manager, Brad Parscale to air their grievances with her and possibly get her kicked off the team or demoted so that they could finally do their jobs The way they’re supposed to.

Then Parscale got fired or reassigned within the campaign. So, uh, they couldn’t have that meeting. They couldn’t get her fired or transferred to a lesser position. So there she sits waiting, waiting for her body to overcome the virus, which again, uh, we don’t wish that on anybody. We do hope that she gets better. Uh, but as for the campaign fundraising stuff, I do not hope she gets better because this is hilarious because what she has done with this fundraising arm of the Trump campaign is a kind of a smaller scale version of what Trump has done with the entire federal government. She has put people in positions of power, on her fundraising team who have no experience. They have no idea what they’re doing. They’ve never worked in this field before, but dang it. They’re her friends or they’re the kids of donors. And so she put them in the power.

One of them is actually just a socialite that she knew from the New York city scene. And she gave them a job on the fundraising committee. One of them is the son of a wealthy Republican. So she gave him a job on the fundraising team. These people don’t know what they’re doing. Kind of like Donald Trump. He doesn’t know what he’s doing. He doesn’t belong in the position he’s in. And then he picks people who also don’t belong. Steve Mnuchin should not be running the treasury. Ben Carson should not be running HUD. Betsy DeVos should not be running the department of education wheelers. Shouldn’t be in charge of the EPA and so on and so forth. And that’s what Guilfoyle has done to this fundraising arm. And because of that, it has become completely dysfunctional. And his campaign is having to rely more and more on the fundraising efforts of the Republican national committee. And that’s fine. They’re still bringing in tons of money. They’re not bringing in quite as much as Biden, but they’re bringing in enough to keep the campaign afloat. But if Guilfoyle stays in her position for too long, she’s going to end up making the campaign too reliant on the RNC, which is eventually going to cost other candidates running for other offices as Republicans, a decent amount of money.