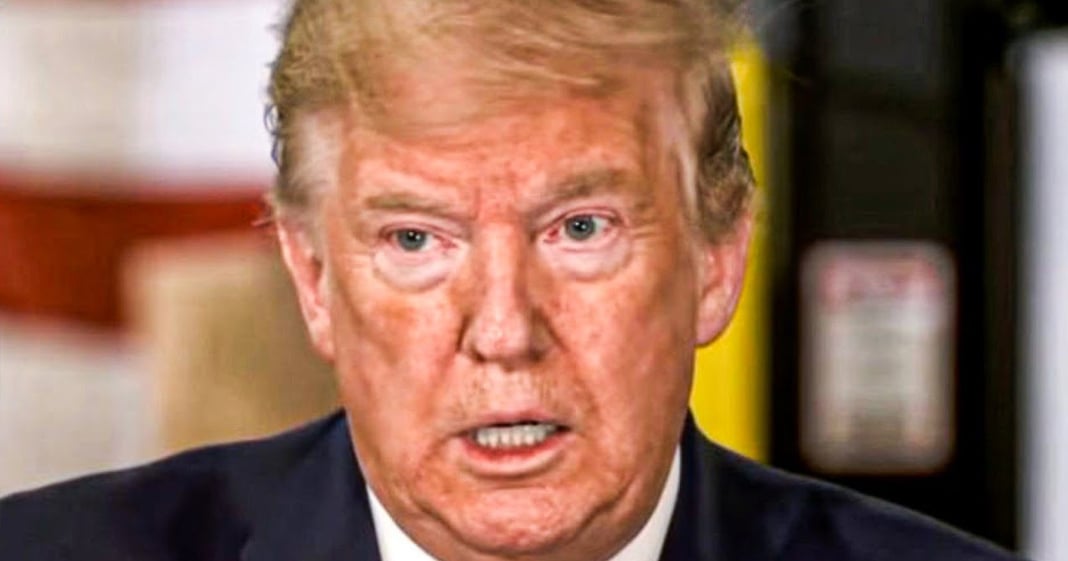 During a White House Coronavirus briefing this week, Donald Trump rattled off a list of groups that he chose to blame for the spike in new cases of Covid 19 in the United States. The list included groups like “Mexicans” and protesters, two groups that had absolutely nothing to do with the rise in numbers, and there’s evidence that backs that up. The rest of the groups could easily be attributed to Trump’s own policies, proving again that he is really the one to blame. Ring of Fire’s Farron Cousins discusses this.

Donald Trump on Wednesday during a Corona virus task force, press briefing. Even though there actually wasn’t a task force involved, it was just Donald Trump speaking to the press, but he swears that prior to coming out there, he was briefed by the task force. Uh, but nonetheless, he went out there and as he typically does refuse to take the blame for the spike in total number of COVID-19 cases that we’re seeing here in the United States. Totally not his fault. Uh, but he did tell us, by the way, who we can blame for this, we can blame quote Mexicans. We can blame those kids going out to bars. And of course, most importantly, we gotta blame the protesters. If it wasn’t for all those darn groups of people, man, we’d be sitting pretty right now here in the United States. So before I debunk everything this moron said, let me read you word for word exactly what he said.

Cases started to rise in young Americans shortly after demonstrations, which you know very well about which presumably triggered a broader relaxation of mitigation efforts nationwide and a substantial increase in travel. None of that is true. Actually. They’ve already looked into that and determine that these protests, these nationwide protests did not in fact increase the spread of the virus. They’ve looked into it. They did the tracing didn’t happen. This didn’t materialize. Why? Because most of those people were the masks. It wasn’t like those moron parades, where they were protesting the wearing of masks by not wearing masks and then spreading the virus. No, the black lives matter protest. Uh, those people have been really good about wearing masks. And so the studies that have already been done on it have said, no, they didn’t contribute to the increased spread. So you’re lying, right? They’re continuing increased travel on holidays, such as Memorial day, uh, you know, helped spread didn’t you, you, you traveled, uh, Memorial day.

You did, uh, you also a couple of weeks after that, you Trevor traveled to Tulsa and you traveled 4th of July weekend to Mount Rushmore. And according to officials in those areas where you traveled for your events number spiked there. So maybe you’re onto something there. Maybe it was because of the increased travel, but it wasn’t the increased travel of the average American. It was the increased travel of you bringing people to these events and not making them adhere to social distancing or CDC recommended mask and face coverings. Young people closely congregating at bars and probably other places, maybe beaches four or five different listed places.

Hmm. You know what that one you are correct about, except here’s the thing though, man, didn’t you didn’t you push for places to reopen. And that includes like bars and restaurants and beaches and whatnot. So I mean you’re right. That, yeah, they actually have said that that was one of the biggest factors of the increase is people going out and about acting the same business doesn’t exist, but you encourage that though. So that’s still on you, you know, you wouldn’t be seen wearing a mask until three, four days ago, whatever it was, you acted like this thing. Wasn’t a big deal. You continue to say that it’s eventually just going to disappear. You told places to reopen, to kickstart the economy, to get it moving. So you can’t be angry that these people went out to bars and restaurants, because most people aren’t paying very close attention to anything in the world other than their own lives.

We’re selfish people, unfortunately. So they think of a restaurants open. Clearly. That means everything’s okay. So they go there and they make stupid decisions, but that’s also on you because you pushed for it. And then here’s the kicker. God, this one pissing me off. We’re also sharing a 2000 miles border with Mexico. As we know very well in cases are surging in Mexico and all across the rest of the Western hemisphere. Um, yeah, you know what? Low bod they’re actually Mexico, still not as bad as us. And they saw what was happening here in the United States. And they actually shut down some of the ports of entry into their country so that Americans couldn’t come over there because we’re the diseased ones, right? We are the unwashed diseased masses trying to leave our country to make another country and Tucker Carlson’s words, dirtier and more infected it. Wasn’t Mexicans coming here. It was, it was us going up there. We’re the ones that are banned from entering other countries right now, bud, just the way it is. So you can blame Mexicans and protesters and you know, idiotic, Veo, drunken, college kids, all you want at the end of the day. Most of that’s not true, but all of it, no matter what is 100% on you. And that’s not just me saying that polls show that the majority, the vast majority of people in this country understand that too.