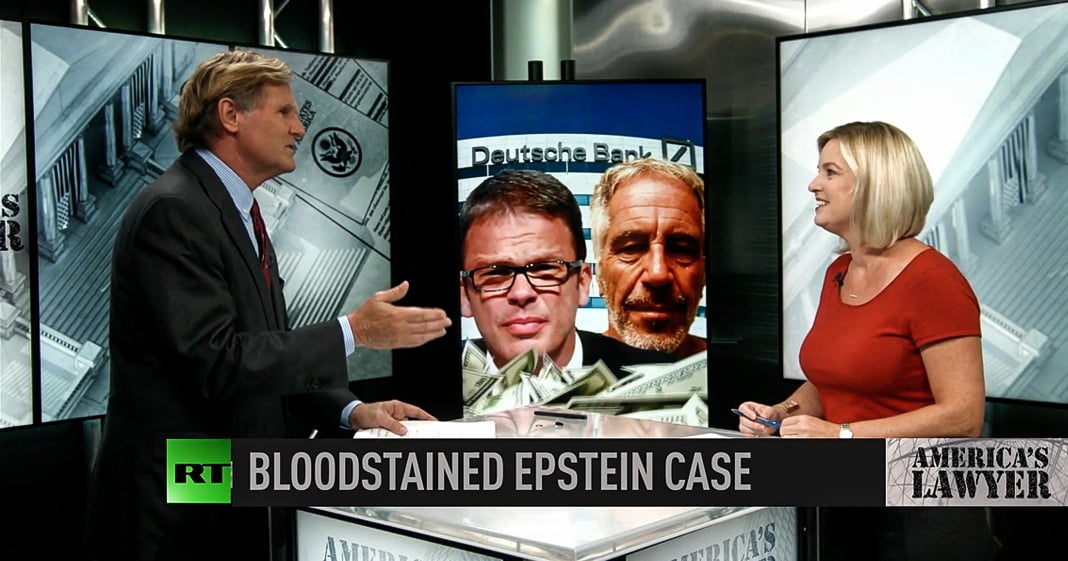 Mike Papantonio: Deutsche bank investors are suing the company and CEO for their financial ties to the late Jeffrey Epstein and just a days ago, the case was assigned to a judge who ended up, his family ended up being murdered.

Mike Papantonio: But you know what, has nothing to do with the story.

Mollye Barrows: And he’s a dead one.

Mike Papantonio: He’s a dead nutcase. So talk about it. But to me, it’s so bothersome when you see the media always trying to, trying to corner a story where it doesn’t belong. This is one of those situations.

Mollye Barrows: No, you’re exactly right. I think it boils down to clickbait. Anything to do with Epstein draws people’s attention. They want to know anything about him and what’s connected to it because it’s such a rabbit hole of who did he know? Did he blackmail people, this, that, and the other. So if they can take a high profile case like this, which had a loose connection, if you will, a tenuous connection to the Epstein case, I feel like that’s why the media went ahead and played it up.

Mollye Barrows: Of course it bothers me.

Mike Papantonio: I mean, I, it’s just to me, it’s incensing that nobody sits back and says, look, let me call balls and strikes here. This doesn’t have to do with Epstein. It has to do with a lawyer who was a nut job.

Mollye Barrows: Right. He was all over social media claiming to be a Trump supporter. Self-proclaimed anti-feminist who is supporting men’s causes. And in fact, authorities are now reporting that when they searched his car, they found the name and picture of another woman judge. So they don’t know if she was potential target as well, but it seemed like this guy was a loose cannon, walked up to this judge’s door, Esther Salas her son, 20 year old son answered the door. Her husband was right behind him. Both were shot. The son died. He, the attorney was dressed in a FedEx uniform. He took off and then later killed himself, shot himself in the head. And his name was Roy Den Hollander. And so the, you know, basically the investigation had zeroed in on him. They don’t think there’s any connection to Epstein, but initially the reports were, hey, this judge Esther Salas who had been assigned the lawsuit, this ongoing lawsuit against Deutsche bank just two weeks before she was shot. And that lawsuit has to do with investors going after the bank not having proper standards and allowing, you know, basically money laundering to happen. Like with Epstein.

Mike Papantonio: Deutsche bank, you know, there was this whole.

Mike Papantonio: It’s, it’s a, but here’s the point. This guy didn’t go shoot anybody because of Deutsche banker or Epstein. Look, my memory as I looked at these, at the background of this guy. He was, he was a big Trumpster. Hated, hated women. He must’ve hate, didn’t he have another picture of another female judge that he was going to shoot?

Mollye Barrows: That’s exactly right. They found it in his car.

Mike Papantonio: Okay. So, so we, we’ve got this character that just isn’t wired right. And he’s, he’s the same guy I think that sued CNN and MSNBC for their fake news. Granted, it is a lot of fake news, but the chances of him winning in a lawsuit was almost, it was inconceivable. So here’s this complicated character and rather than the media stepping up and reporting the news, they come up with their narrative.

Mollye Barrows: No, you’re exactly right and it’s irresponsible reporting. And it goes to show, when you hear stories like that, they haven’t done the vetting. They are trying to do what I call, click bait. Basically get as many viewers and eyes and, you know, because that’s how they make their money. If people are watching, if they can say we’ve got so many people watching or so many people following us online, then they can charge X amount for their advertisers. And you can tell a lot by the different news organizations of who’s doing that. Are they just running with any sort of claim that’s half-heartedly investigated just so they can get people talking about it? And it’s not credible journalism when you have real stories that should be investigated.

Mollye Barrows: Goodness. It was like in the mid nineties. I feel like I should mumble that.

Mike Papantonio: Yeah. Yeah, okay. So, so we had 24 hour news around, but when we have, 24 hours of news created what we’re talking about here.

Mike Papantonio: First out, how do you get out first? What’s your narrative?

Mollye Barrows: Yeah. And that’s the transition that I watched. When I first, I tell this story to people, when I first started, when I graduated college and started my first television job in 1996, it was cut your hair short, don’t wear no cleavage, no fitted clothing, no dangly earrings. You got to be professional. You got to walk, talk and act like a professional, like a man in a lot of ways. By the time I left that particular position, I still continued to report, but that Fox news business model of hot chicks and short skirts and fitted clothes was the model. And I was told you gotta wear fitted clothes. We don’t want facts and stories, and I’m not making that up. They wanted all person on the street reaction as opposed to.

Mollye Barrows: Taking the time to dig in because it’s a dying news model, your average, everyday nightly news. And so they, again, they just want people to watch. And if they can feed you what you already believe, or if they can hit these sensational little segments with a hot chick telling it to you or a handsome per, a handsome man for that matter. But what I’m saying is it’s definitely it’s icing on the cake as opposed to digging into dinner and telling people what they need to know.

Mike Papantonio: Right. They only corrected this, they got back on track on this story only after being shamed. That’s the only thing that saved them here.

Mollye Barrows: No, you’re exactly right. And that’s why it’s so important for people to be educated viewers. And maybe that’s a pie in the sky dream, but I think people have to have a little bit of responsibility on themselves to realize news is a business for most of these outlets.

Mollye Barrows: And they’re going to sell you whatever they can to keep you coming back for more. And if that includes myth juice and misconceptions, they have no problem with that.

Mike Papantonio: Mollye Barrows, thank you for joining me. Okay.