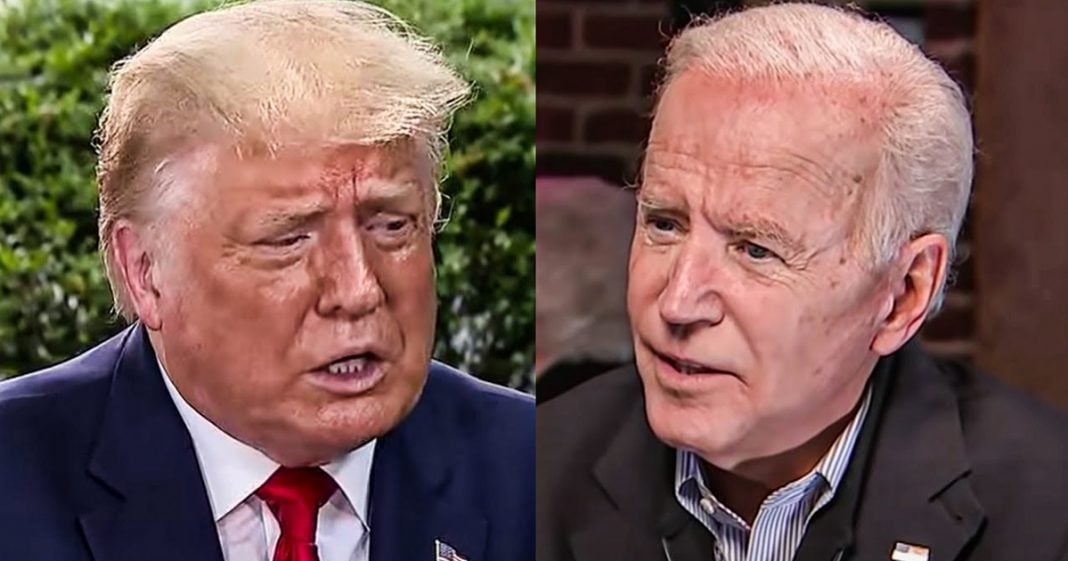 The version of Joe Biden that is being created by the Trump campaign is actually pretty awesome. They’ve claimed that he wants to ban all fossil fuels. They say he would ban religion and raise taxes on the wealthy. They are even claiming that he wants to de-fund the police. To put it another way – they are taking an incredibly centrist and corporatist Democrat and portraying him as…A SOCIALIST! Ring of Fire’s Farron Cousins explains what’s happening.

Nothing that any of these idiots has said is true. They all literally made it up. They all just made it up, but they’re claiming this because they’re claiming socialism, right? Joe Biden, the great moderate, the man Republicans would never think of calling a socialist they’re out there calling a radical socialist who could have predicted this aside from quite literally everybody who said that this is going to happen no matter who they put up. And that’s the truth. We have known this for quite some time in anybody saying otherwise it was being disingenuous because they wanted to push a more centrist candidate. Republicans have been calling every single democratic opponent, a socialist since 2008. At least that’s what it was kind of more widespread. 2008, every Democrats a socialist. It doesn’t matter if you’re a Joe Manchin fighting for everything Republicans believe in, or if you’re a Bernie Sanders actually trying to make life better for the working class.

Doesn’t matter. You’re all the same. You’re all identical. You’re all cut from the same cloth and every single one of you as a socialist. Now here’s the kicker. This America, or excuse me, this Joe Biden that they’re saying wants to convert America into this thing with no organized religion, no fossil fuels and higher tax rates. Um, hell yeah, not I enjoy paying higher taxes. Um, I actually am paying higher taxes under Trump that I wasn’t her Obama. So there’s that, uh, nevertheless, if I pay a little bit more in taxes, I expect to get more back. I would gladly pay more in taxes if it meant we had universal healthcare and that my healthcare wasn’t tied to my employer and that I had a $0 million copay at point of service, that would be pretty awesome. And according to all of the numbers, it would actually end up saving me money because health insurance is rather expensive.

A universal healthcare plan. Even if we get taxed for it, we would still have less money coming out of our paychecks than we currently do for our health insurance plans. No religion. Fantastic. We wouldn’t have these right wing evangelical freaks trying to push their religious agenda into legislation. They wouldn’t be telling women what they could or couldn’t do with their bodies. That would be a good thing. No fossil fuels. Fantastic. We are destroying the planet. We are so far behind the rest of the world in terms of renewable energy and energy conservation and hell even recycling, then hell yeah, let’s do that to this Joe Biden. The one that the Republicans are running against, I love this guy. Unfortunately, this person doesn’t actually exist, but here’s the good news for the Democrats. Joe, Biden’s making some strides. Are they great strides? Not necessarily. Are they decent in some areas?

Yes. His climate plan is actually pretty good, actually. Pretty good. I am proud of that. I am proud of him for moving to the left, but more importantly, I’m actually proud of Joe. Uh, Bernie Sanders, AOC, the sunrise movement, all of these people who have been pushing Biden further to the left, it hasn’t been a gentle push either. They have had to shove the hell out of him to get them to go left, but it worked. And that’s what we have to do. That’s how you inspire change. Not by packing up and walking away, but by sticking in it, digging in your heels and pushing and pushing and pushing. It’s not where it needs to be yet, but in some areas it’s actually moving more towards where we want it to be, but it wouldn’t matter if he was moving or if he wasn’t no matter who the Democrats put up, Republicans are going to call him a socialist. So if anybody ever tries to tell you that, to scare you out of supporting a certain Democrat, go ahead and call them an idiot and tell him to look at the last 12 years of moderate centrist, corporate Democrats being labeled socialist, because that’s the only thing Republicans know how to do.