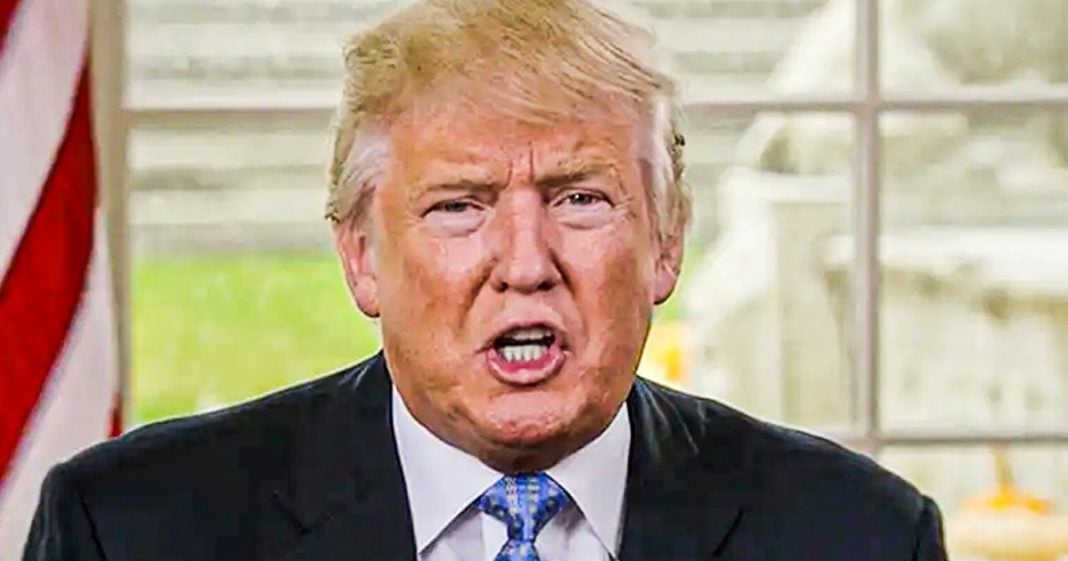 Donald Trump’s dream of having a big, packed-house Republican convention in Jacksonville, Florida is quickly falling apart, as law enforcement now says that there is absolutely no way they can have the proper security to run the event. They are short on both manpower and money, and they are running out of options. Trump’s convention is falling apart, and for the sake of Florida, let’s hope that the whole thing gets cancelled. Ring of Fire’s Farron Cousins discusses this.

It’s looking more and more likely that Donald Trump’s portion of the 2020 Republican national convention down in Jacksonville, Florida, uh, may not end up happening now, two weeks ago was reported that the RNC just couldn’t find enough donors willing to give money for that part of the convention to take place. Uh, what we had heard was the donors were already tapped out. They had given millions of dollars. I think it cost about $30 million for the part of the convention that they had already paid for in Charlotte, North Carolina, they can’t get that money back and they’re not going to get donors to give more money for something as ridiculous as Trump wants a crowd. And then a week ago it was reported that the Republicans were already going to scale it back because of the rising number of COVID-19 cases here in the state of Florida, they had decided that pretty much everything that was going to happen in Jacksonville was going to be without an audience.

They were however, going to have an audience for Trump’s speech, but now Mike Duvall or not Mike Duvall, excuse me, Mike Williams, the sheriff of Deval County, where a Jacksonville sits is telling us that this thing might not happen because he just can’t get enough cops there to actually do security now, Duvall himself, or excuse me, Williams himself, keep wanting to call them Duvall. Mike Williams himself. The sheriff is a Republican. So I’m sure he’s super excited to have this thing come to his city. But, um, he told Politico this week, quote, as we’re talking today, we are still not close to having some kind of plan that we can work with. That makes me comfortable that we’re going to keep that event and the community safe. Uh, it’s not my event to plan, but I can just tell you that what has been proposed in my opinion is not achievable right now from a law enforcement standpoint, from a security standpoint, I love the way that second part red light.

Let me just tell you from what I’ve heard from what these guys are telling me that ain’t happening from a security stand. You know, I mean, just from where I am sitting right now, they can’t do this. Here’s what essentially, uh, sheriff Williams had actually put out a call to every single County in the state of Florida saying, I need 2000 police. I need 2000 police to come to Jacksonville for this convention. At the end of August, he got 500 it’s all the state could spare 500 cops. So he’s 1500 short. Uh, that’s a lot, you know, when you’re asking for a hundred percent and you only get 25%, you’re falling pretty short. And especially at an event like this, where the president of the United States will be, this has to be the most secure place on the planet for that particular event. It really truly does cause love him or hate him.

You do not ever want something bad to happen to the president of the United States. You just don’t. We, we, we don’t do that. Okay. You have to protect him and you have to have the outside security, but here’s the thing too. It’s not just that. I can’t get these cops to come it’s there’s not money coming from the RNC to hire people, which is one of the drawbacks. That’s why you can’t hit that 2000 number. Cause it’s okay. Well, are we going to get paid as the private security? Yeah. They’re out of money. I told you about that earlier. Remember, can’t get the donors to pay for this. And that’s one of the things they would have to pay for. So what’s going to happen. We don’t know that’s the beautiful part of this. We don’t know. But let me tell you what should happen.

What should happen is that this event shouldn’t happen. Donald Trump is not going to get the convention balance that he thinks he is going to get from this. What he’s going to get are a couple hundred new cases of COVID-19 here in a state. That’s already one of the hottest hotspots in the country for it. That’s why this stupid thing needs to be shut down. If Trump wants to give a speech, do it online, you can do it from your bedroom, from your bathroom, from the oval office itself, you could do it from a car. You could do it from Mar-a-Lago from air force. One, wherever you think would look the coolest, but you could do it from there and you could stream it to every single human being on the planet, but don’t do it in person. You’re going to kill people. That’s the bottom line. Okay. Republicans should cancel. Democrats should cancel. There should be no concerns. [inaudible], it’s a stupid decision. That’s going to end in disaster. And this one in Florida is already ending in disaster before it’s even started.