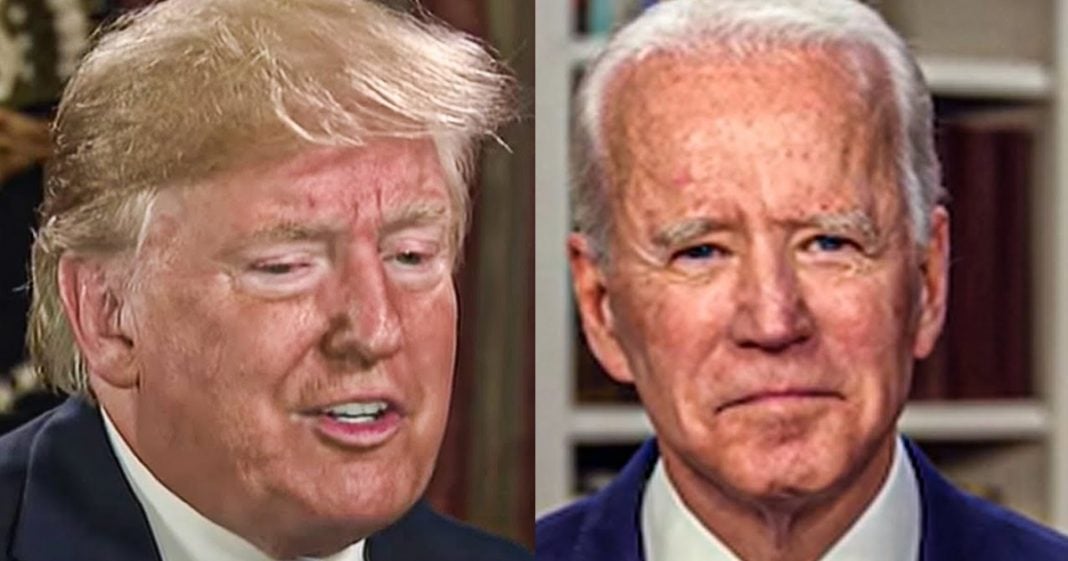 Donald Trump and his children thought that they had a slam dunk attack on Joe Biden when they began highlighting his mental competency. Unfortunately they forgot that people who live in glass houses aren’t supposed to throw stones, and it turns out that even the Fox News viewers believe that Biden’s mind is more sound than Donald Trump’s. Ring of Fire’s Farron Cousins discusses this.

Donald Trump has two themes upon which he is building his 2020 presidential campaign. The first one is, as we’ve seen him tweet out a dozen or so times law and order, unfortunately, over the past week, everybody’s learned that law and order actually looks more like full blown authoritarianism. And, uh, the kinds of things, basically that, uh, our media would show happening in other countries in order to get us to support invading that country, they would say, look, they deploy their own military on their people. Well, that’s what Trump did. That’s, that’s his version of law and order. And the public fricking hates it, You know, because it’s illegal.

But this, The second thing that he was running on a 2020 is Joe. Biden’s not all there mentally. And to be perfectly honest. Yeah, Joe, Biden’s missing a couple of steps these days, right there. There’s no question about it. If you say he’s not, then you’re either lying to yourself or you’ve spent the last four years in a coma in which case welcome back. And yeah, Joe, Biden’s not quite all there, but here’s the kicker. Neither is Donald Trump. So that’s why it’s been laughable when Donald and his kids go out there and attack Joe Biden for not being all there because Donald’s not all there. And that’s been on full display for three and a half years. But here’s the good thing about all this, the guy. Guess if you can say, there’s a good thing about having to choose between two presidential candidates who aren’t all there mentally.

Um, that’s terrifying actually saying that out loud, thinking about it right now. That’s horrifying folks. Those are our options. Yes. One is clearly better than the other Biden is in fact better than Trump. You cannot say that all they’re both the same. They’re not both the same. They’re not, Biden’s not great, but he is damn sure a thousand percent better than Donald Trump. Yes. That doesn’t make me any less of a progressive, mid admitting to reality. It just doesn’t. All right. Anyway, the public agrees with me, by the way, that’s the whole point of this. A new poll from Fox news of all places has come out and 47% of voters say that Joe Biden is mentally sound enough to be president of the United States. He couldn’t quite get half the country, but you have 47%. Trump only got 43%, only 43% of people in this country think that a Donald Trump is all there enough to be president of the United States. Now here’s where that number gets a little scarier. 39% said, no, Joe Biden is not all there. 51%. A majority said, no. Trump is not all there in this new Fox news poll.

That’s horrific. I don’t know You don’t disagree with them. By the way, Trump is not all there. He is not mentally fit to be president because I think when you look at both men, right now, it is clear and maybe it is just old age, not dementia, not Alzheimer’s just slowing down as they get older. That does happen to the brain. In addition to both of them clearly having at least that Trump also has issues kicking around in his head Said that psychiatry, Psychologists and mental health professionals have been warning us about, they think it’s almost in some of them say it is mental illness in addition to not quite being all there. So those are kind of our choices.

The guy that is missing a few steps as he gets older, or the guy who’s missing a few steps as he’s getting older and mental health professionals tell us we, he has a mental illness, um, either way not wonderful choices, but that’s what 2020 is giving us not really a lot of great choices and, uh, you know, ton of awkwardness, either way. The public understands that Trump’s attacks on Biden’s, uh, mental acuity. They’re not real. They don’t resonate with them. And Trump’s problems are far worse than any that Joe Biden might actually have.