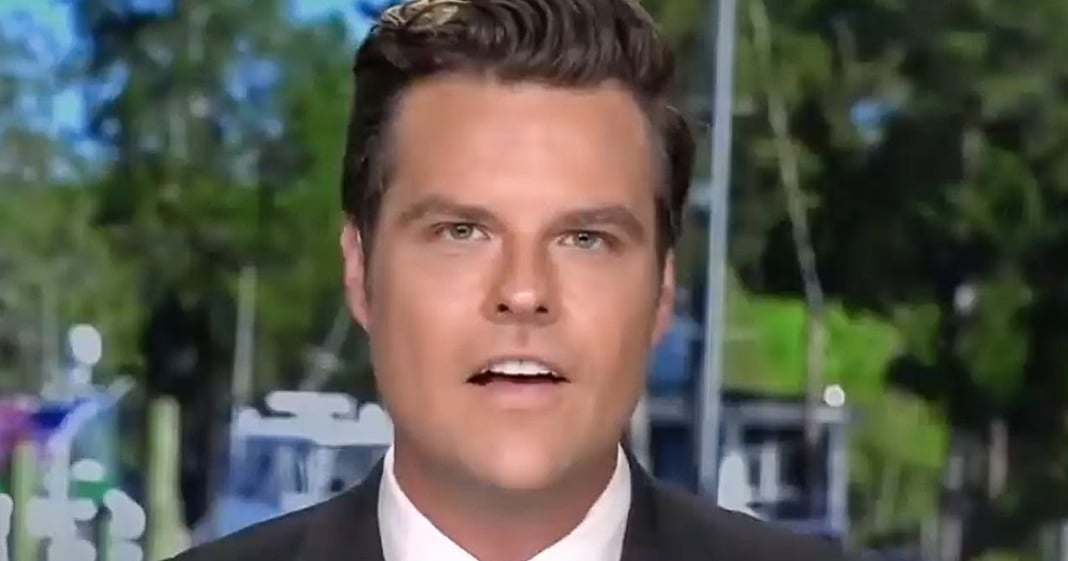 Republican Congressman Matt Gaetz is being accused of violating House ethics rules by allegedly misusing taxpayer dollars on a multitude of different projects. The first potential violation is the fact that his reports show he is funneling money to a private speechwriting consultant, which is strictly forbidden under House rules. The second is the TV studio that he built in his father’s house with taxpayer money. Ring of Fire’s Farron Cousins explains what’s happening.

Republican representative, Matt Gates found himself in a world of trouble this week after it was revealed through Politico report that he had allegedly misused, taxpayer funds to, uh, do a couple of personal things for himself. They are, there’s two big ones in this report. The first one is a, he allegedly hired a personal speech writing consultant, which is expressly forbidden by the rules of the United States house of representatives. You are not allowed as a member of the house to hire a speech writing consultant. And obviously you sure as hell can’t do it with tax dollars. You can’t expect the taxpayers to foot the bill for an individual representatives, speech writer, right. That doesn’t make any sense, but allegedly that’s what Matt Gates did, but this isn’t just any speech writer, by the way. This is a former member of the Trump administration, man, by the name of Darren Beatty, who was let go from the Trump administration after it was revealed that he had been attending white national catalyst rallies.

So totally racist dude, Matt Gates sees that he gets fired for being racist and says, you know what? I think that’s the kind of fellow I would like writing speeches for me. Smart move, man. Smart move. As one of your constituents here in Florida’s first district, I got to tell you that’s not ever what I want to see my representative do. And I hope you get removed from the house of representatives for doing that now on to the second issue. And this is one that believe it or not, we here at ring of fire might actually be kind of partially responsible for Matt Gates. Apparently built his own television studio because he just loves going on TV so much. And he did it in his father’s house, hired a private company to do it, use tax payer dollars to hire that private company for his own TV studio in his daddy’s house so that he, and pretty much only he could go on TV.

Uh, and I got, I got to read the rest of this. I got to read it directly from Politico, taxpayers, foot, the bill to rent the television camera and the private company that built the studio, which Gates refuses to identify takes a fee. Each time he appears on the air. It’s unclear how much it costs the private company to construct a studio. A, this may run a foul of the house gift rule, which prohibits any lawmaker aid and their family members from accepting gifts worth more than $50. Now, the reason I say ring of fire, my partially be responsible for this is because, um, believe it or not here in Florida’s first district, not a whole lot of television studios. In fact, for the longest time, there was only one, but then there was two. And that second one was us here at ring of fire.

We had the cameras, we had the equipment to be able to connect, uh, not via satellite, but via a fiber and Gates. His office would frequently request the use our studio. And we would always politely turn him down. Uh, we don’t typically like to rent out our studio to people. Um, so that’s the way we do. And a lot of times it would interfere with what we were already doing. We were using it. So we couldn’t accommodate Matt Gates. Another studio actually opened up an, a restaurant about two blocks away. Uh, and so Gates had been using that, but then he decided to make his own. So that’s why I say I kind of feel partially responsible for this. Uh, not that I’m saying we’re involved in any of his transgressions here because this does sound highly illegal. You use tax dollars to build a studio, a TV studio.

And I know because I’ve overseen the construction of at least three of them. Um, those are credibly incredibly expensive. Those aren’t cheap. The cameras that are required are not cheap. The internet connection that is required for an LTN or TV you device to connect to these networks. That’s not cheap either. The monthly fee on those is not cheap. This is costing a lot of money. And given the fact that you own the studio, technically it’s in your dad’s house, you frigging own it. Anyone charging a fee to use it, that’s insane. That’s insane. That is profiteering. That is in your dad’s house. He owns the studio, this warrants a massive investigation because Matt Gates is ripping us off. You know, this, I know that the TV studio business pretty well, cause I’ve been in it for quite a while. I know what it entails. I know where the payments go.

And I know for a fact that when somebody comes along and builds it after they build it, you pay them for it and they don’t get fees. That money is definitely going to his daddy has to be okay. Full-scale investigation is warranted here. If we can get Matt Gates out of office and back into jail where he should have gone years ago, maybe just, maybe there’s a little district where I’m sitting in sunlight, a little brighter on us in the future. I know we kind of, you know, we screwed up by giving everybody Matt Gates, but maybe we get some good investigators on this. We can finally write that wrong.