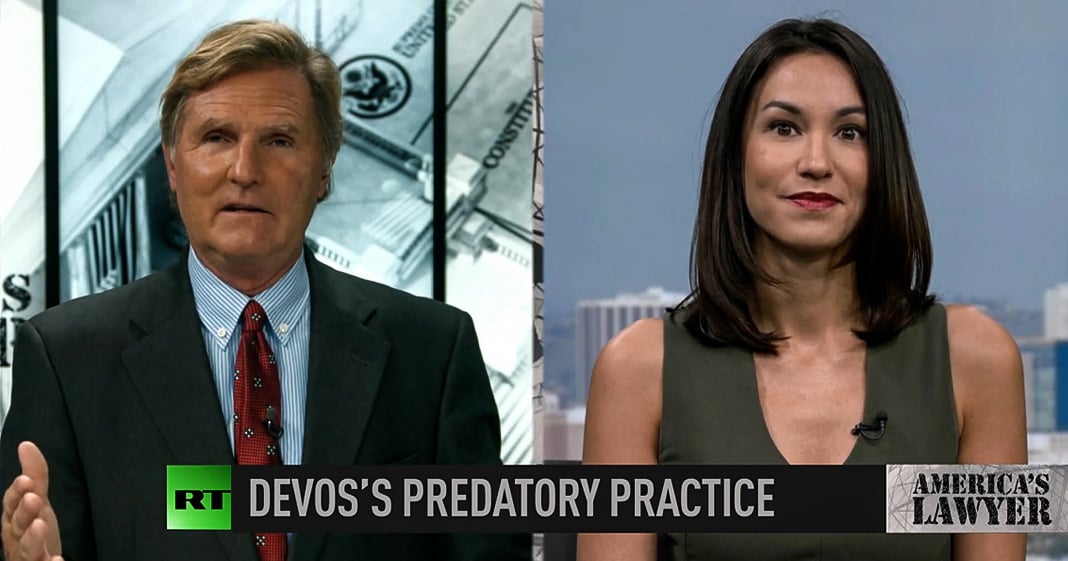 Mike Papantonio: Twenty-two state attorney generals have sued the US education secretary for siding with profit over school’s best interest. RT’s Brigida Santos joins me now with the story. Brigida, what States are taking Betsy DeVos to the court and let me, let me preface it by saying, you know, I don’t know how many stories in the last two months we’ve done on Betsy DeVos, but she is like a magnet for really ugly stuff. And I’m just wondering which States had the courage to say, you know, not on my watch. Talk to me about it.

Brigida Santos: Well, the lawsuit is being led by the attorneys general of California and Massachusetts with other AGs joining from the district of Columbia and 20 other States, including Colorado, Minnesota, Nevada, Virginia, New York and more. The coalition is challenging a 2019 rule rewrite by education secretary, Betsy DeVos, that makes it almost impossible for students who have been defrauded by for profit colleges to have their federal student loans canceled. The 2019 rule rolls back key Obama era borrower defense to repayment protections that offered students relief from federal loans that were borrowed based on the fraudulent, misleading or illegal claims of higher education institutions. Because students can no longer use violations of state consumer protection laws as a defense in their student loan forgiveness cases, predatory universities are now shielded from nearly all accountability.

Mike Papantonio: Well, there’s more to that story. I heard you talk about, you know, Obama came forward with an idea for it, but you understand that the backstory on that. The backstory is that you used to be able to take use bankruptcy court. If you were working, you were trying to pay it off and you just couldn’t pay it off, you had some protection with bankruptcy court. Well, Obama during his years as a Senator, voted against that and provided bankruptcy protection that closed the door for students to be able to have protection from these re, you know, from, from being dogged every day of their life to have this thing paid back. So there’s a lot more to this story than this surface. What scams have for profit colleges engaged in? In other words, the, they, they, they, they gauge, I mean, they, they engage in scams. Then the student comes out sometimes without a degree at all, and they still have to pay back this loan. That’s the typical kind of story, isn’t it?

Brigida Santos: Yeah. And there’s so many of these scams, but this lawsuit particularly highlights some of the scams by proprietary universities, including enrolling students in professional certification programs that actually lack accreditation that’s needed for students to obtain licenses in their profession when they’re done with school, while failing to disclose that information to students. It also outlines how the for profit school industry is prone to abusing it’s access to taxpayer funded title four aid, which these proprietary colleges heavily rely on in order to generate money. One reason the Obama administration implemented the 2015 rule after voting against it previously was because years of investigations exposed how for profit schools, including ITT tech, DeVry, Corinthian colleges, and so on, have long defrauded students out of that money.

Mike Papantonio: Yeah. So you see these advertisements. Can you draw this stick figure, if you are, you’re going to be the next Renoir. You probably want to come to our college and we’re going to get you this degree. And after we get this degree, we’re going to get you a job and you’re going to be making a ton of money. That was always the come on, come on and become a, become a nurse, come on and become a doctor’s assistant, become a paralegal and most of absolute scams. But nevertheless, at the end of the day, they had to, they had to pay those loans back. Talk about the victims of predatory colleges and universities. How is this new law really going to impact them?

Brigida Santos: Sure. Proprietary colleges target their marketing to veterans, the unemployed and people from low income and minority communities. They claim to offer accessible and career-focused degree and certificate programs to people who might not have the opportunity to enter traditional colleges, which have gotten only more expensive every year. Students choose these schools because they’re eager to learn new skills so they can successfully join the workforce and achieve the American dream. They’re really trying here. But if the gov, the government department that’s tasked with helping students allows private companies to continue to defraud them with impunity, society is absolutely going to suffer as a whole.

Mike Papantonio: Okay. So what happens is the justice department doesn’t do their job. They don’t prosecute for fraud. They should prosecute for fraud. They’re, they, they don’t do what they’re supposed to do and so the student gets sucked into it. DOJ is with the federal government, right? So then student comes through the program and the student says, look, I got to get, I can’t pay this loan and the federal government says, you know what? You’re going to be responsible anyway. It’s a terrible, terrible story for the student from beginning to end. Brigida, thank you for joining me. Okay.