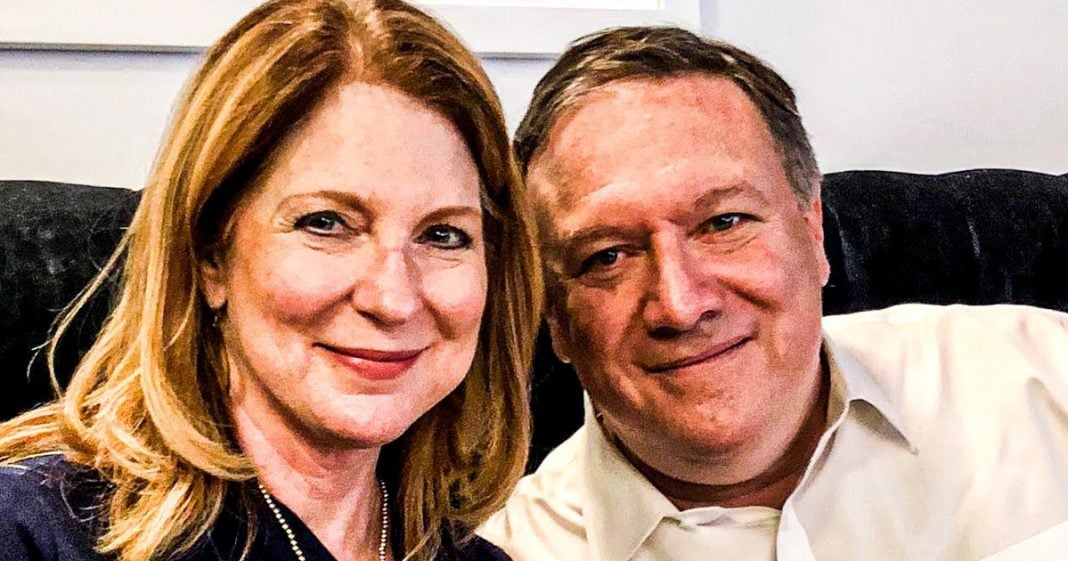 Secretary of State Mike Pompeo and his wife Susan Pompeo have been accused of grossly abusing both their offices and their staffs (and, of course, taxpayer dollars) in a bombshell new report that was released this week. According to the report, Susan played a much larger role in the schemes of her husband than previously thought, and the two could find themselves in serious legal trouble before this is all over. Ring of Fire’s Farron Cousins explains what’s happening.

Secretary of state Mike Pompeo made news briefly. Not that long ago when he fired the watchdog, who was actually looking into all of his abuses of power, his abuses of his staff. And of course his abuses of taxpayer money got rid of the guy. Trump said, yeah, go for it. I don’t give a crap. And a lot of things have happened since then. So we haven’t really been paying a ton of attention to Mike Pompeo, but luckily some of the actual journalists over at Politico did, and they found out through digging that apparently it wasn’t just Mike Pompeo that was doing all of these horrible things on taxpayer’s dime. Apparently his wife, Susan Pompeo got in on the action as well and has been in on this action since before Palm PEO even became secretary of state back when he was running the CIA, she was involved, got herself, a nice little office set up at the CIA’s building. Somehow had people that reported to her, even though she wasn’t a part of anything.

This story is beyond bizarre because this couple is beyond corrupt several times while mrs. Pompeo was working at the CIA, even though she is not a CIA officer, as far as we know, she was working there to help further her husband’s career. She was planning events featuring Mike Pompeo, uh, all on taxpayer dollar and one time a staffer actually brought up to her. Hey, uh, are we concerned a little bit about the ethics violations here? In fact, we actually have, uh, the email response that she said after the staffer asked shouldn’t we be concerned with the ethics. Her response was the ethics….question mark, question mark, question mark, question mark, question mark. Question Mark. Question. Mark. Exclamation point. That’s funny because I’m trying to get through the professionalism efficiency and morale standards in place. Then when we are in receipt of an email marked urgent, informing that the congressmen, we are all supposed to be, uh, unencumbering from tasks, so he can better serve. America is digging through trash. Doesn’t deign more than a, we will get around to it response.

So that’s her response to that? That is, that is incoherent. Um, doesn’t really apply to anything that the staff are actually asked her about with, in terms of, you know, we’re, we’re violating the ethics rules. Should we be worried about that? And she’s like, I got a congressmen digging through the trash. Cool, cool. That’s a that’s real cool. Susan. Nobody asked, nobody asks about the Congressman digging through the trash. Um, but what we do have are some serious ethics violations. Um, here’s a list. I don’t know if you see this as a close. So these little tick marks each one of these is a different incident that either Susan or Mike or both were implemented in, um, in this new report, you can find the link in the description of this video. I do have to list just a couple. Um, Susan Palm pale, allegedly had staff members who worked for her husband on taxpayer dime, a Walker dogs pick up dry cleaning, which we knew about the pickup, dry cleaning and watching the dogs thing from, uh, Mike Pompeo himself. Apparently the wife was in on it too said, Hey, you get that dude to walk our dog. Great. Hey, do it again, go walk my dogs, go get my dry cleaning. Your apparently all my personal staff, even though you’re, you’re being paid with tax dollars. Um, and this is a huge ethics violation, but again, no time for ethics violations when you got congressmen digging through the trash, right, right. Palm PEO family.

Oh, I guess the Congressman was her husband. I mean, she doesn’t necessarily explain that back when he was in Congress. I don’t know why he’s digging through the trash. Uh, very weird. But, uh, anyway, um, during your husband’s time running the CIA early in the Trump administration, Susan helped plan his external advisory board events briefings and played a hands on role in his overseas trips. Um, during the 2016 campaign for Pompeo’s house seat and aid was assigned to dog set back in Kansas on unpaid time, another aid was told to put the newspapers inside of the Pompeo Wichita home while they were out of town. Susan organized, they September 27 dinner during the UN general assembly in 2019, ostensibly for foreign officials from Pacific islands, but included spouses of officials from Egypt, Algeria, and Azerbaijan, uh, food for that event, cost taxpayers, at least $1,000.

Um, just had staffers redo plans for new decor and Pompeo DC house office, all kinds of stuff. I mean the, the, the lady, the man, they’re all using this staff as if it’s their personal assistance. These are people who got jobs in government because they wanted to work in government. These were people who thought I can, I can make a difference in the world. I can be one of those people working behind the scenes, you know, seeing how the sausage is made. Instead they’ve become interior decorators, they’ve become professional dog walkers. And one unfortunate soul became a newspaper gatherer. That’s what happened. Those may seem small. They may seem innocuous, but those are abuses of power. They’re abuses of staff and their abuses of taxpayer money. That is what the Pompeo are very clearly guilty of. And we know this administration is not going to hold them accountable for anything. So we just have to hope that the next one will.