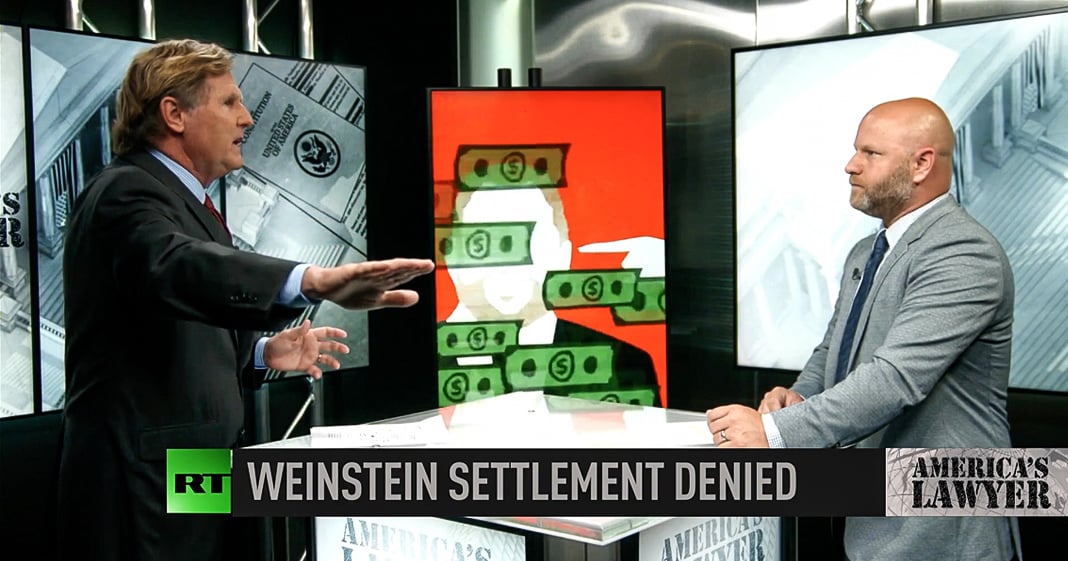 Mike Papantonio: A judge last week throughout a proposed settlement for Harvey Weinstein’s victims and thank goodness he did. Well, you know, I gotta tell you, as you know, I have always fought, I don’t do class actions. I handle mass tort cases, but I do trial, I go to trial and I actually try cases for people. Class actions have become a device that corporations use. They’ll go hire some bottom feeding lawyer. Okay. This bottom feeding lawyer will file a class action and all the while they’re negotiating with the bottom feeding lawyer to work out this sweetheart deal. The Weinstein case reminds me a lot of that.

Farron Cousins: Yeah, absolutely. The, the class action they wanted to put together 25 million, for God knows how many victims of this man, but it also included people who were never technically victimized. You know, if you were a woman and you worked for Harvey Weinstein in any capacity, you suddenly became eligible for this. And by the way, 12 million for Weinstein’s lawyers and their legal fee.

Mike Papantonio: Yeah. Talk about that.

Farron Cousins: That is insane.

Farron Cousins: Well, it makes you wonder whose side that lawyer actually was on because you don’t negotiate as part of a class action settlement fees for the other person’s attorneys, especially not to the tune of $12 million, half the settlement was for him.

Mike Papantonio: Okay. So, so the attorney’s freaked out because the Weinstein organization declared bankrupt. Okay. We see it all the time.

Mike Papantonio: But here’s how it really works. Just because they go into bankruptcy, into reorganization, doesn’t mean that you’re not going to have royalties coming in from all of those movies for years and years and years. So there’s more money there. And these people have a better shot, honest to God. They have a better shot making a bankruptcy claim that’ll be going on for a long time than they would with this deal that they tried to cram down these people’s throat. This judge, I really love this judge. What is, what is his name?

Mike Papantonio: I, I love this guy. He started asking tough questions. He said, wait a second, wait a second. First of all, how do you treat a woman who’s been raped the same way as somebody, you know, somebody who has just been a victim? Maybe been verbally abused, but that’s different from a rape. And so he starts looking at this, this is a garbage settlement, is what, you know, basically what he said.

Farron Cousins: Yeah, you, you can’t the class, the whole point of a class is that everybody has a identical or at least very, very similar injury.

Farron Cousins: And there is a world of difference between a rape and somebody who witnessed a woman get verbally harassed. Because that’s what some of these were. They weren’t even themselves harassed, but they did witness harassment. Those are not the same. And the judge pointed that out very clearly. He said, there are different classes here, but you cannot put them all together. But I think it was, it was a lot of the 12 million for Weinstein and his lawyers that the judge said this, this doesn’t even make sense.

Mike Papantonio: Sometimes. Okay. First of all, there’s, there’s about a hundred women involved in all this. Very, you know, this, this pig, absolute utter pig Weinstein, victimized more than a hundred women in one form one way or another. And so this judge I think sees, he looks at this, at this agreement and he says, wait a second, this looks an awful lot like it’s being driven by the insurance company. It looks like you’re willing to cave in because the insurance company’s pay you whatever the deal is on, not the 12 million, but whatever the deal is in addition to that fees wise for the lawyers and we’re seeing this more and more Farron. We’re seeing it with a corporation. We saw it with the Roundup case, you know, with the Roundup case was, was virtually over and we saw, you know, some, some things take place that were kind of suspect. Farron Cousins, thank you for joining me. Okay.