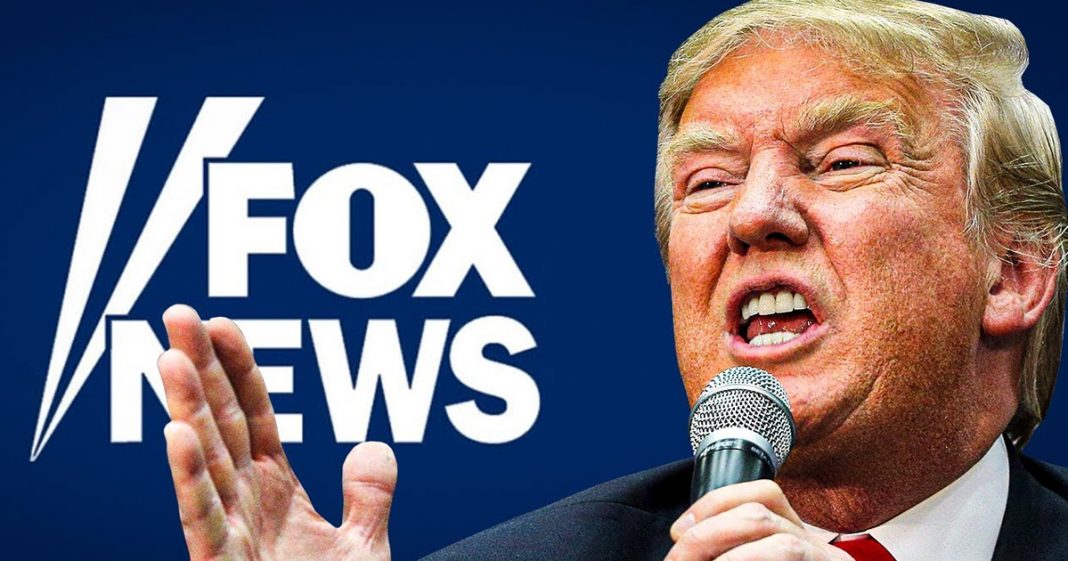 Donald Trump’s poll numbers continue to get worse with each new poll that comes out, including the ones from Fox News. And every time a Fox poll brings bad news, the President seems to freak out more than normal. The latest poll shows Trump losing to Biden by large margins in swing states in the Midwest, and if Trump can’t pull out a victory there, he can’t pull out a victory at all. Ring of Fire’s Farron Cousins discusses this.

Donald Trump is no stranger to bad poll numbers. In fact, his entire administration, uh, pretty much since day one, actually pretty much before the election ever happened has just been bad poll numbers. Uh, but in the last couple of months, he has seen his poll numbers reached levels that even the most ardent critics of this administration never thought we’d see. And for the most part, Trump likes to write them all off his fake news, right? Uh, it’s the ones from Fox news. However, that really do seem to sting him the most. Every time Fox news comes out with horrible poll numbers for him, he attacks them, he attacks their pollsters, says what’s happened to this network. You guys have gone downhill. Everybody go watch the own network instead. Uh, and we’re about to get another one of those massive meltdowns, most likely cause Fox news yesterday came out with a bunch of new poll numbers that show Donald Trump losing, losing by very, very large margins in, uh, several vital swing States in the Midwest and, uh, Northeast those States by the way, happened to be Michigan, Minnesota, and Pennsylvania.

Let’s start at the Michigan. Michigan is a state that Donald Trump won. Michigan has been a huge focus over the last few years, not just for the water crisis in Flint, Michigan, but for manufacturing jobs here in the United States. It’s a pretty decent kind of a barometer as to where the country is as to where manufacturing is as to how healthy the actual economy truly is. And you look at Michigan over the years and it has not been doing well because the overall economy is actually not as healthy as, uh, you know, we had been told with all those great numbers from both the Obama administration and early days of the Trump administration, wasn’t that strong because manufacturing is leaving still has been, Trump’s done nothing to fix it. Uh, so Biden’s pulling ahead. Most voters in Michigan trust Biden more on the issue of the environment. They trust him, uh, to handle the pandemic. They trust him on environmental issues. They overall trust him and they do not trust Trump.

So that’s very bad. Again, Trump won Michigan. One of the States that pushed him over the top with the electoral college. So here’s where that one stands. Uh, he’s beating Trump by nine points, 49% to 40, 30%. And this one was a state that Donald Trump won by less than half a point, but now he’s losing it by nine points. It’s so yeah, I imagine he’s probably going to freak out about that Fox news poll. Uh, another part of the poll, as I mentioned, Minnesota, now, Minnesota is a state that Trump did not win. Uh, back in 2016, Clinton pulled off a victory there, small margin of victory, but Biden has a 13 point lead over Donald Trump in the state of Minnesota. And let’s not forget folks that is the home state and the manufacturing base of Donald Trump’s good friend. Mike Lindell. The MyPillow guy is Minnesota. And even his influence, you know, big pillow cancer overcome Biden’s lead in the state of Minnesota, but the big one, the big prize, the biggest electoral prize up there, that’s actually up for grabs along with Ohio, Pennsylvania. So drum roll please. What’s what’s the margin what’s Biden winning by 11 points.

Joe Biden is beating Donald Trump right now in the state of Pennsylvania, 50% to 39% Pennsylvania along with Ohio and Florida are the three most coveted swing States in the United States. Biden is winning in all three. He has the smallest margin right now in Ohio. He’s pulling out ahead in Florida, uh, by more than five points. He’s winning Pennsylvania by 11 points. He’s winning Ohio. The last poll I saw, I think was one point, uh, other polls have them in about four to five points, winning Ohio, most recent ones, only about one point. So that one could be the outlier since all the other ones are about four or five points. This hold steady. We’re going to see the largest electoral landslide in our lifetimes. Trump doesn’t have a leg to stand on. He is losing every single swing state in the country right now. So yeah, this is going to piss him off. And since it’s coming from Fox news, it’s going to piss him off twice as much as if it would coming from anywhere else.