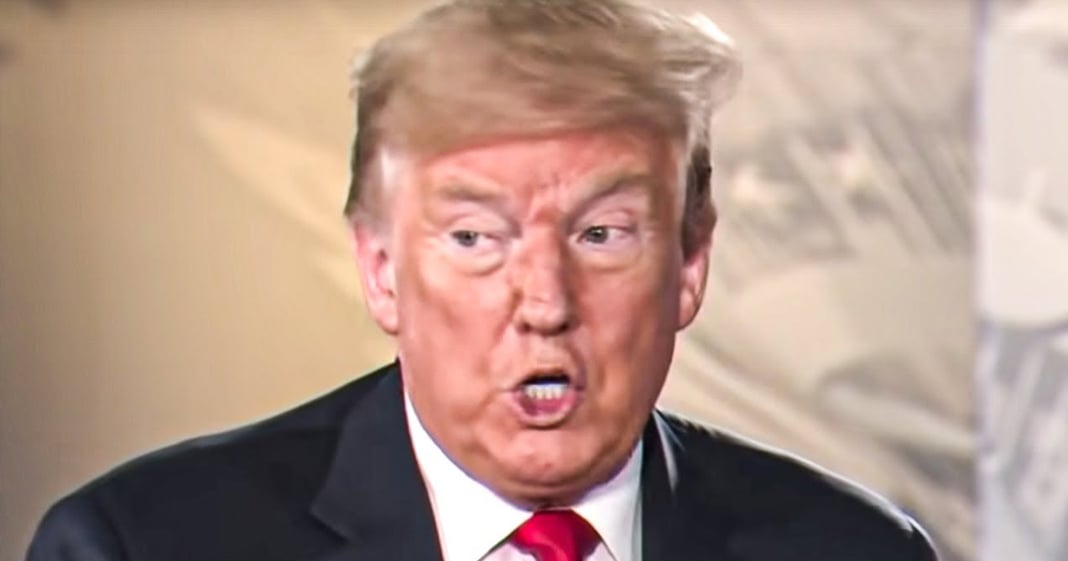 Donald Trump is STILL bragging about “acing” his cognitive exam, but the more the public finds out about the test, the more panicked they are becoming. The test is very easy to anyone that isn’t suffering from any form of dementia, and it certainly contains nothing worth bragging about. The public at large is alternating between mockery and panic as the President keeps insisting that he has a good brain. Ring of Fire’s Farron Cousins discusses this.

Donald Trump will not stop bragging about the fact that he a past or, or in his words, he aced the Montreal cognitive assessment. Uh, almost two years ago in the last few weeks, this has become a major talking point coming from Donald Trump, because he is trying to separate himself from Joe Biden, who he says could not pass the Montreal cognitive assessment, but he, on the other hand, aced it so well that the doctors were just shocked. They were shocked that the president didn’t have dementia. That alone is a terrifying thought, by the way, like Holy hell, I really, really thought there was something wrong with your head there, but I guess I was wrong. The doctors say to Trump, that’s horrible. You don’t ever want somebody saying, wow, damn. I thought you had dementia to the president of the United States. The guy with the nuclear codes of all the people on the planet.

That’s the last person you’d want to see have dementia on Wednesday. Trump went back on Fox news after going on there a few days ago with the, uh, Chris Wallace interview that aired on Sunday. And he, once again starts bragging about passing this test. Cause cause Wallace called him out on it. And Fox actually showed part of the test on the screen. And it was the part where it had the picture of an elephant, had a couple other animals on there. It’s like, dude, do you know what these are? Do you know what this animal is? Um, quite literally to be honest, um, cause I’ve had many kids go into kindergarten and they do a little assessment of them prior to going into kindergarten. And one of it is, you know, can you count by fives all the way to 100 Donald Trump’s cognitive assessment? You had to count backwards from 100 by seven. Okay. A little more difficult than counting by fives to 100, they did show pictures of animals. Do you know what these animals are? Just like the Montreal cognitive assessment that Trump’s has. But then, then Trump said on Wednesday during a Fox news interview, then things got a little tricky, right? It’s not all pictures of animals and counting numbers. It’s remembering a series of five words. The doctor said five words and Trump had to repeat them back in order.

This is bragging about, this is backfire. I am so sorry. I can’t keep it together. His talking points here are backfired. That’s what’s important. Sorry, I’m trying to hold it together here. But this man is insane. The public is actually starting to have the same kind of reaction that I’m having now, which is, are you kidding me? Are you really sitting there saying that nobody in the history of the Montreal cognitive assessment, which by the way, Trump can’t remember the name of the test. Either he’s sitting here bragging about his memory and he can’t tell you what the name of the test was. Anyway, it’s five words were fine. And he says he is the only one that’s ever done that folks. This man is sir.

I think, yeah, You have to take the test again. And I think he should do it on time. I think that’s what needs to happen because the public right now is not sold on it. The more he claims that he is the best and brightest person to ever take this test, the more panicked the public becomes, the more mockery they direct at the president. And it’s kind of Teeter tottering right now between let’s make fun of him. Let’s laugh about it. And let’s be freaked out because this man has control of the nukes. That’s not a position any of us want to be in, but we are in that position because the presidents of the United States, the president of the United States, excuse me, there. Uh, the president is crazy. And I don’t think at this point that there’s any other way to say that other than there is something clearly wrong with this man, and he is lying through his teeth, you don’t get extra credit on a cognitive exam. That’s not how doctors test. He needs to be removed from office immediately because he is clearly mentally unfit to hold this.