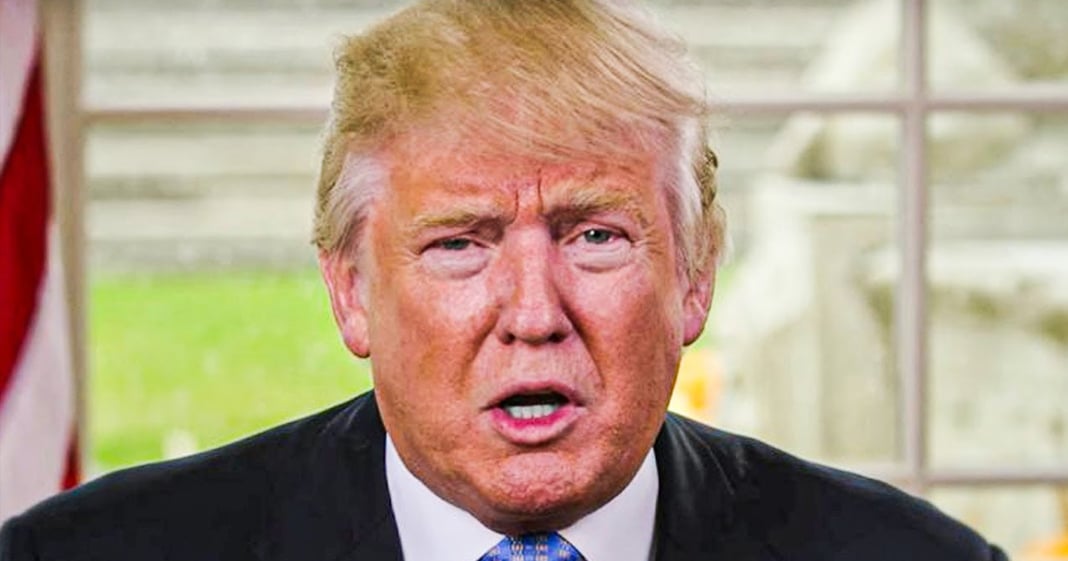 According to reports, Donald Trump has once again abused his power by asking an ambassador to secure the British Open for one of his properties. This proves that the man is incapable of putting the interests of the country first because he always (only) thinking about how he can profit off of his position. Ring of Fire’s Farron Cousins explains what’s happening.

When Donald Trump isn’t out there violating the us constitution, sending us troops to go spy on and essentially attack and disappear American citizens. He’s also out there trying to enrich himself through the office of the presidency. And another story emerged this week, showing exactly how that happens. Apparently back in 2018, Donald Trump asked then ambassador to Britain, Woody Johnson, To do what he could To get the ball rolling. If you will, uh, to move the British open golf tournament to Donald Trump’s golf course in Scotland Turnberry, the one that he purchased in, I think 2014, that is what he had an official us ambassador working on in his official capacity as an ambassador being paid by tax dollars to work out a business deal for the president of the United States.

According to the report, Trump in 2018, reportedly asked the U S ambassador to Britain, Woody Johnson, to see if the British government could help steer the televised event to the money losing course bought by the Trump organization. In 2014, Johnson reported the ignored ethics concerns raised by his then deputy Louis Lukins and floated the idea with the secretary of state for Scotland, David Mondell per the New York times Lukins later reportedly flying the request with state department official. He was later forced out of his role at the U S embassy in London after telling a positive anecdote about former president Barack Obama during his speech.

So, uh, Lukens his superior at the state department says, yeah, dude, that’s, that’s like pretty unethical for you to go and speak to Scotland about it and what he Johnson says, ah, I’m gonna do it anyway. And then Lukens during a speech apparently says, Hey, Obama, not such a bad guy. So they fire him, but they keep the guy who violated ethics rules to try to get that golf tournament to Donald. Trump’s a money pit of a golf course over at Turnberry. In fact, the only thing that turned Turnberry around was the fact that the U S military has been forced to redirect their flights so that, Oh, we got to stop in Scotland. We got to stay at a hotel, I guess it has to be Turnberry, even though that’s so much further away than the other hotels. That’s a report that came out earlier this year.

Uh, we discussed that most members of the media discussed it because it’s disgusting, but that is what the president is doing. And here’s the kicker folks, literally nothing we can do about it other than vote them out because, and I didn’t know this too right now, but apparently the president of the United is immune from conflict of interest laws. It’s fascinating, isn’t it? Right? Uh, most powerful politician on the planet, arguably, uh, definitely most powerful person in the United States. And for some reason that particular law doesn’t apply to them. Now it applies to everybody else, even the underlings, you know, people who don’t have nearly as much power. Uh, and so they can’t abuse as much power as the president, but the president does this. This is insane. Our country was founded by morons like morons wrote these laws. I’m sorry. I know we’re not supposed to ever talk bad about the founding fathers, but these people sucked go back and actually look at how they lived their lives and who they were and what they did. These are pretty crappy people. Yeah. They created a country. Fantastic.

I like this country. It has a lot of work to do before it’s decent. And a lot of that has to do with the way these idiots back then wrote these laws And the way laws have been written ever since basically we’re, we’re not that great. We could be, but we’re not. And as long as we allow the president to act like he doesn’t have to ever face any consequences. And as long as we write laws to say that, Oh, by the way, mr. President, these apply to everybody. But you know, this can never be a real honest to goodness Republic. It can’t be an honest to goodness democracy. It can’t be a democratic Republic. It could only be a little bitty form of a dictatorship. The president can never be above the law. What applies to me has to apply to him as well. And if it doesn’t, there’s always going to be an imbalance of power. And that is always going to lead to corruption.