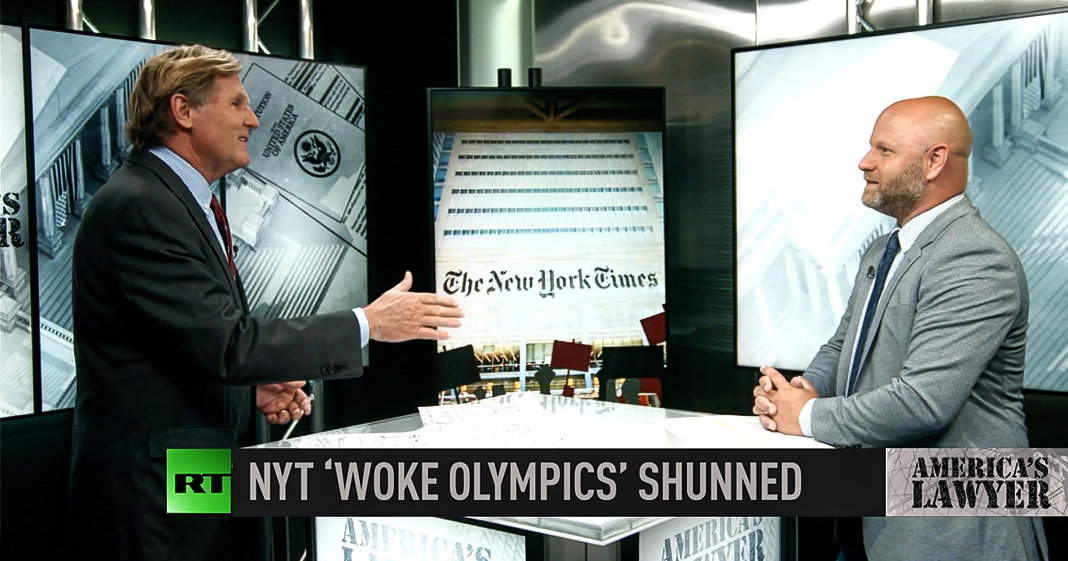 Mike Papantonio: New York Times opinion columnist Bari Weiss caused a big stir last week when she suddenly resigned from the paper and accused them of being too woke to function. Joining me to talk about this topic is Farron Cousins, editor of the trial lawyer magazine. You know, I gotta tell you something I’m on her side on this one. It’s just, this, this is becoming so disturbing. I describe, I describe the New York Times right now is a scene out of home alone. The kids are in charge. Experienced editors and journalists are shamed. They’re, they’re harassed if they really try to be journalists. Now she’s got some other issues, but this woman was right. What she wrote about this paper is absolutely correct.

Farron Cousins: Well, you know, Weiss says that the, the opinion board a little too woke for her, and she did accuse them, you know, they, they, they’ve got this young way of thinking. But if you look at the New York Times editorial board for just the editorial, most of these folks are well into their golden years, or they’re almost there. These are not a bunch of young kids. You know, if they’re suffering from woke culture, it’s just, I think decades of experience saying, hey, this is how the world is now. And, you know, maybe, ms. Weiss, wasn’t, you know, evolving enough. But at the same time, the New York Times is garbage. Like she’s right about that. They’re a horrible paper. I just disagree with her on the reasons why.

Mike Papantonio: I mean, you know, I was a journalism major at university of Florida. Very, I was news editing major. It’s a tough major. You gotta work to make it through there. It used to be, we studied the New York Times and we’d say, well, this is how you, I wouldn’t touch this newspaper right now. Look, let’s back up on this story just a little bit. She there’s no question, she had written some material about the rise of antisemitism, right? And they thought the, these, these kids, now you call them what you want. When you really look at who was pushing this agenda, might’ve been some old folks saying yes, because they didn’t want to get harassed. They didn’t want to get bullied. They didn’t want to get intimidated by these home alone kids who are running the damn newspaper and it’s become a train wreck. So, so she she’s talking about the rise of antisemitism and some folks on there say, well, what about Palestine? You know, you’re not treating the Palestinians, right. So they’re critical of her. This mob mentality has taken place at the New York Times. Just like it has in media, across the world right now Farron.

Farron Cousins: Well, Bari Weiss though, on the other hand too, has a bit of thin skin. And she does have a history and this is evident in her Twitter feed, Glenn Greenwald has talked about it ad nauseum, anytime somebody criticizes her criticizes a point she makes, she immediately goes to that you’re an anti-Semite. That is her fallback argument. She can’t substantively argue her points.

Farron Cousins: Which is a drawback. But again, at the same time, part of what makes these editorial boards great is that they present differing opinions. And if you don’t like what one of them wrote, somebody’s going to come along and write a counterpoint to it. That’s the point of this part of the paper.

Mike Papantonio: You, you really did. You had a really solid education. Matter of fact, you came to work with me when you were what, 22, 21.

Mike Papantonio: 21 years old. And I recognized back then you had a great solid education, and I’m sure you studied John Stuart Mills, just like I did. And John Stuart Mills, who wrote the most important book on Liberty said this, that he wouldn’t even call it group think back then. But he said, there’s a really, the, democracy relies on rich diversity. So you may not agree with him. You have a right to shout, but you don’t have a right to shout them down and saying, you can’t say this. What we’ve become is this group, I mean, we’re social intolerance. We were handcuffing the truth. We, we, what what’s we, we can’t even adapt, we can’t even adapt to a new idea that’s thrown out. And I saw a great article, great article that I think summed it up. A lot of these kids coming through journalism school, and now they’re out in what I call them social media journalists is what they are. That’s what, they’re social media journalists.

Mike Papantonio: And so these social media journalists, a lot of them didn’t even study civics. They didn’t study constitutional law to even understand the importance of the first amendment. Take, I mean, you do. You’re the exception. You came up with that same generation man.

Farron Cousins: Right. And I think the best example of that, which actually Bari Weiss talks about is the recent op-ed in New York times by Tom Cotton. Tom Cotton puts out this horrendous op-ed says, let’s send the military to take out the protesters. It was horrible. It was absolutely against what this country and constitution says is okay. But it was important to put it out there. A lot of people on the left, a lot of my friends and colleagues furious that it was out there, but that’s the point of it. It gets people talking. It gets people thinking. And even if you disagree with it, it shows you what those other people are thinking. And to be honest, puts into perspective how extreme some of them can be.

Farron Cousins: And we need that. We need discussion.

Mike Papantonio: We’re going stay, we’re going to stay on this topic a little longer and here it, here’s, here’s my take on it. When we get to the point where you have a bunch of intolerant kids who really don’t understand the importance of constitutional rights, they don’t understand how dangerous it is. Look they, maybe they didn’t read animal farm.

Mike Papantonio: Maybe they didn’t read it. Maybe they didn’t read 1984. Maybe somebody in school never said, here’s the dangers with, with you not permitting somebody to say something, even though you disagree with it. And I don’t know how you jumped through it, man. I, I’m always fascinated, I keep coming back to you, because I’m always fascinated. You came out of it. You know, when, when you came to work with me, I recognized, well, you know, you, you call balls and strikes. These kids can’t even call balls and strikes. The New York Times has become garbage because we can’t read it without suspecting that it’s being driven by ideology. Okay. It’s ideological trash. It’s not news reporting.

Farron Cousins: Right. And look, I disagree with most of what Bari Weiss has had to say. I don’t even think she’s being forthcoming in why she resigned. I think there’s something else there. She is not underprivileged. She charges $50,000 to go out and give a speech. She is not being silenced. But there are legitimate concerns with the New York Times like we have discussed because we’ve discussed the New York Times being trash for years. I mean, goes back to the Yaz story that they wouldn’t print.

Farron Cousins: And, you know, like Donald Trump says, the media is horrible. Well, it is. But not for the reasons you say and that’s how I feel with Bari Weiss. Yeah, the paper is bad.

Mike Papantonio: When I saw what they did to Lee Fang, some itty bitty brain, some, one of his or his coworkers with an itty bitty brain was offended by some nonsense. He didn’t, I read it. It was nothing, but she was offended about it because it’s like these kids grow up with and they start believing that the bumper stickers on back of their car, that mom and pop put on the back of their car saying, my kid’s really bright. My kid’s exceptional. They grow up with that. And unfortunately it’s made their, it’s just, it’s made them not into objective thinkers, not into journalists, but as into pathetic ideologues.

Farron Cousins: Right. Well, and they also, they do kind of have this, you know, this isn’t just limited to them. It’s, it’s a lot of people, not just that generation, either. They have an undeserved, an unearned sense of I’m the best at what it is I, you know, you do have to earn, arrogance has to be earned. And these folks just haven’t earned it yet.