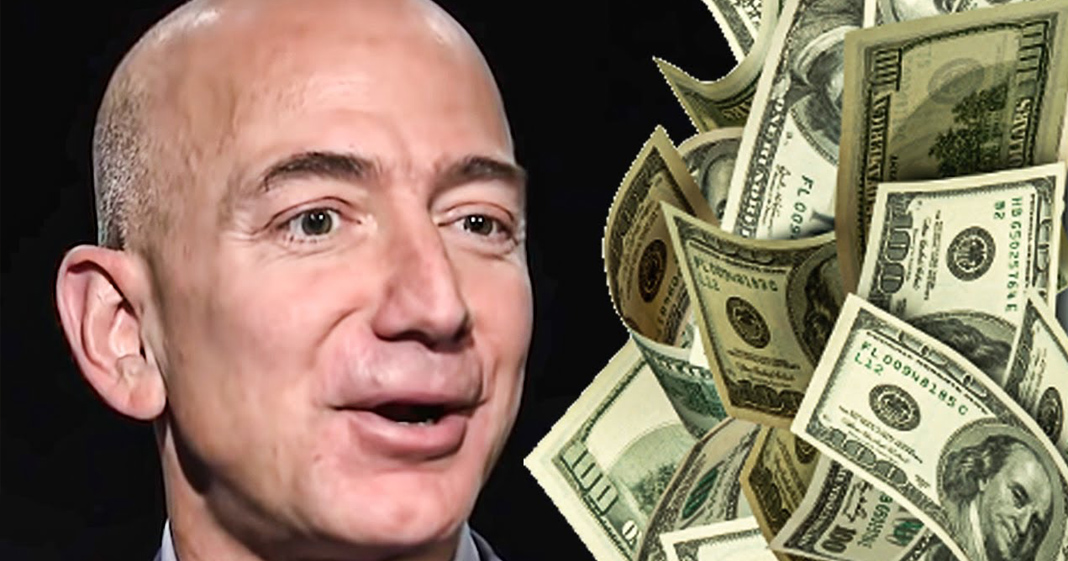 Amazon founder Jeff Bezos is making more money than any other human in the history of money, and on Monday of this week he pulled in another $13 billion. The man could be doing all manner of wonderful things with this money, but instead he is just hoarding his cash as if he can take it with him when he leaves this world. That money is serving no purpose, and Bezos isn’t making anyone’s life better. Ring of Fire’s Farron Cousins explains why this is the problem with runaway wealth inequality.

Amazon founder and owner Jeff Bezos made $13 billion on Monday $13 billion in one single day, one 24 hour period, $13 billion. Put that in perspective, folks that is over $500 million per hour that Jeff Bezos made on Monday. That is the single largest increase in an individual’s wealth in the history of wealth, the history of humanity, nobody ever anywhere for any reason has ever made that much money in a single day. Bezos net worth has grown from 74 billion at the beginning of the pandemic to 189 billion today after the $13 billion Monday that he had at the same time, his workers are making poverty wages over a month ago. He cut their $2 per hour hazard pay because you should be fine by now where your mask here is some hand sanitizer. What more do you want from me? You’re not getting an extra two fucking dollars an hour because I need to make $13 billion in a single day here. Here’s why this is ridiculous. If Jeff Bezos was paying every single one of his workers, a living wage and not just a living wage.

So let’s talk about, you know, 1%, 5%, 10% wages. If everybody working at Amazon from the people packing the boxes to the people, sweeping the floors. If every one of them was making a base salary of a hundred thousand dollars a year with full benefits, guaranteed vacation time, uh, didn’t have to work overtime. Didn’t have to work a second job. If everyone at every single entity that Jeff Bezos owned had those luxuries and was well taken care of and didn’t have to piss and water bottles while on the clock, I might be okay with that $13 billion Monday, if in addition to paying his workers, a living wage, Jeff Bezos was also out there doing something to end world hunger or doing something to clean up the environment more than just putting out some flashy ads about Amazon. We’re going to be carbon neutral. If you were actually doing something to make humanity better, if you were spending your money for the good of the planet, the people in the environmental like, and you were still just accumulating so much, even with spending so much, then I would be okay with it.

Anything short of that? Nope. Cause you don’t need that much money. That is more than 4,000 times. The amount of money that the average American worker will make in their lifetime. And you made it in a single day and you’re doing nothing, nothing material to give back to your workers, to society, to this country because you’re not paying your taxes. You’re a sponge. You’re a leech on the system and you represent everything that is wrong with this capitalistic system under which billionaires should not be allowed to exist. As I said, if you were using this money and spending it as fast as it came in on things to improve the lives of other people, I would be okay with you being a billionaire with you amassing that kind of fortune because you would be using it for good. You could still have the biggest house ever known to man.

If you were a good human being and you were giving back giving more than you get, but you’re not. You’re using this, the hoard wealth, your taking resources away from areas that desperately need it. And what I mean by that is your workers don’t have proper care. They aren’t making a livable wage in many areas, but you are putting that money back in your pocket. You’re taking that resource away from somebody that actually needs it. You don’t need another billion. You don’t need another dollar for the rest of your life. Even if you lived a hundred more lifetimes, you wouldn’t need another dollar, Jeff. So how about you put that money to good use by giving it to the people who do you don’t have to just walk up to them and say, Hey, here’s a million dollars. You could walk up to them and say, Hey, here’s healthcare. And not just an insurance plan where you still have to go. No, no, no, no. I’m so rich. I paying all your copays and deductibles, no cost to you. You go out there, you take care of yourself and I’m going to help take care of you as well. You could do that. You’re not. And you never will because you’re a greedy jackass.