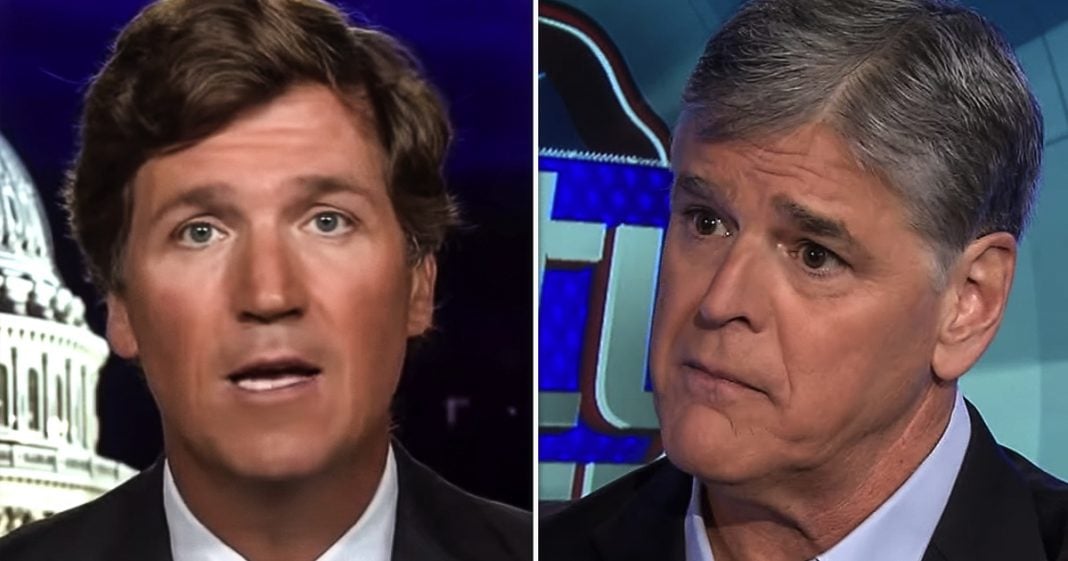 Fox News hosts Tucker Carlson and Sean Hannity have been accused of sexual harassment in a new lawsuit, and former Fox reporter Ed Henry is being accused of rape in the same suit. These are very serious allegations against the hosts and the network, but they are unlikely to yield any kind of change at the company or in their primetime lineup. Ring of Fire’s Farron Cousins discusses this.

According to a bombshell new lawsuit filed on Monday. Two women are accusing various Fox news personalities. One of them of rape and the others of sexual harassment. Here’s what’s going on. Uh, two women filed this lawsuit begins the network. One of them says that former Fox news national correspondent, Ed Henry raped her. And the other woman claims that several Fox news personalities, including Tucker Carlson and Sean Hannity sexually harassed her. Now, Fox news appears to be taking the allegations against Ed Henry seriously because they fired him when they knew that these allegations were about to come forward. Uh, he was fired just a few weeks ago, so they knew that was going to be bad. So they decided to get rid of him with regard to Tucker Carlson and Sean Hannity. Well, those guys are still on the network. However, Tucker Carlson did just go on that sudden vacation as Fox news hosts typically do whenever something bad is about to happen or whenever something bad has just happened.

In the case of Tucker, it was both. He had been doing hugely racist things on this program. And of course, Fox news knew that these allegations were about to drop. So that’s why that happened. Now. Here’s what the lawsuit test. Uh, the woman accusing Ed Henry of rape says that, uh, you know, he had raped her. His attorneys say that, Nope, this was a consensual sexual relationship, but of course, once the relationship was broken off, then Ed Henry wanted nothing to do with her. Wouldn’t uh, put her on the air because this woman was a frequent guest on Fox news. But according to her lawyers, she did, even though she wasn’t a real employee, she did fit the definition of technically being an employee at the network, which is why she is allowed to Sue, uh, at Henry allegedly, according to the suit, once she didn’t let her him rape her anymore, uh, wouldn’t put her on the air.

The other woman, uh, was a producer at the network. And one of the things that she says in the lawsuit is that, uh, prior to, uh, on Hannity’s show, one evening, he took out $100 bill, slopped it on his desk, in the studio in front of the entire production crew said, somebody, please take this woman on it. Date here’s a hundred bucks. Take her on a date to Del Frisco’s steakhouse right across the street from the Fox news studios in Manhattan. Uh, take her on a date to Del Frisco’s please date this woman, you know, totally embarrassing her, essentially shaming her for not being able to get a date in front of every single person that she works with at that network. She had reported obviously that this made her feel very uncomfortable and yes, this was absolutely inappropriate behavior. She then says, okay, different incident, Tucker Carlson, let her know that he’s going to be staying in a hotel in New York city that evening and that his wife wouldn’t be there, that his kids wouldn’t be there, but that she should be there when she politely declined.

Tucker Carlson essentially, uh, cut her off. Oh, actually, I’m sorry. This was the, uh, the woman who was a frequent guest because after she declined his invitation, this is the woman who accused Ed Henry, uh, after she declined Tucker’s invitation, she stopped getting appearances on his show. Two, he retaliated against her. What we know about Fox news is that over the years, over the decades, really, they have fostered an environment that is hostile towards women, you know, through Roger Ailes, Bill O’Reilly, uh, lots of other folks at the network that have come and gone over the years. This is the culture there. This is what happens. And even though they got rid of those past bad apples, it’s still there. The culture never changed, changed. So it, it wasn’t all coming from Roger Ailes. It wasn’t all coming from Bill O’Reilly. There is something serious happening inside of that building across the street from Del Frisco’s.

These men are sick. These men are disgusting. And these men with the exception of Ed Henry are absolutely not going to be punished. That’s the worst part of all of this. And Henry likely will be. In fact, Fox news said, Hey, we’ve looked into the allegations and all of them, except the ones against Ed Henry are false. That’s a weird statement to make either. They didn’t look into the ones against that Henry, because you can’t tell from the way they said it either they didn’t look into those or they determined those to be true, but they say, no, no, no, no. The stuffing is Tucker. This stuff against Sean. That’s all false. None of that ever happened well, can [inaudible] the way those things went down. I’m pretty sure we’ll be able to verify whether or not they did, but it won’t even matter. It’ll matter in terms of the lawsuit.

Sure. But in terms of punishment, this network is not absolutely not going to do anything to their two highest rated stars. They’re, they’re not, you’re kidding yourself if you think they well, you’re kidding yourself. If you think that a little bit of sexual harassment is enough to get a Fox news star fired bill O’Reilly. He got fired because he cost the network tens of millions of dollars that they then lied about to their shareholders. And that caused a big stink. Rich people lost money. That’s why Bill O’Reilly got fired. It’s not going to happen to Tucker and it’s not going to happen to Sean Hannity. And even if it did, they’re just going to go somewhere else and either start their own network or get picked up by the blaze. I mean, Tucker Carlson is the daily caller guy, anywhere daily wire. I forget which one, he’s one of the daily idiots. They have outlets still. You’re not going to get rid of them, nothing changes, but what does need to change as the culture at Fox news, this is not a safe environment for women to be working in it. Wasn’t when Roger Ailes was there. It wasn’t when bill O’Reilly was there. And apparently as long as all the people who grew up under those men, men are still there. It’ll never be safe for women to work there.