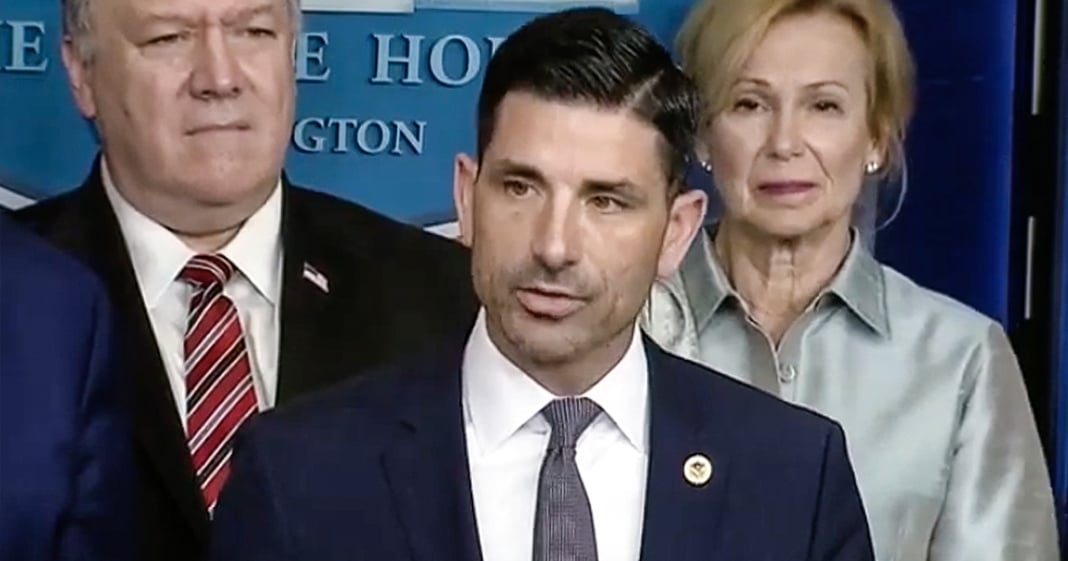 Acting Homeland Security Chief Chad Wolf admitted on Fox News Tuesday evening that the arrests being carried out by DHS officers in the city of Portland are “proactive” arrests, meaning that they are taking place before a crime has been committed. They are now policing crimes that don’t even exist yet, further proving that the United States has inched even closer to becoming a sci-fi dystopian nightmare. Ring of Fire’s Farron Cousins discusses this.

Donald Trump’s acting chief of Homeland security, Chad Wolf, which just happens to be the most bro tastic name ever. Uh, sounds like it should be really soft core porn, but either way, Chad Wolf sat on Fox news Tuesday evening that the arrests that these unmarked DHS agents are making in Portland, Oregon might actually be illegal because according to Wolf himself, these are quote proactive arrests proactive, which means we think these people are going to commit a crime. We don’t necessarily know, and they haven’t necessarily done one yet, but we’re arresting them anyway because we don’t want them to commit a crime and then us not be able to arrest them. So let’s just arrest them before. The fact here is word for word, what mr. Wolf had to say the department, because we don’t have that local support that local law enforcement support are having to go out and proactively arrest individuals.

And we need to do that because we need to hold them accountable. This idea that they can attack federal property and law enforcement officers and go to the other side of the street and say, you can’t touch me is ridiculous. So a little bit of a clarification on that, by the way, uh, because yeah, Donald Trump issued the executive order saying that if you attack any kind of monuments that you, anything like that, uh, you, you, you’re going to be arrested. It’s a, you know, an act of terrorism essentially, but it’s, if you’re on federal land, if you’re on federal land, yeah. The federal officers have jurisdiction. You step off federal land, which is what he’s talking about. Going to the other side of the street. Suddenly they don’t have jurisdiction. They can’t touch you. So what Chad Wolf is worried about is you running to the other side of the street, spray, painting a federal building or statue, and then running back to the other side and saying, hi, you can’t get me.

Like this is a fricking game. And he says, we don’t have the support of local law enforcement, which means yeah, local law enforcement. Isn’t helping out saying, okay, note, we saw you, you ran to the other side. Now we’re going to have to carry you back over here and let these Brown shirts throw you in the unmarked van to take you away to their black site. Local law enforcement is saying like, yeah, we may be bad, but we’re not that bad. But Chad Wolf is in shad. Wolf’s thugs are in Donald Trump’s certainly is. It is illegal here in the United States, by the way, to arrest somebody before they’ve committed a crime, you can’t, you can’t do that. But that is exactly what Chad Wolf is doing. This, this isn’t America anymore. I know I’ve seen a lot of people in Sarah on Twitter saying like, Oh, it never was bullshit folks.

We’ve never seen it like this. Not in our lifetimes. It has never been like this. We have never seen federal agents going in and arresting people before they’ve committed a crime. No, I’m sure some people, if you live during the civil rights move, yeah. You have seen this before. I haven’t, this is a little bit new to me and it’s still a little bit shocked. Okay. But for the people who say, Oh, this happens all the time. No honest to God. It really doesn’t. It’s happened a few times and history and every time it’s happened, it’s been followed by systemic radical change to the way things work, because that is the only thing that works in response to this. So we can either hope that this outcome is going to be great, or we can watch our country disappear before our eyes, as Donald Trump and his Brown shirt, thugs continue to go out there and arrest people for crimes. They haven’t even committed.