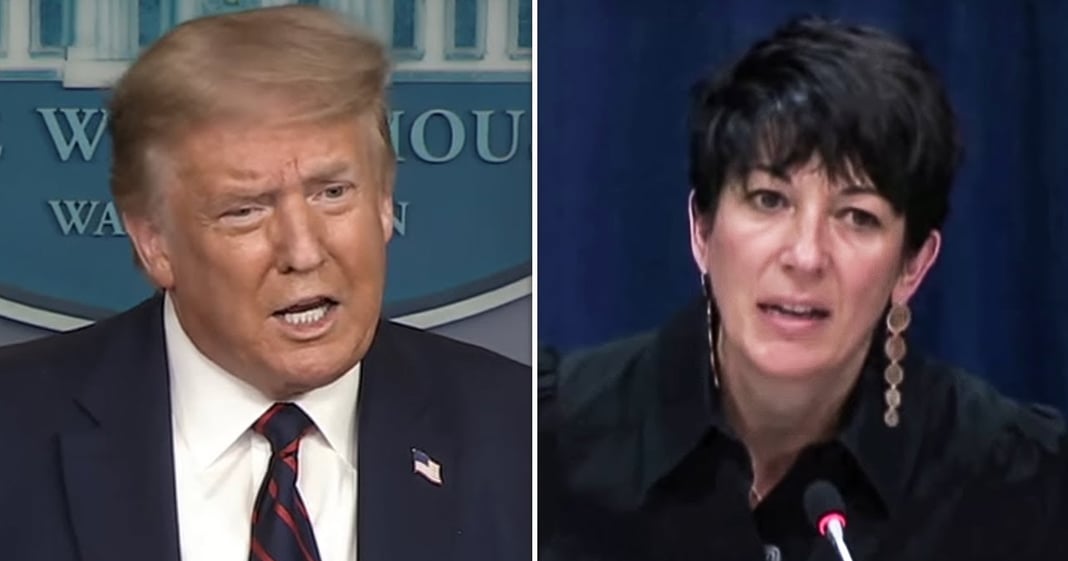 During what was supposed to be a White House press briefing about the coronavirus pandemic, Donald Trump was asked about accused sex trafficker and Epstein accomplice Ghislaine Maxwell. Trump said that he wishes her the best and that the two had met each other on several occasions. That’s probably not the kind of thing you should be saying out loud at this point, as Ring of Fire’s Farron Cousins explains.

Yesterday, Donald Trump held his first white house press briefing on the coronavirus pandemic since April. And for some reason, he was asked about just lane Maxwell, Jeffrey Epstein’s accomplice, who has been arrested and accused of helping groom women and sexually trafficking them. So Trump was asked this question during the coronavirus press briefing, and rather than doing something intelligent. Cause obviously Trump is linked to Maxwell. We’ve all seen the pictures. We’ve seen the videos of him dancing with Epstein, looking at women, judging them. We know that that happens. So rather than try to play it off and be like, listen, Hey, this is about coronavirus, right? We’re in the middle of a pandemic. How about we stick to the subject here instead Trump decides to, okay, I’m going to go with you. I’m going to answer your questions about just laying Maxwell. And I’m going to say the following.

He said, I don’t know. I haven’t really been following it too much. I just wish her. Well, frankly, I’ve met her numerous times over the years, especially since I lived in Palm beach and I guess they lived in Palm beach, but I wish her well, whatever it is, I don’t know the situation with Prince Andrew. I just don’t know, not aware of it, but you’re aware enough to deflect it to Prince Andrew, instead of say, I don’t know your big supporter, Alan Dershowitz, uh, your former president, uh, bill Clinton or yourself. And you’re just like, ah, I don’t want to just lay down Prince Andrew, maybe who knows what a weird thing to say. The whole is weird. Every individual part of it is weirder than the part before it, you could have easily. And obviously understandably deflected this question now. Yes, that would have been dishonest.

Yes. We would have seen through what you were doing and yes, we would still call you out for doing that. Don’t get me wrong. But here’s the thing, man. You didn’t have to answer that question. You didn’t have to wish her. Well, the woman is accused of sex trafficking. She allegedly, according to the documents, traveled the globe and found these underage girls and recruited them, brought them over to Epstein’s private Island then taught them how to sexually please, these old men. That’s what she’s accused of. You didn’t have to. You wish her. Well, you didn’t have, I have to admit that you’ve met her numerous times. We all know that already. You can’t dispute that the evidence is there. Don’t admit to it because you don’t have to even say it. You had the right to remain silent. You should have exercised, but she didn’t the one time you could have actually made case that this was an inappropriate question that this wasn’t the forum in which to discuss this because you were there to talk about coronavirus, to be honest, that really is what you should have done.

And I don’t think I actually would have called you out for that because the public needs know about the pandemic. You had an out, you had an out, but instead you wanted to double down and confirm what a lot of people are concerned about, which is that just lane Maxwell was your friend. She probably knows some dirty secrets and you’re out there wishing her well being nice to have. I’m an accused of sex trafficking that didn’t land well with anybody. And if just laying gets convicted, you can pretty much guarantee that sound bite is going to come back and haunt you or haunt your children. If they ever choose to run for political office in the future.