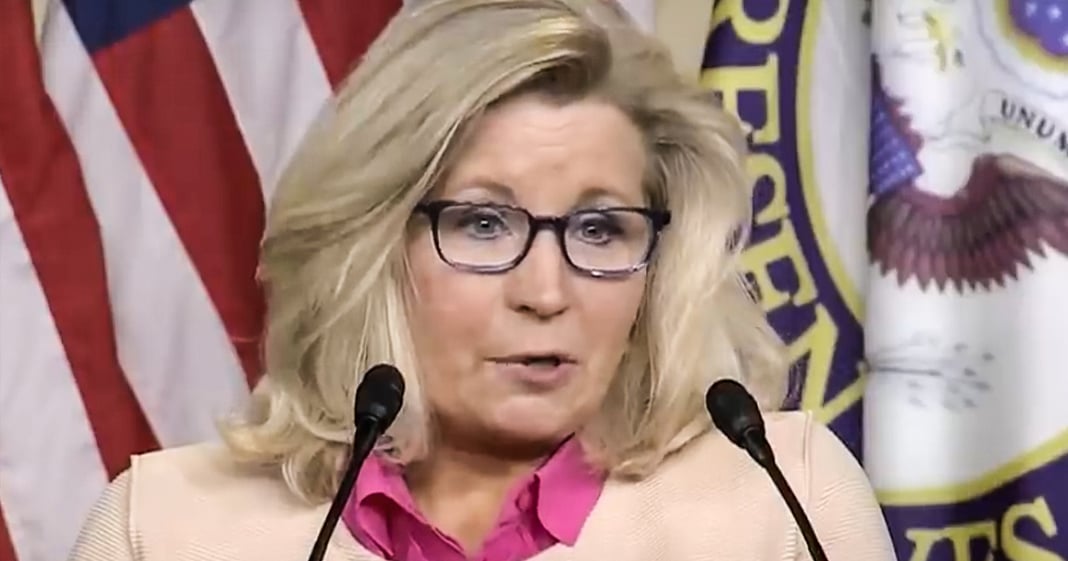 Tuesday was definitely a wild day on the Hill, with House Republicans turning on one another over whether the United States should continue fighting unwinnable, non-goal oriented wars in the Middle East. Liz Cheney believes that the wars should go on forever, while Trump believes that they need to end. And because Trump wants to end our involvement in Afghanistan, his suckups in Congress believe it to, and they spent Tuesday absolutely attacking Liz Cheney for being a Cheney. Ring of Fire’s Farron Cousins explains what’s happening.

Yesterday was a big day for Republicans on Capitol Hill was the first day that they have held an in person, Republican meeting on Capitol Hill in months. Right? They have been socially distancing. They have been working from their districts, you know, telecommuting. They have not been physically in that building all together for a meeting in months. And it immediately devolved into utter chaos once they all got there. Cause apparently not having been together for several months has a really just kind of made these Republicans a little bit irritable. They haven’t been able to air their grievances with one another and by God they were going to do it Tuesday. And oddly enough, all of them seem to have grievances against Liz Cheney. Now can’t I say, I blame them for any of that, except for what some of their grievances actually were. Here’s what happened?

A representative Jim Jordan of Ohio member of the freedom caucus reportedly complained about all the times. Her messaging had publicly conflicted with Trump who currently is receiving dismal ratings from the American people on his handling of the COVID-19 pandemic. Politico said that representative chip, Roy of Texas lamented that his democratic opponent, Wendy Davis had retweeted. Some of Cheney’s tweets, praising Fauci. So Jim Jordan’s out there saying, dang it, woman. You’re not out there supporting Trump enough. You’re contradicting him sometimes in your Twitter feed. And then there’s other chip. Roy comes in with the w whatever. And he says, Hey, my opponent has retweeted you because you said foul cheese decent by God of all the things to attack Liz Cheney for her saying, Hey, foul, she’s not a horrible human being. Isn’t one of them. But folks, this was tamed. This was tame compared to what happened later because Matt Gates King of the idiot, Republicans came out and he says, you know what?

I’m going to get her. I’m going to get her good Matt Gates on Twitter. Where’s this tweet here it is. He said, Liz Cheney has worked behind the scenes. And now in public against real Donald Trump and his agenda house Republicans deserve better as our conference chair, Liz Cheney should step down or be removed hashtag manga. I mean, it’s really interesting that Matt Gates was even able to tweet this out with his lips, surgically attached to Donald Trump’s anus, because that’s what this tweet is. That is Matt Gates, literally kissing Donald Trump’s ass through Twitter, put the hashtag mag in there, dude, I’m in your district. And I can’t tell you how little you’ve done for us. Cause you’re too busy trying to pholate Donald Trump. That’s what’s happening. That what you would like, because we know what you would like, because it did seem to serve a purpose because shortly after you tweeted that about Liz Cheney, Donald Trump, jr.

I don’t know if you’re as obsessed with him as you are as father, but Donald Trump jr. Retweeted your tweet and said this. He said, we already have one Mitt Romney. We don’t need another. We also don’t need the endless war. She advocates for that. You know what? That’s actually something I can get behind, right? Because you got a lot of Republicans right now who are pissed off at Liz Cheney because Liz Cheney is fighting desperately to preserve the forever Wars that her father started. And those are horrible. And those do need to end. And Trump believe it or not wants to pull our troops out of the middle East and Republicans only because Trump wants to pull the troops out of said, Hey, yeah, let’s set these Wars. We’ve always been anti-war. That’s who we are. I know you guys would love to continue these things, but you love to kiss Trump’s ass more.

So you’re going to kiss his ass and call for an end of the Wars rather than saying no, let’s keep fighting them. So that’s what’s happened. You guys don’t actually believe it. But since Trump does believe it, you have to pretend that you do. And therefore you have to attack Liz Cheney. If it was any other Republican president that wasn’t Donald Trump, you would be right there cheering on Liz Cheney to start new Wars all throughout the middle East, Liz Cheney is a horrible human being. Her idea of keeping us troops over in the middle East indefinitely to fight these Wars that have no clear definable goals is absolutely insane and should be classified as a crime against humanity because all we’re doing is going over there, getting ourselves killed. And if we’re not getting ourselves killed, then we’re just killing other people for no reason. Literally no reason because this war doesn’t have a definable goal. There is no definable enemy.

So go after Liz Cheney for that all day long, she absolutely deserves it. This is a woman who, by the way, votes with Trump 97% of the time. But apparently that 97% is not good enough for the Republicans who would like to see that number as high as a hundred percent, anything less than a hundred percent, which ironically Matt Gates himself has also under a hundred percent is unacceptable. Now to me, that’s the kind of thing that is not okay to attack Liz Cheney for just because occasionally she has a mind of her own. Occasionally she doesn’t go with the propaganda coming out of the white house every day. That’s actually the only thing that’s decent about this horrible human being and her horrible Cheney family. Don’t attack her for that. If you want things to attack Liz Cheney on DME, I’ll let you know, I’ll send you the list because there’s plenty of them. You’ll never run out of material, but her occasionally disagreeing with Donald Trump, that ain’t one of them.