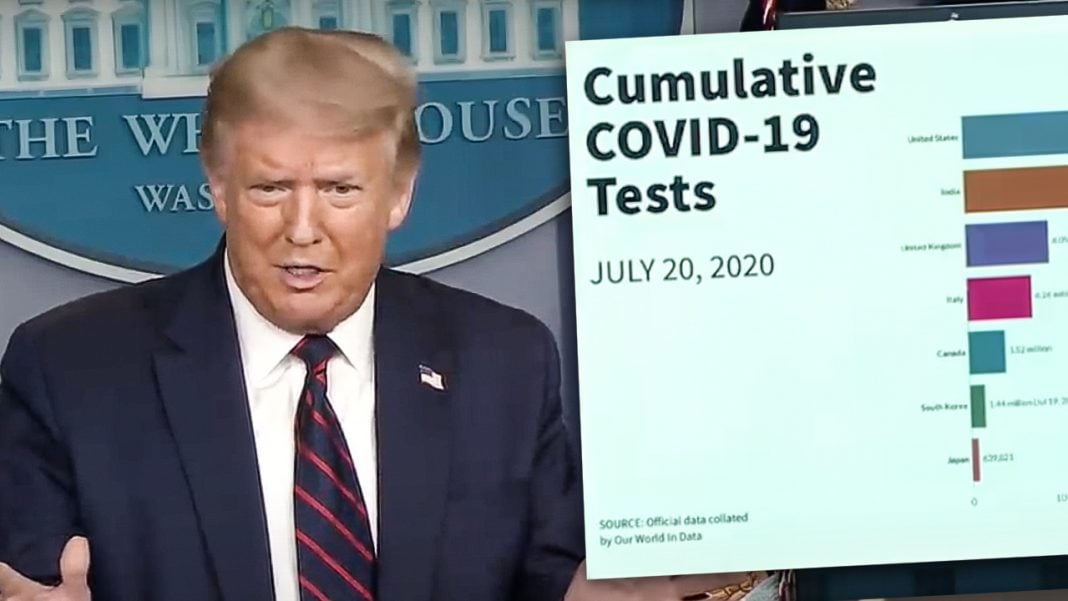 The corporate media once again proved how low their bar is and how easily they are duped by Trump by praising him for adopting a more somber tone during his press briefing on Tuesday. The man still stood there and lied to their faces about a myriad of different things, but all they cared about what his “tone” and one sentence where he said that things will get worse before they get any better. Ring of Fire’s Farron Cousins discusses this.

Well folks for about the dozen time throughout Donald Trump’s entire tenure as president of the United States, uh, yesterday was the day that he became president of the United States, or at least that’s the way the media would like to tell it. And yeah, they’ve said it maybe half a dozen to a dozen times since he became president, because it’s so rare for this man to come out and speak and not be a complete idiot or complete jackass that any time he manages to string a coherent sentence together, that isn’t insulting someone, the media fawns all over it, like it’s the greatest thing they’ve ever seen in their lives. Here’s what happened yesterday. Donald Trump came out during his, a white house coronavirus press briefing. And he said that, Hey, things are probably going to get worse before they get any better, very somber tone. The media described it as somber, somber, somber, somber, every headline.

And they praised him for this tone. They praised him for not coming out and being cocky and arrogant and, and whatever, and acted like this was suddenly somehow the greatest thing we’ve ever seen from the president ignoring the fact that even though he said that one sentence that was accurate, the rest of what he said, he was lying to their faces. He was lying to their faces and they’re out there praising his tone for being a little more somber when talking about it, by the way, yesterday, Tuesday, the day he’s given this speech, we had over a thousand coronavirus deaths, over a thousand people dead from COVID-19 in the United States yesterday alone. And it’s worth pointing that out because he says that the death rate here in the United States is actually going down. Uh, we had not had that many deaths since June 2nd. And he told them in his somber tone that the deaths in the United States were going down and we just had our highest day ever, but they’re going down.

Sure, totally what a somber tone to have. And that’s the problem with the media in general, right? They’re the ones who gave Donald Trump a couple of billion dollars in free advertising back in 2016. Uh, during that election, they do it. Now. They air his rallies, uninterrupted on television. They air these press conferences that turn into essentially campaign rallies. Most of the time, this is absurd. The man is not presidential. The man is not somber. The man has not learned any lessons. And most importantly, the man is not honest. He lied his face off directly to their faces, but because he did it in a more cordial way, because he did it with a very somber tone. Wow. All is forgiven, right? That’s the day he became president. This is crap. And this shows why the media is crap. Donald Trump didn’t say anything yesterday. That was new.

He didn’t say anything yesterday that gave us hope. He didn’t say anything yesterday that gave us the impression that he had this thing handled. All he said was, yeah, you know, it’s getting, it’s going to get bad before it gets better, but it will eventually go away. He said, and he’s back to that one again also said the deaths are going down on the deadliest day ever we’ve had in the United States from it. So yeah, the man’s not somber. The man’s not presidential. He is nothing. He is a creation of the corporate media. And that’s why the corporate media is always willing to coddle him when he has those rare moments. When the tone of his voice, isn’t that of a jackass. That’s about the most pathetically low bar you could ever have for a sitting president.