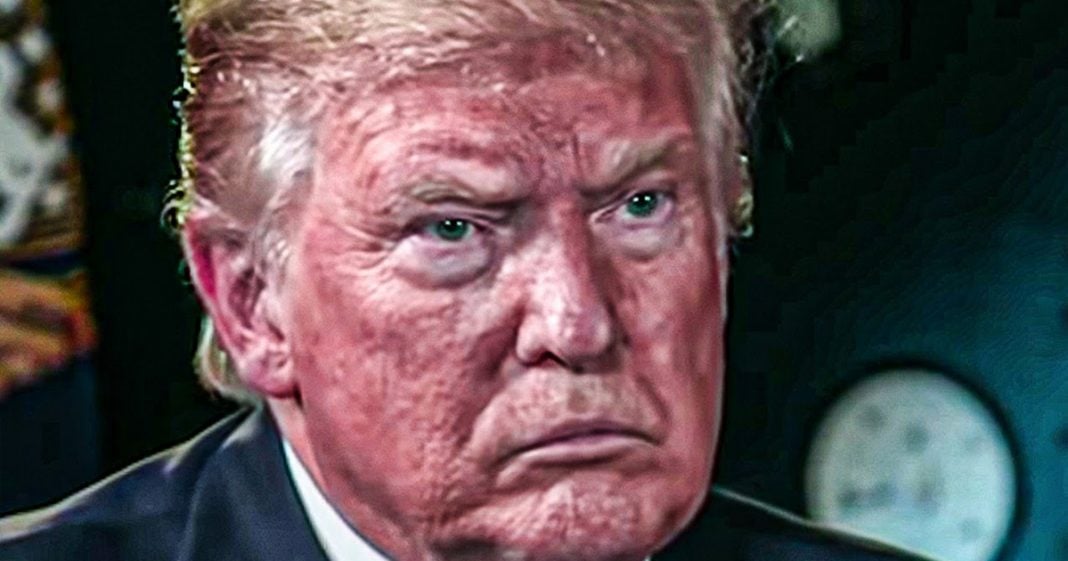 Since the early days of the Trump administration, there has been speculation about whether or not the President would actually leave office peacefully if he were to lose his reelection bid. And now that this scenarios is looking more and more likely, those questions have all come roaring back. But there is good news – it isn’t up to Donald Trump whether he stays or goes, and he doesn’t have any say in the issue. Ring of Fire’s Farron Cousins explains what will happen if Trump threatens to overstay his term in office.

Ever since the early days, the early days of the Trump administration, there has been speculation that when the time came for it, Trump may or may not actually end up leaving office and what, then, then sparks the constitutional crisis. They told us. And again, I’m talking about within the first few months of this guy actually being in office. And of course, along the way, we have seen plenty of these stories pop up every couple of weeks, every couple months, whatever it is. And usually it is fueled by something Donald Trump says, for example, the time he tweeted out that, uh, you know, ad showing Trump 2020 for Trump, 2028, 2032, and all that, uh, repeatedly saying that maybe he’ll run for a third term, who knows. And then of course, this past weekend, when he told Chris Wallace on Fox news, that he may not accept the results of this election. Once again, people are speculating, what the hell are we going to do? If he doesn’t leave office?

And I’m going to say this, hopefully for the last time you’re going to do nothing. You don’t have, have to do anything. There is nothing in the president’s power short of, by the way, uh, getting rid of the constitution itself, unless he does that, he will be forcibly removed from the white. And how should he choose to not go peacefully? I do think there’s gotta be a struggle. Don’t get me wrong. But here’s the thing. It is very clear and United States law at 1159, 9:00 AM. Okay. January 20th, 2021, one Donald Trump’s term ends, no matter what. So when the clock strikes noon Eastern time, he’s not president anymore. I think it’s noon. Maybe it’s 11:00 AM it’s. I dunno, whatever it is, but either way, when he hits that timeline and I might be wrong about the exact time, but I know the day when he hits the time limit, he’s not the president anymore at all.

No matter what, if he wins reelection then yep. He gets sworn back in for a second term and he’s immediately the president. Again, if he does not win the election, the new president gets sworn in. They have all the power. They’re the commander in chief of the armed forces, not Donald Trump anymore. Do you see what I’m saying? Trump wouldn’t have the authority. Nobody in this country would actually have to listen to him. If he said it at noon on January 20th, 21, 2021, I’m not leaving. If he says I’m not leaving, it’s not, Oh God, what do we do? It’s okay. Uh, guards get him the hell outta here. And those guards have to listen to the new president, not the old president. And that’s how that it may be ugly. It might be hysterical. We won’t know. But again, I don’t think Donald Trump’s going to put up a fight.

Uh, I think the secret service would be able to handle it if he did. I think what he will do is be a complete jackass during the transition period. That’s what we actually need to be worried about. We need to be worried about whether or not he is going to cooperate with the incoming president, whether it’s, you know, uh, this year or whether it’s in 2024, we need the presidents to cooperate. Whether you hate each other, whether you love each other, you know, bill Clinton did it for George W. Bush. Even though that election was very clearly stolen. George W. Bush did it for Barack Obama. Obama did it for Trump. Trump’s not going to do it for Biden or whoever. He, uh, loses his throne to in 20, 24. If he gets reelected this year, it’s not going to happen. Luckily, if it happens right now, Biden’s been in the white house before.

He kind of knows how things work. He’s never been in charge, but he does have a good friend who was so that’s where the responsibility is going to fall. We’re going to have to have Obama come back and teach Biden about everything because Trump’s not going to do it. That’s where the problem lies. But in terms of him staying in office past his term, it’s legally not possible for him to do that because if he attempts it, the next person is sworn in. As president can have all sorts of horrible things done to him to force him out of the white house.