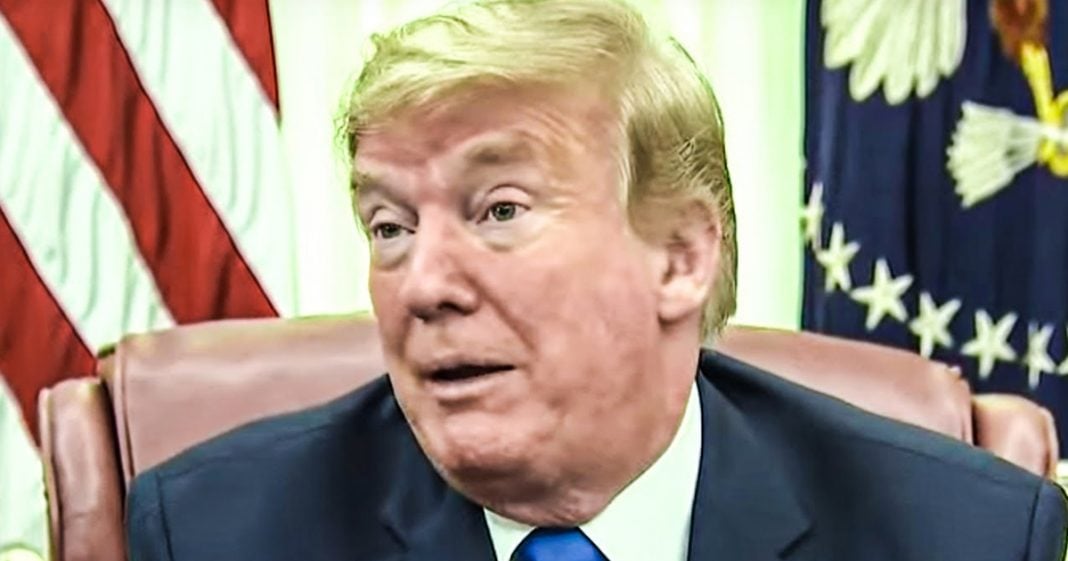 According to new reports, Donald Trump’s aides are having a harder and harder time trying to cheer up the President, so in recent weeks they have resorted to lying to him about poll numbers and reminding him of all of the “beautiful boaters” who support him. These lies seem harmless enough, but the President then brought this alternative reality to our current reality this week during a press conference. Ring of Fire’s Farron Cousins discusses this.

Number seven three, two, one. Donald Trump has been in a bit of a funk for the last, probably two months, maybe even three months. And that is actually according to people who work with him inside the white house. So they’ve had to come up with very clever ways to try to cheer up the president. Uh, we reported last week, you know that back in April, it was, they, they brought in all the big trucks for the trucker appreciation day so that Donald could walk around and see the big trucks and the big engines and the big calves, and feel like a big man for a couple of hours. And ever since then, you know, you can’t keep the big trucks there forever. So you get a little depressed, you see the poll numbers, you get even more depressed. So according to new reports this week staffers over the last two months have had to come up with new ways to cheer up the president.

And unfortunately, those new ways to cheer him up, involve lying to his face and creating an alternative reality for him to live in. Here’s what the reports say, what they’re doing is one they’re lying to him about his poll numbers. They’re saying that all of these polls that are coming out, showing him losing the Biden by 15 points. Now, according to the latest to bowling is fake. It’s fake there’s suppression polls. They’re calling them, uh, you’re actually doing very well, mr. President. I hope that makes you happy for the rest of the day. And if it doesn’t make you happy, they’re going to the second part of their plan, which is to show him photos and videos of all of the boaters for Trump. Now, I’m sure you’ve all seen the pictures. You know, the, the, the weird Trump loving boat owners in, uh, central Florida out on the lakes, they have other big Trump flies, uh, flags out and they’ve, you know, make this giant floating, uh, I guess moron parade.

And he loves it. His kids tweeted out all the time. They love it. What is it about these boats and the Trump flags on them that make the Trump boys so excited? I don’t know that’s a mystery in and of itself, but it does work. So whenever Trump is feeling bad and he doesn’t buy their BS about fake polls, he then goes and watches videos of boaters for Trump, and he feels excited. The problem is this is all an alternative reality. Trump’s own internal pollster. McLaughlin has admitted that there is not enough boaters in the country to keep Trump in office. That that’s not an actual demographic, right? It’s not measurable because it’s so tiny, not just overall number of voters, but then you got to shrink it down to overall number of voters who are diehard Trump supporters. Yeah, it gets real small, real quick.

And they know that, but the president doesn’t and the president, unfortunately earlier this week actually went out during one of his press conferences and started talking about all these things that his staff has been lying to him about. So he ends up lying to the press. One about all the polls being just so far off and not reflective of reality. He said that he said, yo, these are suppression polls. Our own polls that are not suppression. Polls are showing much greater numbers. We’re also doing exceptionally well among boaters. And then he went on and say, we’re doing well with NASCAR V viewers who are doing good with the NFL. No, no, you’re not a college tailgaters. He said was another group. Um, he said, okay, here it is. We also do well with bikers, NASCAR fans, NFL college, and high school, tailgaters, golfers, aviators, RV, people, campers, and homeowners.

I’m pretty sure that like, Like 90% of the country is going to fit into one of those categories. Right? And you can’t be doing well with that. Many people. That’s crazy. And that is what this man is now. And it’s not, yes, he has it in himself, but also you don’t feed the crazy, but that is what his staff is doing. They’re out there telling him, you know, or feeding his delusions basically is what they’re doing. He already thinks these horrible lies that he says he believes their reality. And so when you have these enablers come in and reinforce that that reinforces the psychosis on, on the patient, essentially, that’s what he is. This is dangerous. What these staffers are doing. I know they’re trying to make for a better work environment for themselves by, by cheering him up and making him not so grumpy. But what you’re doing is you’re putting American lives at risk by convincing this crazy person that the alternative reality he’s created in his head is the only thing that’s real. That’s dangerous for you. For me, for everyone in this country. And his staffers have become his biggest enablers.