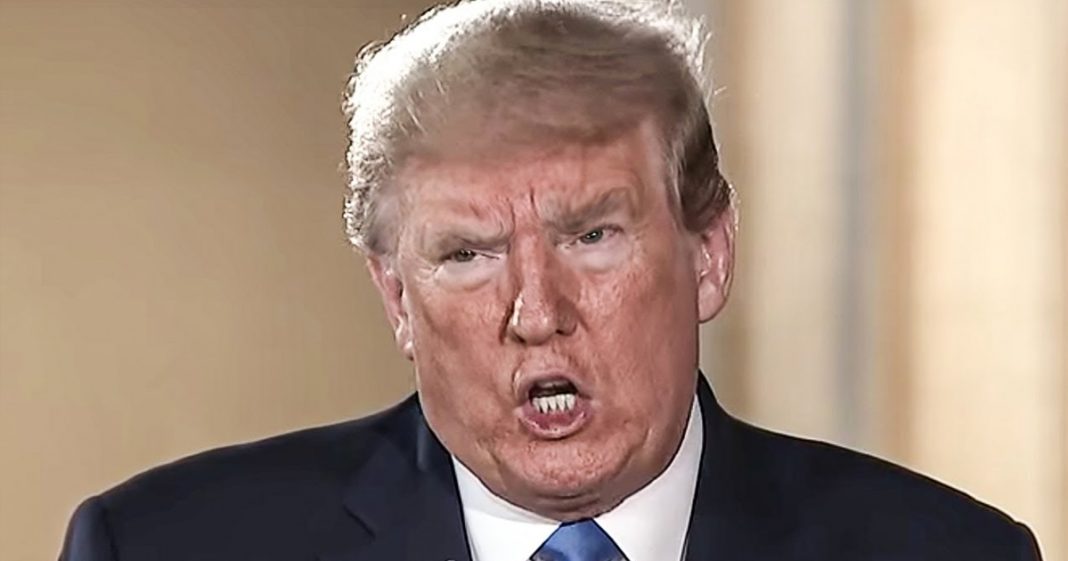 Donald Trump refuses to back down from his push to reopen schools in a few weeks, even as the number of new Covid-19 cases continues to climb nationally. The President is out of his mind, and the public is fully aware of it. The latest polls show that a majority of the public is not with Trump on this one, and they believe that it is an incredibly dangerous and stupid idea. Ring of Fire’s Farron Cousins discusses this.

Donald Trump was hoping that his push to reopen the schools in this country was going to help him politically, after all, everything, this man does has some kind of self serving purpose to it. And the push to reopen the schools, he thought was going to be a surefire where to way to boost his sagging poll numbers. Unfortunately, for him, it’s actually done the exact opposite as a majority of people in this country is slim majority, but a majority nonetheless believe that reopening the schools right now, or even next month, or even in the fall would be a very, very bad idea. And as such, this is not going to help him politically. What so ever now it’s easy to gloat about that, right? Like ha ha. You wanted to do a thing and it backfired on you. People hate it, just like they hate you, except for this thing is actually still going to happen.

And this thing that he’s doing pushing to reopen the schools, people will die. We’re in the middle of a pandemic, a V very spreadable virus is ravaging the United States right now. And yes, it is going to get into the schools and yes, we are going to see more children die. And yes, I understand the data says that it’s harder for children to catch the disease. And it’s harder for them to spread it to adults than it is for an adult to spread it to another adult. And that does have to do with the proteins present in the body, the proteins that the virus binds to. There’s just more of those in older people’s bodies than there are in younger people’s bodies, but it is not impossible for younger people to catch the virus or spread it to older people. That is still a very real thing that has very, really happened. So no, there is no safe way to actually do this.

And Trump was hoping by the way that this was going to help him with kinda, you know, the, the suburban mom vote, right? Those are typically swing voters, no real strong opinions, one way or the other, just, I want to be able to protect my way of life. Can you do that? Can you protect my family? Can you make sure my kids are safe? And Trump was hoping to show them that, Hey, I got your kid’s best interest at heart. I’m sending them back to school. I’m freeing you up. So you don’t also have to be the teacher. I’m sorry, taking care of you. That was the message he wanted to send, but instead he’s sending the message. I don’t care about your kid. I don’t care if they catch the disease. I’m worried about my poll numbers. I’m worried about losing this election and the, the people understand that here’s the numbers folks.

53% of voters oppose, fully reopening daycares in K through 12 schools, 50% oppose, a full reopening of colleges and universities and 65% oppose Trump’s threats to pull federal funding schools that don’t reopen. I’d say those numbers are pretty clear, no real mystery there. We know what the American public wants. And here for me is the sad, sick and twisted part. Everybody’s saying at least these Republicans who pushed for reopening that we can’t do the digital schools anymore. We can’t do virtual schools. We can’t do distance learning. And to that, I say, that’s completely wrong. We had school districts that were able to throw together this distance learning stuff in a week and a half. It was Rocky. Yeah. But they were able to do it. They got weeks before school starts, hell some places have a month and a half before school starts. That is more than enough time to get this infrastructure in place.

And if in fact, you do have students who are unable to do the distance learning, or if you have parents who are unable to stay home and teach their kids, which I assume there are lots. Guess what? You have plenty of time to get those schools ready, put up the little partitions that they’ve had to put up in the grocery stores, right? The plexiglass distance, the desks, you know, instead of having your, your elementary school kids all clumped together, their desks, you know, in little groups and clusters spread them apart. Oh, that’s right. You won’t give schools the money to do that. Silly me here. I am offering real world solutions that we still have plenty of time to implement. That would actually help your plan. But you refuse to do the second part of your plan, which is actually fund it. And as such, there is no safe way to send our kids back to school. Donald Trump is sending them on a death March because he thinks it’s going to help with this post. Hopefully he sees these numbers and hopefully he understands that his numbers are getting worse because of this. Because if he doesn’t reverse course will be a lot of kids go into an early grave before Christmas, this year.