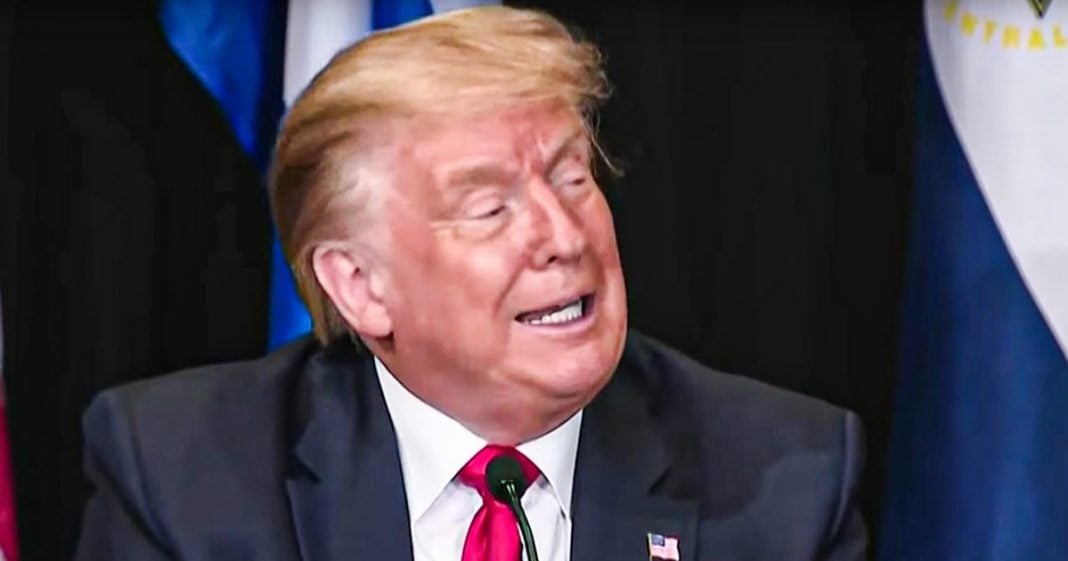 Donald Trump is demanding that schools start reopening next month, and most people agree that this is a recipe for disaster. But Trump isn’t concerned with the education of our children – his reasons for getting schools back open are far more sinister. He believes that reopening our schools will be a catalyst for getting ALL workers to go back, but that can’t happen without a massive surge in infections and death. Ring of Fire’s Farron Cousins discusses this.

Donald Trump has been pushing very hard for schools to reopen this fall. And in fact, even saying, this falls a bit of a misnomer, because depending on where you live in this country, school starts, uh, for some of us in a little under a month. But nevertheless, even though we are seeing a massive spike across this country in total number of new COVID-19 positives, Trump insists that schools are opening in the fall and he is threatened that if they don’t, he will illegally cut your federal funding, which he can’t do. He’s threatening to do it. He has no legal authority to do it. And that could lead to very well. Another impeachment for him, if the Democrats had any kind of spine on them, but that’s the reality in which we live right now. So the question is why, right? Why is Donald Trump so insistent that our kids go back to school and risk getting infected risk, infecting their teachers and risk sending those infections back home with the children every day?

Why? And the answer is simple. It’s far more sinister than we think he doesn’t care. If these kids get sick, he doesn’t care if these kids bring the illnesses home. What he knows is that if the kids stay home, the parents can’t go back to work. If the parents can’t go back to work, the economy can’t function the way that he needs it to function in order to win reelection, to put it another way, your kids have to be the sacrificial lambs that he is sending off to slaughter so that you can go sacrifice yourself at the alter of big business. That’s what he wants to happen, because that is the only way making all of those different sacrifices that he is going to be able to pull out a victory in November. He knows that most of the public understands that the economy was the only good thing that he had going for him.

The pandemic has strip that away. And the reason the pandemic by the way, was able to strip that away from him was cause it was all a farce. The economy was not actually as strong as everybody had been telling us. It was when the economy came, crashing down and then we had the bailouts and the rebuild and the new regulations, none of them actually helped put more money in the pockets of American workers. None of them actually helped us be able to create any kind of savings that would prevent us from going under. If we didn’t have a job for two months, see that was the problem. We gave money to the rich people. We gave money to the corporations. We help bolster the stock market. Not only did we do that after everything came crashing down in 2008, but we did it again throughout the early days of this pandemic, the American public got 1200 bucks, some members of the American public, I think a little under half the country got 1200 bucks.

And that’s why we have to go back to work. We know it’s dangerous. We know it’s stupid. We know that we don’t have safety precautions in place, but that’s what they’re forcing us to do by not helping us out. It’s either that, or we lose our cars. We lose our houses. We default on other debts. We destroy our credit, which is also another made up thing. That’ll determine whether or not we can borrow more money and go deeper into debt. That’s what credit is. But that’s why the kids have to go back to school. Cause if the kids don’t go back to school, first, none of that other stuff can happen. The irony here, the irony that Donald Trump does not understand is that by going back to normal right now in the middle of a massive surgeon cases, that’s going to bring on the second wave.

Actually. It’s not even going to be able to be called the second wave cause we never actually overcame the first wave. The surge right now is still part of the first wave. But when we golf, when we all go back, if we haven’t gotten this under control, if we don’t have the safety precautions in place, which we do not at the moment, I, God damn it. Like we have idiots in this country who were out there openly protesting because they don’t want to wear a Miocic, like go straight to hell. Right? You’re really that much of a frickin infant. I guess that’s a conversation for another day. Something that’s freely, obviously eating away at me because I’m just shocked. You know, I know people are stupid in this country. I know what I get it. I see it every day. I’m down here in the deep South folks.

I see it. I just never knew the extent of it till you watch these morons freak out about wearing a mask. And do you think that those people freaking out about masks who are still going out there ordering at restaurants, dining in not social distancing, going to parties, doing all that. Do you want your kid in school next to theirs? Because even though kids have been statistically a little less susceptible to the virus, they can still get it. They can still die and they can still spread it. I don’t want my kids going to school with those morons. And unfortunately where I live, all I am is surrounded by morons, half the people around here aren’t wearing masks. And I think half is actually being generous. I think it’s well over half that are wearing them, but Trump doesn’t care. He wants your kids to go back to school. He wants them to be near those people. He wants them to be next to him because that is his phase one for getting this economy up and running before November. Otherwise he’s out of the white house in January.