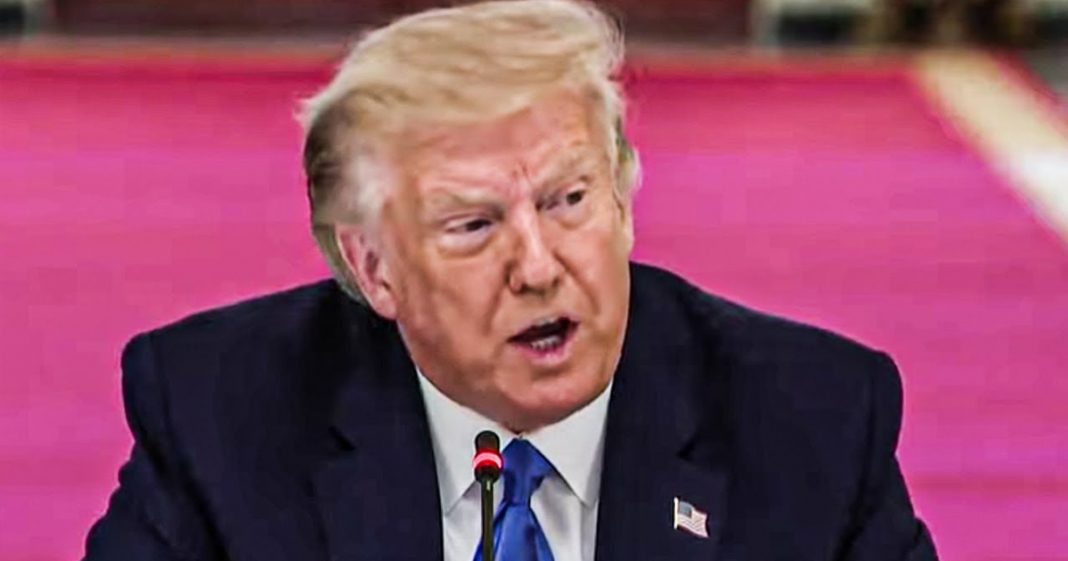 The President is drunk with power, and painfully ignorant of the law. Earlier this week, he actually threatened to “take over” what he called “crime-ridden” Democrat-controlled cities because they were in such bad shape. There is no truth to this statement, and there is no evidence to suggest that crime has taken over any US cities. Ring of Fire’s Farron Cousins explains Trump’s bizarre rant.

Donald Trump claimed in a little, uh, impromptu, I guess you’d call it press conference earlier this week that if he sees necessary, the federal government may actually have to step in and quote, take over certain cities in this country. Because according to Trump, the crime rate is just out of control. Here’s the clip of Donald Trump claiming he may have to take over cities in the United States, take a look. So things are happening that nobody’s ever seen happening happen in cities that are liberally run. I call them radical lip and yet, uh, they’ll go and March on areas and rip everything down in front of them. If that’s what you want for a country, you probably have to vote for sleepy Joe Biden, because he doesn’t know what’s happening, but you’re not going to have it with me. So we’ve been very strong on law enforcement. We’ll be doing things, uh, that you’ll be, I think very impressed with numbers are going to be coming down. Even if we have to go in and take over cities because we can’t let that happen.

Yeah. Okay. First and foremost, um, you don’t have the authority to do that. Uh, somebody might want to do something about this man thinking that he has the authority to just walk into any city in the country and say, guess what? This is ours now, uh, leadership, I’m removing you. And I’m calling the shop. Not, not how that happens. Um, the man’s drunk with power, but he’s also stupid with power. And that is a very dangerous combination here. He thinks he is above the law. He thinks he can just make these outrageous claims and never have to face any kind of consequences for it. And everything he’s saying is based on a complete and total lie, by the way, don’t you think if we were having some kind of massive crime spree here in the United States, in any city, don’t you think he’d hear about it every now and then don’t you think that that would be the top news everywhere?

And I know any Republican watching this is going to say, they’re not covering it. Cause it’s the liberal cities doing it. I told you, okay, that’s not true. That’s not true. That’s not true. See, interesting thing, folks, crime stats, actually, something you can look up and you can look those up in real time. I suggest you do that. So if you think that, Oh my God, things in Chicago are, are so bad. You know, it’s the black on black crime in Chicago that we always hear from Republicans. Um, you can look it up and it’s really not any worse than any other major city in this country. Regardless if it’s Republican run or Democrat run, sorry, you’re talking point has never been true, but you use the Chicago so bad. It’s dog whistle. You know, there’s, there’s lots of black people in Chicago. You can’t go full racist and be like, look at Atlanta or Macon, Georgia.

Right? So you have to go Chicago, right? You know, kind of played Louise. Your Chicago’s corrupt. Chicago’s all this stuff, except it’s no more corrupt. It’s no more violent. It’s no more crime ridden than any other city in this country, crime across the board here in the United States. Folks, believe it or not is actually been going down over the years has for, for decades. Now, Trump is lying and he’s lying because he wants you to be scared. He wants you to think that we have these lawless cities out here spread across the United States and that only he can save you from them. Then let me ask you this who’s president of the United States right now, if things were as bad as Donald Trump says, they are, doesn’t that reflect poorly on him. Wouldn’t that signal that maybe we should have a change in leadership, right? He is the president after all. And if this country is going to shit, I guess it’s because he allowed it to that alone should be grounds for dismissal.